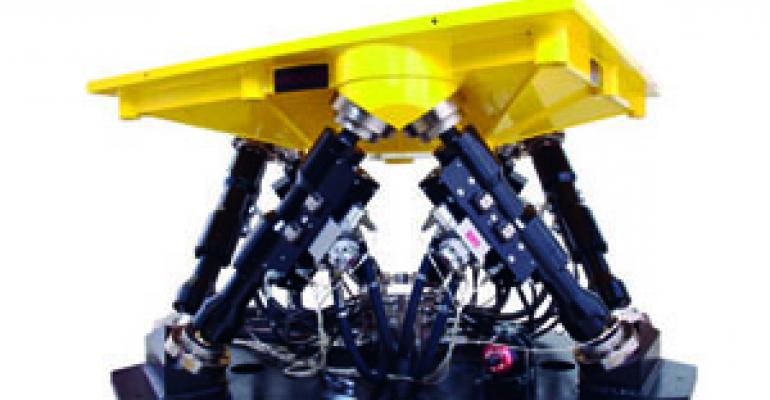 Control refinements to a six degree of freedom hydraulic hexapod used for automobile testing and simulation is producing more versatile and expanded testing capabilities for Exova Corp., a global, independent automotive testing facility. The hydraulic simulation table from Moog Inc. simulates acceleration and displacement outputs, and reproduces key data collected on proving grounds and other road/field surface events. It offers vector-based motion, and can perform translation and rotation functions in conjunction with an expanded frequency range up to 100 Hz.

"The system is similar to a flight simulator that leverages core motion control technologies in the areas of hydraulic valves, hydraulic actuators and closed-loop control," says Tobe Ehmann, product application manager - simulation for Moog Inc. "The design goal is a high-performance system that provides customers in the test segment a device that offers higher frequencies, higher payloads and also vector motion."

Higher frequency provides an increased capability compared to normal simulation tables that range from 45 to 50 Hz. Steve Panter, operation manager at Exova, says that when the company does testing analysis, a lot of damage occurs within the range from 50 to 80 Hz. With a regular simulation table, results are often filtered down to 40 Hz, so any damaging events beyond that point are not captured. The hexapod system allows those events to be included in the scope of testing, and broadens the value of the testing process.

"A driving factor with running higher frequency tests is the frame of reference," says Ehmann. "Tests run on structural members of an automobile body frame, for example, typically see a low-frequency spectrum. But with engine testing, the frame of reference changes to a much higher frequency vibration spectrum. Capturing or replicating drive files from an on-engine component or engine coupling typically have a much higher frequency range. The Moog simulation table enables tests on engine components above vibration levels that were achievable with traditional orthogonal systems."

The focus on higher motion performance is a competitive advantage for testing facilities, and ultimately the end customers, as a way to deliver faster time to market and reduce costs. Increasing the frequency of the simulation table both expands the speed and the effective range of tests.

"The testing that Exova provides is related to structural testing of individual components," says Panter. "The goal is to replicate the inputs that a system or subsystem will actually see on an accelerated durability test course or in the real world. With every component mounted to the table that provides the six degrees of freedom, we put in all three-axis loads (X, Y and Z) along with pitch, yaw and roll."

Another area where the hydraulic hexapod offers a distinct advantage is the ability to handle much bigger payloads than any competing system on the market. For example, Exova had one unique requirement for a Navy application where it would normally run tests using an ED shaker, but couldn't because of the size of the part. Since the Moog simulation table is able to run in either actuator or hexapod modes, the company was able to do an exact translation, one axis at a time, running a part that weighed 3,800 lb.

"The test ran in a frequency range from 4 to 17 Hz which couldn't have been duplicated on an ED shaker because testing at less than 4 Hz ends up creating stroke limits and, with the higher frequencies, the payloads were too high," says Panter. "The design of the valves and actuators on the hexapod allows the higher frequency compared to typical testing systems. Payloads are often rated the same, but the system can never achieve the higher frequency test criteria."

Because the system uses vector motion rather than moving individual axes in a single plane, Ehmann says results are more realistic and similar to motions a component under testing would experience in the real world. In many orthogonal systems, multi-axis tests are implemented one plane at a time. The Moog system allows all of the testing to occur at once and, in some applications, the user is able to significantly reduce the amount of testing time.

While the six degree of freedom hexapod (aka Stewart platform) itself is not new, what's different now is optimization of the controls using a closed-loop test controller and different types of hydraulic valves at various flows and responses.

"The flow rates of the system have been optimized, which affect the velocity and responsiveness, along with the gains in the control loops which ultimately affect the frequencies," says Ehmann. "Performance has been fine-tuned, focusing on the payload and frequency response of the hydraulic test rig."

The biggest engineering challenge in developing the system was eliminating leakage with the hydraulic actuators. Moog was able to resolve initial rod leakage issues experienced in the development process by optimizing the smoothness of the rod, and working with seal vendors to ensure an optimal sealing arrangement.

The development of the system itself turned into an iterative process working to get the correct match between loop gains, valve flows and valve response. The process encompassed optimization of the mechanism and the real-world process of making it work effectively as a system. But the key to its performance is the expanded flexibility that it brings to the testing process.

"The ability to run the system in two different modes allows the table to do motions that are not typical of a normal MAST table without new front end controls and drivers to enhance the controls," says Panter.
0 comments
Hide comments
Related