Heard At The Battery Show 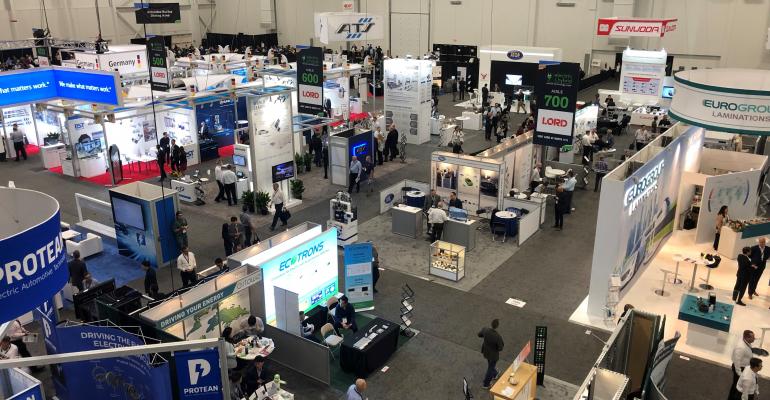 Breaking news, new ideas, and the pulse of the industry from The Battery Show in Novi, Michigan.

With more than 9,000 attendees and 700 manufacturers, The Battery Show and Electric & Hybrid Vehicle Technology Expo 2019, in Novi, Michigan has become one of the premiere venues for engineers, technologists, and industry leaders. As befitting its proximity to Detroit, the show has become the place to learn of new trends and directions, particularly in the electrification of transportation.

During the Leaders Roundtable on solid-state battery technology, Brian Sisk, vice-president of battery cell development at A123 Systems announced that the company would be building a prototype manufacturing facility at its Romulus, Michigan battery plant. The facility was originally expected to be closed and sold, however the company has now decided to use it to jump-start its solid-state battery efforts. A123 is working with Massachusetts-based Ionic Materials, whose polymer-based solid electrolyte will be used with graphite anodes and metal oxide cathodes. Sisk told Design News that the solid-state batteries can be built on commonly-used battery manufacturing equipment and that prototypes will be available for OEM testing before then end of the year.

“Biggest miss? Why do we have three standards for charging?”

“All of you are irrelevant! The market is going to decide whether EVs are going to be successful!”

“I have people tell me that they have never heard of wireless charging. Wireless gives you a more elegant solution.”

“If you take these high power packs and put them in stationary applications, you can use them to power wireless chargers.”

“Our chairman has said that we will have solid-state battery powered vehicles at the Tokyo Olympics in 2020.”

“Electric Vehicles can be an asset to the (power) grid”

“EVs have gone from being “hip” and essentially a science project to being an essential core business.”

“Retail customers may only use fast charging on longer trips—they might want a larger battery (then) so that they have to make less stops.”

The system can provide any number of 12 volt and 48 volt sources, which mean that as a vehicle platform evolves and adds new functionality, the same MODACS can provide the required power outputs. It can also charge on 48 volts and discharge on 12 volts at the same time.

Rich also highlighted the potential to bring capacitors into the system—called Capacitor Assisted Battery (CAB). He told us that “In 12 volts, power is king, while in 48 volts energy is more important.” By adding the CAB, the best of both worlds is a possibility. Rich also noted that the system is robust. “An old CAB is actually stronger than a new LFP (lithium ion) battery,” he said.

Rich told Design News that General Motors has already filed more than 20 patents on MODACS, and expects many more to be filed in the coming year. He also told us that the concept isn’t limited to 48 volts and could be used with higher voltage systems.

Long term, the concept could be huge, as it removes the inefficiencies that come from DC to DC conversions and allows power and energy to be applied where and when it is needed.

The dates for The Battery Show and Electric & Hybrid Vehicle Technology Expo 2020, in Novi, Michigan will be September 15-17, 2020.