As all-electrics gain ground, the flood of drive-train component suppliers entering the market could resemble that of the early days of the auto industry.

I was put in mind of electric cars recently during my preparation for Design News' upcoming National Instruments Webcast on alternative energy. My guest, Brian MacCleery, closed our prep call by remarking that he'd just driven his new Nissan Leaf home from the dealer the evening before.

That set off the usual cascade of range-anxiety trepidation, which electrics provokes in New Yorkers like myself: Where would you park it? How do you keep it charged? Who will rescue you when you run out of juice on the Long Island Expressway? 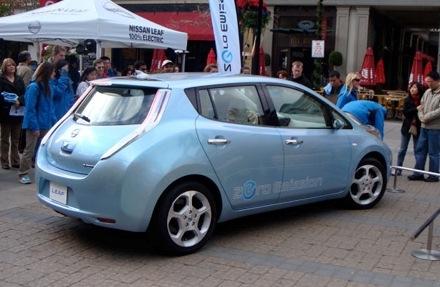 Brian has no such worries. He lives in Austin, Texas, which is beginning to install the infrastructure required to support plug-in, all-electric vehicles. As the Austin Statesman has reported, Austin is one of nine regions to be designated a pilot area for charging stations. Coulomb Technologies of Campbell, Calif., has received a $15 million federal stimulus grant to install charging stations in Austin and the other areas. (Apparently there is indeed one in New York City, near the Port Authority.) Better yet, the Austin City Council is going to offer residents unlimited charges at the stations for six months for $25.

OK, maybe I'm overstating the comparative state of infrastructure in Austin versus New York. The salient point is that the former city is more amenable to the short commuter jaunts for which all-electrics are ideal. My thesis is that the build-out of charging stations will spotlight a daily driving cost advantage that's not even funny: $50/year for unlimited mileage versus $4/gallon.

That, in turn, will entice consumers and advance plug-ins beyond the hippy dippy early adopter demographic, turning it into a steadily growing market niche. Which leads to my next, and more important, engineering-oriented question: Who will design and supply the drive trains for the next generation of electrics? It's a certainty that, as more manufacturers enter the arena, an ecosystem of component vendors will spring up.

There's already a near-panic among existing suppliers that they have to board the electric bandwagon. Nikkei Monozuki quotes the chairman of Japan's NTN Corp., a $6 billion annual revenue maker of hub-bearings and CV joints, as saying he's very apprehensive about electrics. The upshot is NTN has been rushing to develop in-wheel, electric-motor drive assemblies. "If we don't start developing products now, it'll be too late," NTN chairman Yasunobu Suzuki told the publication.

Ditto in Detroit, which has showed clear signs of a manufacturing reemergence. But the US industry has to go whole hog into electrics to survive the automotive platform transition presaged by cars like the all-electric Leaf and Mitsubishi MiEV and the engine-for-charging equipped Chevy Volt.

My question -- and please enter your comments below -- is, how far along is the engineering community here? I see this as an exciting engineering opportunity for Design News readers. One perhaps odd way to look at it is that the 80kW-class motors driving electric cars are kind of a macro (very macro) version of the MCU-plus-servo-motors we see in embedded.

On the other hand, perhaps I'm putting the cart before the electric car. Maybe the natural business evolution won't see a series of many suppliers surrounding a few manufacturers. When you think about it, that's a PC-industry paradigm, where the suppliers "own" the technology and the platform makers simply bolt everything together.

With electrics, the motors and control electronics are the proprietary pieces one needs to own to protect one's market position. So perhaps the arena will shape up more like the early auto days, where REOs and Stanley Steamers competed alongside Ransom Olds and Henry Ford's new horseless carriages. We're already seeing some of that with a flood of Yugo-like electrics such as the Think City and the Smart Fortwo ED.

Whatever happens, it looks as if we're near a tipping point, where even consumers' lingering reluctance can't hold back the imperative of history -- which means that good engineering needs to lead the way to a successful electric future.