NASA is funding technology that would use robotics and 3D printing to construct parts of very large spacecraft and other structures in space. Doing this could reduce the cost and risk of building and launching systems and allow for bigger structures.

NASA is funding technology that would use robotics and 3D printing to construct parts of very large spacecraft and other structures in space. Doing this in space (instead of on the ground) could reduce the cost and risk of building systems and then launching them into orbit, and it could allow these structures to be bigger than is now possible.

Click the image below for a slideshow on the SpiderFab project. 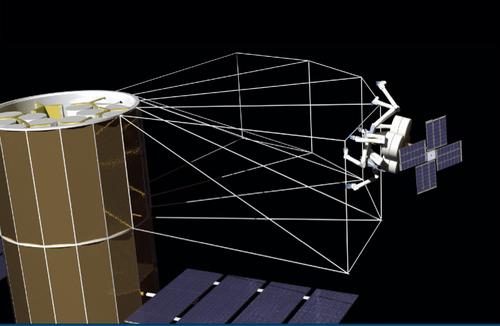 Tethers Unlimited, the company leading this project, says it will enable the manufacturing of large components of kilometer-scale systems, include parabolic reflectors, phased array antennas, optical mirrors, solar panels, and trusses. Robert Hoyt, CEO of Tethers Unlimited, said in a post on NASA's website that the goal is to improve packing efficiency and system mass, so NASA can use smaller, cheaper launch vehicles to carry pieces for systems that would be too large to build and ship using today's methods.

SpiderFab will combine robotic assembly and extrusion-based 3D printing techniques adapted to operate in microgravity. The technologies invented or adapted by Tethers Unlimited for this project include an inside-out 3D printer that operates in space with an unlimited build volume. Its precision print head extrudes carbon fiber/PEEK composite material, such as the carbon composites already used in aircraft and satellites like the Juno spacecraft headed for Jupiter. (See: {doclink 244386}.)

Automated layup of the composites was tested in the company's Trusselator, a mechanism being developed under a parallel, Phase I NASA Small Business Innovation Research project. Tethers Unlimited said in a press release that the Trusselator will use SpiderFab's combination of 3D printing and robotic assembly to construct long truss structures in space to serve as platforms for solar arrays and other space systems.

Then there's the Kraken, a very compact, seven-degrees-of-freedom robotic arm with a reach of 1 m. The arm is designed for precise alignments and was developed not only for SpiderFab, but also to allow nanosatellites to perform satellite servicing and debris capture tasks.

SpiderFab itself consists of several Kraken arms and a spinneret mechanism that extrudes structural elements of varying lengths fed by material source spools. It will be aided by a 3D vision system, precision tools, and metrology and other software.