HomeIndustryGovernment/DefenseSlideshow: Helicopter Drones Are Everywhere
Recent
Industry
Using Low-Code/No-Code Systems for Manufacturing Quality
May 19, 2022
Los Angeles Fire Department Deploys Nation’s First Electric Fire Truck
May 19, 2022
Supplier News Looks at an Automated Coolant Management System
May 19, 2022
Is Magneto the Hero We Need to Destroy Blood Clots?
May 19, 2022
POLL
Using AI To Help the Deaf Communicate
May 19, 2022
Argo AI Expands Driverless Operation to Austin and Miami in Search of More Challenges
May 18, 2022
12 Ideas that Could Change the World
May 18, 2022
Making the AC Power Main Intelligent
May 18, 2022

In recent years there has been a proliferation of helicopter drones.

In recent years there has been a proliferation of helicopter drones. Some are small enough to fit in your palm, while others are “roadable,” large enough drive along roads as well as fly. The roadable drones were designed to retrieve soldiers wounded in battle. The tiny robots were designed for military surveillance.

Many new copter drones were designed for neighborhood use, primarily as flying cameras for those in real estate. The film industry has also turned to drones as a cheaper way to take aerial shots. Search and rescue services -- whether police or ambulance -- are using drones to photograph crime scenes or locate those in an emergency situation.

Click the image below to see our collection of drones. 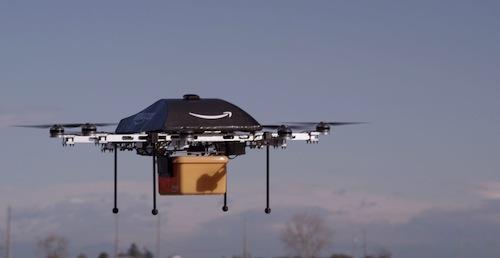 The goal of Amazon’s helicopter delivery system is to get packages into customers' hands in 30 minutes or less using unmanned aerial vehicles. Putting Prime Air into commercial use will take some number of years as we advance the technology and wait for the necessary FAA rules and regulations.
(Source: Amazon)