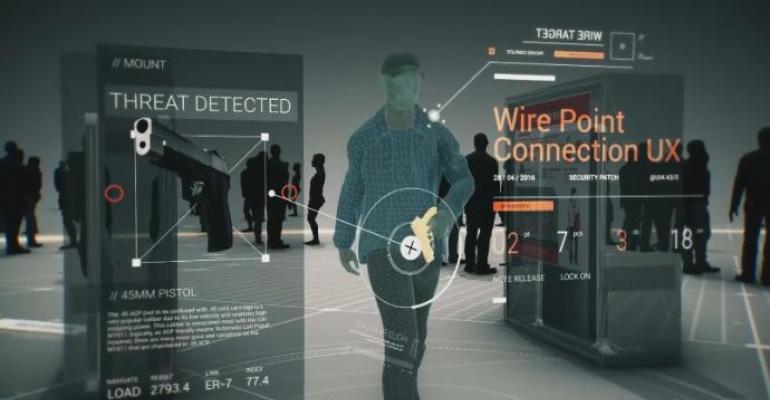 Hexwave is an AI-enabled radar solution to combat the growing threat of ghost guns and 3D-printed guns.

On the day of his 16th birthday, Nathaniel Berhow, a student at Saugus High School in Santa Clarita, Calif., shot and killed two of his classmates and wounded three others. The tragedy mirrored so many others that have been happening all over the US at an alarming rate in recent years. But one particular detail of the .45 caliber handgun Berhow used in the shooting caught the attention of law enforcement and media.

The gun was a “ghost gun,”so-called because it contained no serial number – making it difficult, if not impossible, to be traced by law enforcement. Ghost gun parts can even come from multiple sources further muddying the the chain of custody for law enforcement.

The gun was assembled from a kit of parts purchased online. Sellers of such kits argue that since they are only selling gun component rather than fully assembled firearms, they are legally in the clear.
Ghost guns can even be assembled using 3D-printed parts, printed by a seller or by the buyer in their own home. Files to print gun parts are readily available on the Internet and their legality is the subject of an ongoing legislative debate.

The modular nature of these guns, as well as their plastic components, also means it can be easy to sneak them past metal detectors.

The Saugus High School shooting was only the latest in a series of increasingly high-profile incidents involving ghost guns. But while law enforcement and government agencies are grappling with legislating and tracing ghost guns and 3D-printed guns, other groups and companies are working on the ground level to develop technologies to make these firearms easier to detect.

One such company is Atlanta, Georgia-based Liberty Defense. Liberty Defense has developed a technology it calls Hexwave, licensed from MIT's Lincoln Lab, that combines machine learning and computer vision with an array of radar antennas to detect weapons regardless of their material composition. The goal is to augment existing security systems in airports, malls, stadiums, and other public spaces with a mobile system capable of detecting not only concealed weapons, but bullets, magazines, explosives, and even larger weapon components as well.

Bill Riker, CEO of Liberty Defense, told Design News that Hexwave is aimed at detecting weapons and other articles in dynamic, urban environments – places more chaotic and unpredictable than the queues at airports.

“In the airports and other places, it's a very rigorous and effective process, but it takes a long time. And you've got a very captured audience,” Riker said. “In the urban environment – schools, stadiums, and malls – you've got a much less controlled environment, but you have an equally growing need for security.”

Riker said Liberty Defense's technology allows for both indoor and outdoor detection zones, which is “important because of the need to be able to accommodate a layered defense when you are really trying to buy time for a security operation to proactively prevent a weapon from coming into a facility.” Hexwave can also be deployed covertly via kiosks or other means such as being hidden in walls.

Riker, who has over 35 years of experience working in security systems with Smiths Detention, DRS Technologies, General Dynamics, and the U.S. Department of Defense, likens Hexwave's sensor technology to an insect's eye – where a number of eyelets function together as one unit. Here, instead of eyelets, an array of low-frequency radar antennas (200 times lower power than Wi-Fi, according to the company) creates a three-dimensional point cloud of a person – capturing over 400,000 data points, according to Liberty Defense. “Think about it like a child's coloring book. You're connecting all the dots, except it's in three dimensions,” Riker said.

“Part of the great work that MIT did here was to craft a design that can create multiple transmit and receive antennas,” Riker explained. “Typically, an antenna array has its transmitting and receiving off the same dish. This array actually separates them and you're able to have essentially a multistatic display configured into a monostatic display.”

That point cloud is then converted into an image that a deep learning neural network analyzes to look for weapons and suspicious objects – all done in real time.

“We teach [the AI] a whole different series of weapons and as new weapons occur, we teach it and then we send that out by Wi-Fi into all the different systems to update them on a regular basis,” Riker said. “What's important here is you don't have to go from the cloud to a lookup table. All the analysis is done on the unit, therefore it's super fast.”

Rather than distinguishing specific models or types of guns, what Hexwave looks for is identifiable shapes. “At this point, it's general, but we can tell the difference between a plastic handgun and a metal metal handgun,” Riker said. “You can see if it's a revolver or if it's a semiautomatic pistol. You can also see explosives, including pyrotechnics. In that case you can actually you see the accelerates within the container.”

He continued. “There are all kinds of high-strength polymers that you can build 3D-printed guns out of. We can see that because it's got a physical form to it, meaning, regardless of the material, there's going to be some degree of reflectivity there. And so when you're emitting energy against it that's going to have a return that gives you that three-dimensional look.”

Once the AI has made its analysis, it can notify a human guard using a tablet. Riker said Hexwave can also be implemented into security systems to control things like door lock systems, video management systems, and command and control in cases where an immediate response is needed.

Liberty Defense says about 1,000 people can pass through a Hexwave-enabled security post. But there are limitations in terms of queuing people through the system. Entrance ways in typical stores, malls, and even schools can be chaotic – with lots of people entering and existing simultaneously in clusters. Hexwave requires each person be scanned one and a time – which means single file lines.

“The radar or the the energy we're using is non-ionizing. So we're out of the x-ray side, past millimeter wave, and into a different area,” Riker said. “And so what ends up occurring here is you can't see through people. But, quite frankly, you can't see through multiple people with x-ray systems either.”

Riker said the Hexwave system does offer an increased throughput over typical security stations and metal detectors – as well as more accuracy for security personnel – that Liberty Defense believes will ease any burden by requiring people to line up.

“So you get your increased throughput from two things really: Number one, you're passing through at a walking pace and you typically should not have to divest of your typical articles on your body like a cell phone, a set of keys, or something like that. And then that's also when it does identify something that's either a known threat, clearly not a threat, or as an anomaly.

“Let's say there's an odd shaped object on you that's really big that may look like a bar of soap. Why are you carrying a bar of soap on you? That's kind of an odd thing to have, so the system will say something's wrong here. It's an anomaly. But the system also shows where that object is on your body so that a security official can go ahead and say, 'Okay, please step over here for a second; what is that in your back pocket?' ”

The real time speed of the system also offers an advantage over systems such as what the public may be used to in airports, for example.

“The airports do a great job. The technology is very effective. Airport scanners or the body scanners are typically using a four-millimeter wave and they are creating an image. It's just that it's not in real time. The reason why you can't have little kids go through it is not because of the emission level. It's because the kids typically can't stay still. If you move ,you blur the image.

“For our system, it's capturing the images several times a second. Little kids, adults, everyone can just keep walking through,” Riker said.

This anomaly detection feature becomes particularly important as criminals will often find ways around any new security system given enough time and experience. Different facilities can instruct the system to flag certain large items that shouldn't be carried in (think large bags at sports stadiums) and human guards can intervene if something like a radar jammer or scrambler causes interference in the system. “If you've got a handgun or something like that in a radar-proof bag, it's going to see a big bag on your body, flag the anomaly, and trigger the subsequent inspection,” Riker said.

In April 2019, Liberty Defense was granted an experimental license by the FCC to begin testing Hexwave. The company is planning to roll out beta tests in first half of 2020. As of writing 11 site have agreed to participate including Rogers Arena in Vancouver, the University of Wisconsin, and the Virginia state capital building in Richmond, VA. Utah Attorney General Sean Reyes has committed to testing Hexwave in his state. And the Maryland Stadium Authority will be testing the technology in various sporting venues.

However, the Giffords Law Center to Prevent Gun Violence cautions: “The Undetectable Firearms Act does not specify what portion of the firearm must be detectable by a metal detector. This could allow an individual to create a mostly plastic but technically compliant firearm, using a 3D printer or other technology, that contains metal in an extraneous part of the firearm that could be removed prior to entering a security area.”

Riker said Liberty Defense is hoping to provide the public with a degree of safety and peace of mind that legislation hasn't been able to. “That peace of mind seems to be eroding right now. So there's a great potential to help recover that in our society,” he said. “I think we're pretty confident that we'll be able to stay ahead of the threat curve”