HomeIndustryGovernment/DefenseIs It a UAV? A Submersible Robot? It's Both!
Recent
Industry
Using Low-Code/No-Code Systems for Manufacturing Quality
May 19, 2022
Los Angeles Fire Department Deploys Nation’s First Electric Fire Truck
May 19, 2022
Supplier News Looks at an Automated Coolant Management System
May 19, 2022
Is Magneto the Hero We Need to Destroy Blood Clots?
May 19, 2022
POLL
Using AI To Help the Deaf Communicate
May 19, 2022
Argo AI Expands Driverless Operation to Austin and Miami in Search of More Challenges
May 18, 2022
12 Ideas that Could Change the World
May 18, 2022
Making the AC Power Main Intelligent
May 18, 2022

Is It a UAV? A Submersible Robot? It's Both!

A multi-talented new type of robot can be launched from underwater and fly into the air. It's lightweight, relatively low cost, and has a structure that's 3D printed from plastics, not metal.

The unmanned aerial vehicle (UAV) can also perform as a submersible, also known as unmanned underwater vehicles (UUVs) or autonomous underwater vehicles (AUVs). Engineers at Johns Hopkins University's Applied Physics Laboratory (APL) who designed the bot clearly have a sense of humor. They dubbed it CRACUNS (corrosion resistant aerial covert unmanned nautical system), presumably a reference to the Kraken in Jules Verne's 20,000 Leagues Under the Sea.

In this video, Jason Stipes, project manager for CRACUNS at APL's Sea Control Mission Area, says, "APL engineers have long worked on both Navy submarine systems and autonomous unmanned vehicles. In response to sponsor challenges, we were inspired to develop a vehicle that would operate both underwater and in the air." The CRACUNS can be sent on a wide array of possible missions because it can operate in the harsh environment of the shore, and because of its payload flexibility. This combination gives it new capabilities that weren't possible for either UAVs or UUVs.

One of the most significant differences from these robot types is the fact that the CRACUNS has no structural metal parts or machined surfaces, and it can be submersed at several hundred feet under water as well as launched from those depths into the air. Two APL teams worked together to build it, one from the Force Projection Sector and one made up of fabrication experts in the Research and Exploratory Development Department. Using additive manufacturing, they created a lightweight, submersible airframe made of composites that can withstand the water pressure at those depths. They also sealed the most sensitive components in a dry pressure vessel to protect them from corrosive saltwater. Parts that must be exposed, like the motors, were coated with commercially available protective coatings, then submerged for two months while continuing to operate with no sign of corrosion. 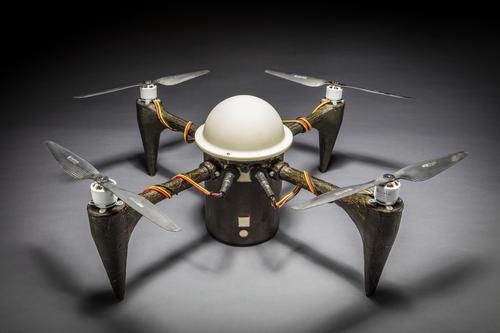 Closeup of the CRACUNS (corrosion resistant aerial covert unmanned nautical system) from Johns Hopkins University's Applied Physics Laboratory. Its most sensitive components were sealed in a dry pressure vessel to protect them from corrosive saltwater. Parts that must be exposed, like motors, were coated with commercially available protective coatings.
(Source: Johns Hopkins University Applied Physics Laboratory)

The CRACUNS is a bit reminiscent of the Volant, Sandia National Laboratories' version of a Transformer robot. But the Volant, still in the concept stage, also operates on land in addition to water and air, and it has to transform itself into different configurations for each of those environments. So far, Sandia's Intelligent Systems, Robotics, & Cybernetics (ISRC) group has already built some conceptual hardware and has conducted limited testing, but it's nowhere near the functional stage of the CRACUNS prototype.

Although Stipes mentions the project had a sponsor but not who it was, the APL's website says, "Our scientists, engineers, and analysts serve as trusted advisors and technical experts to the government," and "we provide solutions to national security and scientific challenges." The lab does a little independent R&D, but its more than 600 programs have sponsors primarily from the Department of Defense, Department of Homeland Security, NASA, and the NSA.