A nonprofit organization that promotes interest in STEM among girls is calling for applications for annual summer technology learning programs that have expanded to 11 cities.

A nonprofit organization that promotes interest in STEM among girls is calling for applications for annual summer technology learning programs that have expanded to 11 cities and garnered fresh funding, including $500,000 from the Knight Foundation.

Girls Who Code, established in New York in 2012, sponsors seven-week immersion programs across the country that offer girls in the 11th and 12th grades more than 300 hours of intensive instruction in Web development and design, robotics, and mobile development with mentorship, as well as exposure to top female engineers and entrepreneurs. 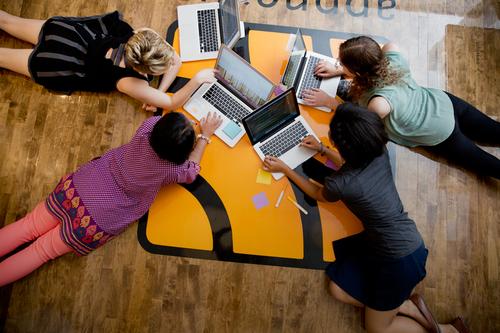 Girls participating in the Girls Who Code summer immersion program, which provides women in grades 11 and 12 with more than 300 hours of intensive instruction in Web development and design, robotics, and mobile development with mentorship, as well as exposure to top female engineers and entrepreneurs. The organization has expanded its program to 11 cities this summer and is accepting applications.
(Source: Girls Who Code)

The organization is the brainchild of Girls Who Code Founder and CEO Reshma Saujani, who was inspired by the disparity between the way boys and girls approached technology education during visits to schools in New York. She decided it would be her mission to help girls have the access and empowerment they need to rise above the ranks in the tech sector.

[Network and collaborate with your peers at Pacific Design & Manufacturing, Feb. 9-11, at the Anaheim Convention Center.]

The new funding builds on previous Knight support to the nonprofit, unveiled in January 2013, to help launch the Girls Who Code immersion programs in Detroit; San Jose, Calif.; and Miami. The additional support for Miami is to support the emerging community of engineers there and to foster community benefits such as the expansion of economic opportunities and retention of talent, said Matt Haggman, Knight Foundation program director for Miami.

"Programs such as Girls Who Code are essential to these goals and making Miami more of a place where ideas are built,” he said. “The program is helping to broaden and bring more diversity to the number of young entrepreneurs who can help make their city great and contribute to its future.”

Indeed, the STEM field still sees a major gender gap between men and women in terms of those entering the field, particularly in the technology sector, according to Girls Who Code. Estimates predict 1.4 million jobs in computing-related fields by 2020, with women educated in the United States on track to have only 3% of them, according to the organization.

The Knight Foundation is not the only one supporting the organization in its endeavor to change this statistic. Girls Who Code’s 2016 summer programs boast 42 partners that span technology, telecommunications, finance, animation, fashion, gaming, and other sectors. The organization continues to add partners each year to promote its cause, a spokesperson said.

Elizabeth Montalbano is a freelance writer who has written about technology and culture for more than 15 years. She has lived and worked as a professional journalist in Phoenix, San Francisco, and New York City. In her free time she enjoys surfing, traveling, music, yog,a and cooking. She currently resides in a village on the southwest coast of Portugal.