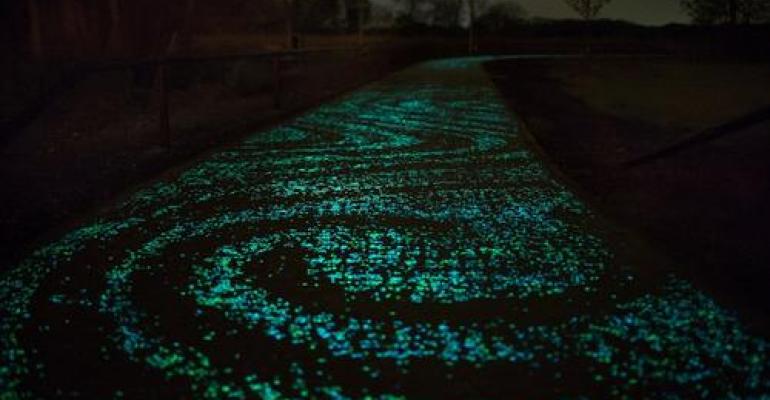 The Dutch are known for their love of bicycling, and they've also long been early adopters of green-energy and smart-city technologies. So it seems fitting that a town in which painter Vincent van Gogh once lived has given him a very Dutch-like tribute -- a bike path lit by a special smart paint in the style of the artist's "Starry Night" painting.

Designed by artist Daan Roosegaarde of Studio Roosegaarde, the van Gogh-Roosegaarde bike path -- in the Dutch town of Nuenen en Eindhoven, where van Gogh lived from 1883-1885 -- is a kilometer long and features technologies developed as part of the Smart Highway project, a joint venture of the studio and Dutch infrastructure company Heijmans. 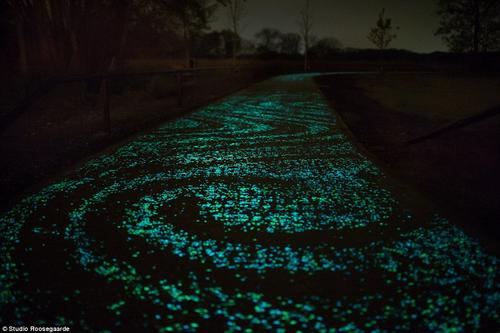 The idea for the path was born when the city of Nuenen en Eindhoven and the van Gogh foundation asked Roosegaarde to create landscape art that would help reignite the cultural heritage of his relationship to the city.

A team of 12 designers and engineers worked on the project for eight months, while site production took 10 days. The opening of the path marked the official launch of the international van Gogh 2015 year.

The path uses stones painted with a smart coating that charges by the heat of the sun during the day and then glow at night for up to eight hours. When there is not enough sunlight during the day to charge the stones, the path can draw electricity from a solar panel installed nearby. There are also LEDs in the path that provides lighting.

The stones were placed in patterns modeled after "Starry Night" while the black concrete of the path was still wet, and then brushed and polished to make a smooth surface for cycling.

Roosegaarde was inspired by the cultural history of van Gogh to use the painting as inspiration for the path, but at the same time he wanted to connect the past with the future "to make energy-neutral and poetic landscapes," he said. Being van Gogh's most iconic work, a modern interpretation of "Starry Night" using smart materials could provide that link the past and the future, Roosegaarde said.

The van Gogh-Roosegaarde path -- the first kilometer of a longer path from Nuenen to Eindhoven -- glows with the dreamy effect of the night sky, very similar to Van Gogh's painting.

This video shows the van Gogh-Roosegaarde bike path by night: