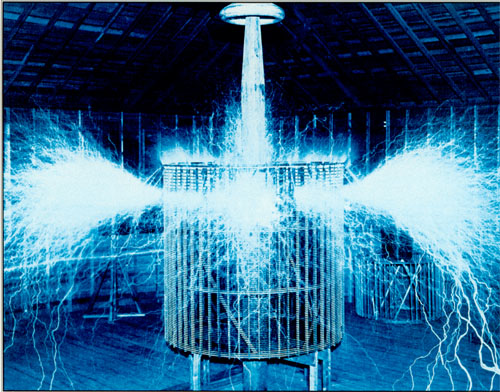 I used to work at a large PC manufacturer located in northwest Houston.  Every year the company would sponsor a Fall Festival on the company premises, including dedicating an entire floor of the parking garage for a Haunted House.  They went all out, including having the facilities guys frame it with 2×4s, sheetrock, and paint it.  The PC industry used to be like that (for example, one of the yearly company meetings was held in the Summit, and had Kenny Loggins as a musical guest).

Different groups within the company would sponsor rooms in the Haunted House.  My group traditionally built a Tesla coil, but not your typical desktop coil.  Our coil started, innocently enough, with a Variac to step down the line voltage somewhat.  The output of the variac was connected to the primary of a 30 kV pole pig line transformer.  The pole pig output was in turn connected to the primary of the Tesla coil, which consisted of relatively heavy 1″ copper strip, wound on end in a flat spiral.  The secondary of the Tesla coil was wound on a 16″ diameter cardboard tube, about 4′ tall.  It would throw an arc several feet to the roof of the garage.

The spark gap alone qualified as a high voltage entertainment device.  It was a Lexan wheel attached to a motor.  The wheel had a dozen or so  metal rods inserted through the Lexan, evenly spaced around the perimeter.  There were stationary contacts on the base of the assembly, one on each side of the wheel, such that as the wheel turned and the metal rods passed the stationary contacts arcs would cross the space from the contact to the rod and from the rod to the contact on the other side.  When in operation the wheel appeared to be a ring of fire.

For the Haunted House we built a large room with a 4×8 Plexiglass window to the hallway.  The room itself was unlit so you couldn’t see the coil, or the grounded chicken wire mesh on the other side of the window.  When a good sized group of people collected at the window, trying to peer in to see what was in the dark room beyond, the operator would close the connection on the primary and the Tesla coil would arc to the chicken wire just inches away from the spectators, filling the whole window with sparks.

I got to thinking about that after seeing a Tesla coil project on Instructables.  There are quite a few but this is one of the better ones, as it includes an actual schematic instead of a bunch of blurry close-up photos.  For this project the total BOM was about $25, but I don’t think that includes the neon sign transformer used to provide the initial high voltage.  The project uses copper tubing, PVC pipe, and high voltage capacitors made out of glass juice bottles.

The Tesla coil is of course named after Nikola Tesla, an extravagant, brilliant, and eccentric inventor of the late 19th and early 20th centuries.  There is plenty of biographical material about him on the Internet, but if you want to learn more about him I would recommend the autobiographical articles he wrote about himself and his inventions in the magazine Electrical Experimenter, collectively titled My Inventions.