Star Trek door for your house 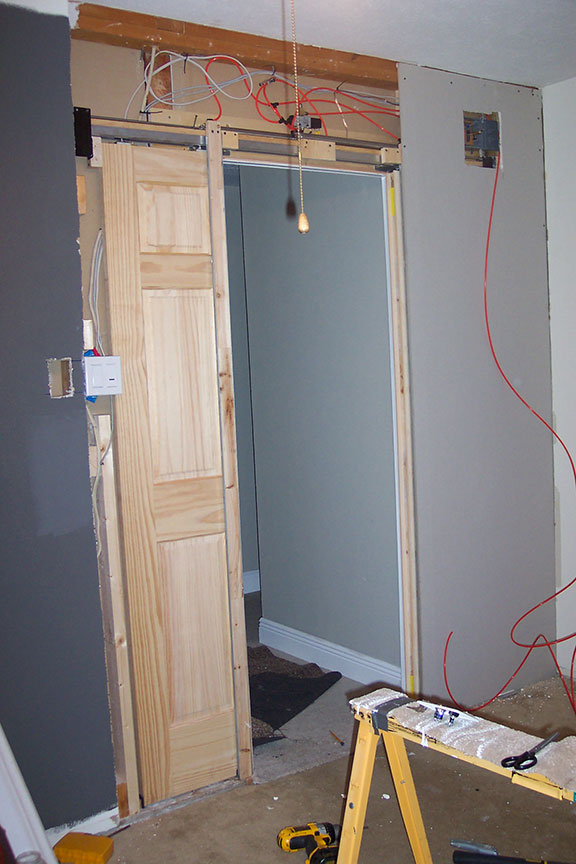 I recently ran across Marc DeVidts blog, in which he describes how he built Star Trek style automatic sliding doors for his bedroom.  The house was being remodeled after Hurricane Katrina, so presented a golden opportunity for the self professed Star Trek: The Next Generation fan.

After tearing open the wall, Marc bought a solid oak door and cut it in half with a circular saw.   It hangs from a pocket door track and trolley, with a custom bracket that connects to the shaft of a 16″ pneumatic valve.  The doors are operated with compressed air, supplied by a small compressor in the attic above the room.  A motor with linear actuator would have been simpler but then you wouldn’t have that classic “whooosh” as the door opens and closes.

Some electronics, powered by a PIC processor, interface to a keypad and lock allowing you to operate the door, and lock it in the open or closed positions.

A motion detector would be a neat addition, although false triggering could be a problem, especially it its application as a bedroom door.  I have a recollection of an “Airplane!” type movie set in space where the pneumatic doors would only open when an actor said “Shhhhh!” to them.  No idea what movie that was, if you remember it maybe you can post the name in the comments.

Marc Devits is a clever guy,  also on his blog is an iPhone controlled LED suit that he built and wore to DragonCon.  Check it out.