Fifty-six-year-old Pasquale Russo has been doing metalwork for more than 30 years in a tiny southern Italy village. Many craftsmen like him brought with them fabrication skills when they came from the Old World to America.

Labor Day in the US and Canada is Sept. 7 and a time to celebrate workers and the skills and ingenuity they bring to their work — attributes that make North American industries among the world’s most productive.

Although modern factories, decked out with high-tech machinery, automation, and connectivity, are significantly different from those of even a generation ago, manufacturers still need people with innate mechanical skills who work well with their hands and have problem-solving aptitude and creativity. In this respect, the manufacturing workers of today share a bond with those of bygone eras. The technologies of manufacturing change, but the basics stay the same when it comes to human ability.

Many manufacturing skills were brought to North America or improved upon by generations of immigrants, especially those from Europe. People with know-how with tools, familiarity with mechanical systems, and intuitive understanding of what works in fabrication contributed to the formalization of manufacturing workplace knowledge and practices from which current ones evolved.

Images of craftsmen applying hands-on skills in shops and factories were ubiquitous in North America for years. While economies of scale and technology transformed this activity in most 21st-century workplaces, this wasn’t always the case in other parts of the world. During a trip to Calabria, in southern Italy, an area from which many embarked for North America, I spent time with a craftsman whose one-man metalworking shop is reminiscent of an earlier time in manufacturing.

Pasquale Russo, 56, has been doing metalwork for more than 30 years. His small shop (645 sq ft) is on a passageway near one of the piazzas in the tiny village of Aiello.

Russo’s operation has old machines, tools and clamps, an anvil (of course), and two furnaces he built by hand.

Russo acknowledges his skill in metal but sees himself differently. “I invent designs. That is the most important part of my job, and the most difficult,” he said. “Once a design is created, making it is not hard.”

Nor, he adds, is anything too complicated to fabricate. “It’s difficult coming up with designs,” he said, but once he does, “I can make anything.”

A turning point in his career came years ago, when he worked in Milan. He met an artist who grew up in Aiello, as well. The artist’s ability to create paintings and other works from ideas impressed him, so he set out to do the same in metal. The result has been a steady local business in which he blends form and function with style and sometimes whimsy in his creations.

Russo is self-taught, and it helps that when it comes to fabricating in metal, “I see how to do things that other people have to go to school and study.”

Following are photos of Russo’s operation. He is a poignant reminder on Labor Day of the role craftsmen played in the development of manufacturing.

Click on the photo below to begin the slideshow. 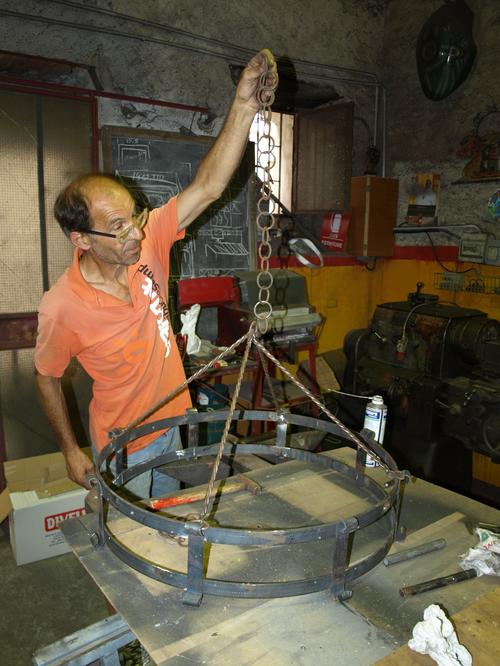 One recent project Russo designed and fabricated was a chandelier. Shown here is the initial assembly prior to finishing. (Source: Pat Toensmeier)