HomeIndustryMaker/Gadget FreakHow to Make Your Own Apple Watch, a Retro One That Is
Recent
Industry
Will I See You at the Virtual 2022 RT-Thread IoT OS Global Tech Conference?
May 27, 2022
Novel Silk-Protein Eyed for Tendon Repair
May 27, 2022
NTT Data Powers Indy 500 Predictive Analytics
May 27, 2022
At NI Connect: More Companies Discuss Benefits of Test
May 27, 2022
POLL
Supplier News is Checking Out Programmable Automation Controllers
May 27, 2022
What's the Latest in Additive Manufacturing?
May 26, 2022
Top Gun: Maverick Roars into Theaters
May 26, 2022
New 3D Printing Technique Prints Glass for Microstructures
May 26, 2022

How to Make Your Own Apple Watch, a Retro One That Is

It won't be long before you'll start seeing the first early adopters of the Apple Watch roaming the streets, which means now's the perfect time to show up that guy with the $10,000 Apple Watch with your own version -- a homemade Apple II Watch. 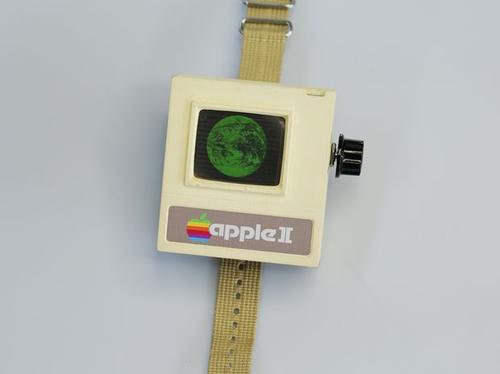 Instructables user Aleator777 has shared plans for building a working watch crafted after the classic Apple II computer, complete with tiny disk drives and an 80s-style UI -- because really, is there anything more 1980s than a computer watch?

When I set out to design the Apple II watch, I originally planned to create a faithful tiny replica of the classic machine in a wrist-sized form factor. While researching the design I began to ask if I really just wanted to make a miniature, or something altogether new? I settled on the latter. The design would be a working* device, heavily inspired by the form factor of the full size computer, but it would also be an imaginative exploration of a wearable tech world that began long before we had the technology to do so in a meaningful way.

MORE FROM DESIGN NEWS: It's Time for the Apple Watch Teardown

It won't actually sync with your iPhone, check email, or track your fitness but it does keep the date and time and it will definitely let you know who the biggest geeks in any room are when they ask you about it.

Head over to Instructables for the full parts list and build instructions.