When I converted my holiday lights from incandescent mini-lights to LEDs, my wife and daughter did not want them in the house. That was a surprise. They're both visual people, and I thought they would like the vivid colors of the LEDs. At first, they did, but soon they complained the flickering LEDs gave them headaches. Eventually, I noticed the flicker and knew the cause: 60Hz line power. Even if you cannot see the flicker, your eyes might detect it -- with ill effect.

By rectifying the AC line power with a full-wave bridge rectifier and using its output to power the strings, I eliminated the flicker.

This simple gadget comprises an off-the-shelf bridge rectifier that converts the 120V AC line current that swings between positive and negative voltages to pulsating direct current for the LEDs. Most LED strings used for holiday or festivity lighting work with the rectified current. The DC power produces a brighter light without any discernible flicker.

You may connect other LED strings to the end of the first string, but don't exceed the current rating of the bridge rectifier. The one listed in the bill of materials has a four-ampere forward-current limit. A string of 50 LEDs dissipates about 4W of energy, which converts to a current of 30-40mA. So you can connect many strings, one after the other.

I have made many of these flicker-eliminating gadgets with various wire lengths wrapped with colored tape appropriate for a given occasion. I use them indoors and outside on circuits protected by a ground-fault interrupter. 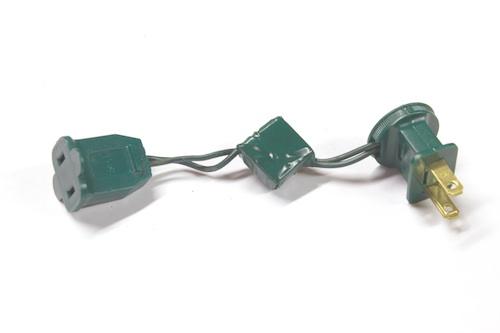 One you plug the gadget into a wall outlet, you can plug your LED string into the female receptacle.

Do you have a Gadget Freak project you would like the world to see? Send a brief description of your gadget and a photo to Senior Editor Rob Spiegel.