This DIY Lightsaber Cuts Through Metal 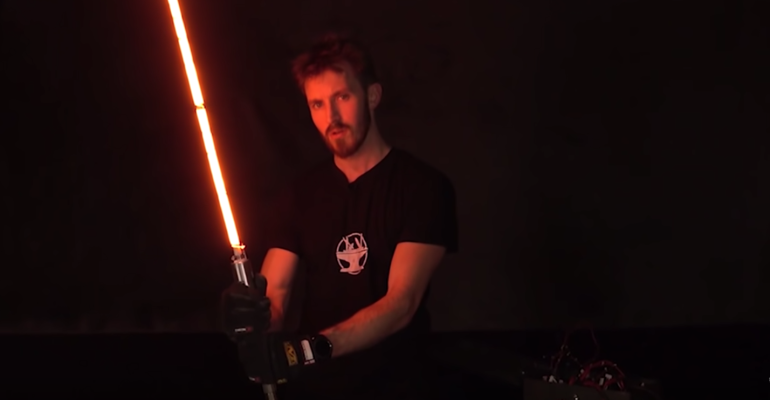 On their show, Make it Real, the team from the Hacksmith YouTube channel documented how they created a working lightsaber prototype.

It's battery-powered, made of tungsten and titanium, and it's the next-best thing to your favorite “elegant weapon for a more civilized age.”

However you feel about how the new Star Wars trilogy ultimately turned out, one thing fans can all agree one is how undeniably cool the lightsaber is. And while science tells us building an actual lightsaber is impossible, that hasn't stopped inventors and hobbyists all over the world from trying.

Sure, there are some great replicas available to fans and cosplayers. There are even lightsaber dueling competitions and an entire internet subculture devoted to treating lightsaber dueling as a real martial art with tutorials and instructional videos designed to enhance your saber skills.

But let's be honest. Nothing would compete with the real thing.

After a year of development (and thousands of dollars of investment) a group of hobbysts from the YouTube channel, Hacksmith have come as close as anyone ever has to creating a real, working lightsaber. The battery-operated saber features a heated blade made of titanium and tungsten and is capable of cutting through solid objects, even a metal pipe.

For daring makers out there, the people at Hacksmith have even made the CAD files for their lightsaber project available to subscribers of their channel.

The first challenge the team took on was designing the blade. That meant finding a material that could hold a charge long and well enough to get hot enough to cut. After some suggestions from their fans, Hacksmith first tried titanium, but found that the metal gets too soft when heated, making for a flimsy blade.

They next tried tungsten, which worked great in terms of its high melting point, but also oxidized as it heated.

The solution they settled upon was to combine the best of both worlds – a titanium pipe with tungsten core wrapped in ceramic insulation.

The bigger challenge was the power source. After all, there's no point to a lightsaber that isn't portable. The Hacksmith team settled on a battery pack containing an array of lithium-ion cells in parallel. In total the battery pack puts out over 20 kW of power, which is about half of all of the power that goes into an average North American home.

Next, they needed a switch to turn the lightsaber on. The final lightsaber build build draws 24V at about 1000 amps (24kW), meaning they couldn't use a regular switch for it. Their first attempt used a MOSFET, but the Hacksmith team found it was too much power for it to handle. Eventually they settled on using an old-fashion contactor.

The battery pack isn't the lightest (weighing about 41 lbs), but it does get the job done. Within 15 seconds of being turned on, the lightsaber heats to to an orange-white glow and reaches a temperature of over 2500ºF.

Going forward the Hacksmith team said they will continue to improve on the design of their lightsaber. Their next step is building a second lightsaber so they can try having a real lightsaber duel with the weapons. (We just hope they wear more safety gear when they try this!)

The full schematics for the current lightsaber build are available on DigiKey: