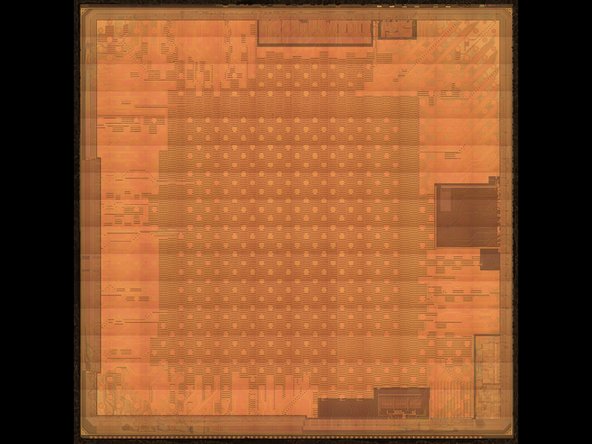 Teardowns of Apple products are all over the place, but over at iFixit they tore into the A4 — the System-on-Chip that powers the iPad and the new iPhone 4.

iFixit is “fixing the world, one piece of hardware at a time”.  It is an online repair guide, the “free repair guide that you can edit”.  It began life as a place that offered instructions and parts for replacing the batteries in Apple handheld products, and has evolved into staff and user contributed repair guides that cover Apple products, cameras, phones, cars, appliances, and more.

They regularly publish teardowns of new products, but in this case tore down an actual chip.  The photo above is the top metal layer of the Apple A4 processor die.  The A4 package contains 3 dice, the processor and two SDRAM.  The teardown work was performed by Chipworks in Ottawa, a company that specializes in destructively analyzing semiconductors.  They have a whole array of specialized equipment just for this:  grinders and acid baths to expose the die, X-ray machines, optical and scanning electron microscopes, all contained in a clean room.

Although not confirmed by Apple, the article surmises that the A4 is based on the ARM Cortex A8 processor, which I think is pretty neat, since I spent several years working on that part here at ARM.  However, please don’t blame me for your iPhone 4 dropped calls — it’s your thumb that’s at fault.