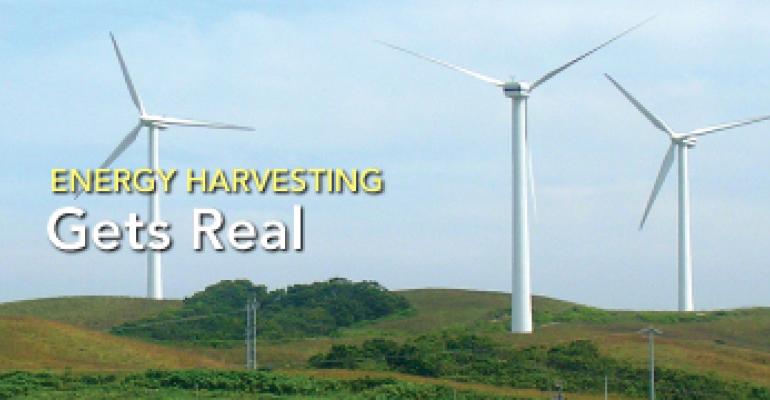 Man's quest to build perpetual motion machines is taking an unexpected twist these days, as electronics' makers and start-up companies team up on a new breed of ultra-low-power products with the potential to run, well ... almost forever.

To be sure, these new applications don't violate the First Law of Thermodynamics. Nor the Second, for that matter. But they're out there and they're harvesting enough energy from mechanical vibrations, temperature gradients, sunlight and even human body heat to do things that couldn't have been done previously.

"The technologies are maturing to the point where they are commercially viable," says John Perzow, marketing director in Analog Devices' Power Management Group. "When it comes to advanced energy transmission, there's an alignment of the planets going on right now."

Indeed, the forces behind the concept of energy harvesting seem almost supernatural these days. Even in today's tough economic times, investment houses and electronics' manufacturers are socking money into new companies with names like AdaptivEnergy, EnOcean, Cymbet and Perpetuum, among countless others. And big electronics' manufacturers, such as Texas Instruments (TI) and Analog Devices Inc. (ADI), are building microcontrollers, digital signal processors and sensors for the new breed of power-stingy applications.

As a result of all this cooperative work, there could be a whole new class of renewable energy applications on the horizon. Bridges and buildings might monitor structural health with battery-less sensors powered by photovoltaic cells. Farmers could check soil moisture with solar-powered devices. Mechanical vibrations could serve as an energy source for monitors of everything from vehicle door lock switches to electric motors.

Engineers say the real beauty of all those applications is they can now be done without wires or batteries, while at the same time saving power. "Energy systems like these are an essential issue of our times," Perzow says. "They're getting unbelievable amounts of attention and investment - dollars, pounds, Euros, drachmas - you name it. Every industrialized nation is involved in this."

The question is: How will engineers make such scenarios possible?

Today, it appears there is no single answer. To make it work electronics' suppliers have already taken the first step by creating microcontrollers, digital signal processors, RF transceivers and MEMS sensors that operate on electrical currents so small they're measured in millionths of an amp. TI's MSP430 microcontroller, for example, consumes just 160 muA/MHz (microamps per megahertz) in an active state and 1.5 muA/MHz in standby. Similarly, ADI has created an ultra-low-power MEMS (microelectromechanical systems) sensor, the ADXL345, which can pull as little as 120 muA in full dynamic range and 25 muA in sleep mode. Such products could be an order of magnitude less than everyday microcontrollers and sensors that typically draw current in the milliamps, rather than microamps.

"The idea is to be able to run applications autonomously, remotely, maybe without a battery ... forever," says Perzow, in a bit of hyperbole that's common in energy harvesting circles.

Up until now, engineers with potentially brilliant energy harvesting ideas were handcuffed, largely because the current from silicon solar cells and other scavenging devices wasn't enough to run a microcontroller or an accelerometer. Now, engineers say, that's changing. Harvesting devices are improving their energy conversion, while electronic products are lowering their power requirements.

"Low power electronics are really the driver for all of this," says Troy Tanner, chief technical officer for AdaptivEnergy, a maker of piezoelectric devices that convert vibration to electrical energy. "With our power increasing and their power decreasing, we can start doing something useful."

The Dawning of 'Pervasive Power'

Useful, indeed. St. Joseph Elementary School in Lacolle, Quebec recently realized the benefits of energy harvesting when it retrofitted its classroom temperature controllers using a system developed by EnOcean and Regulvar Inc., a maker of HVAC products. The controllers, wireless and battery-less, draw power from photovoltaic cells. Electrical current from the cells runs a microcontroller and an RF transceiver that feeds temperature data to the HVAC architecture, which then parcels out the correct amounts of heat.

Similarly, a Boston-based company has installed wireless occupancy sensors and light switches as a means of reducing energy consumption. The occupancy sensors harvest energy from ambient light, while the switches draw power from the mechanical energy that's generated when people press the light switch. Wireless signals are transmitted over an RF frequency of 315 MHz using an EnOcean protocol.

Such applications are groundbreaking, not because they rely on photovoltaic conversion, but because of how they use the trickle of current from those photovoltaic cells. Based on those wee currents, sensors can see, processors can think, transceivers can communicate.

Moreover, the list of capabilities is growing. Texas Instruments teamed with Cymbet Corp. to bring "battery-on-a-chip" technologies into the energy harvesting mix. Cymbet's EnerChip is essentially a thin film battery on a silicon substrate. Using the concept, makers of energy harvesting systems will be able to store energy that's been scavenged from ambient light or sunlight. As a result, when applications go into complete darkness, they'll still have enough stored energy to do between 400 and 1,000 RF transmissions.

Engineers say the battery-on-a-chip idea is significant because it raises the possibility of so-called "pervasive power," in which the capacity for power generation is built into everyday objects.

"With this, we can start to imagine a day when power will be spread around and energy will be stored in the chips," says Steve Grady, vice president of marketing for Cymbet.

TI has packaged the EnerChip in a developer's kit that includes the TI MSP430 microcontroller, CC2500 RF transceiver and the eZ430-RF2500 developer tool on a credit-card-sized circuit board. Known as the eZ430-RF2500-SEH, the kit targets developers who want to convert light to current and then employ the current to run applications that need to communicate wirelessly.

"The MSP430 works straight off the solar panel," says Adrian Valenzuela, MSP430 marketing manager for TI. "But if the environment becomes too dim or if it's in complete darkness, the processor knows that there's not enough energy to harvest and it automatically switches over to be powered by the EnerChip."

"Every energy harvesting product needs a way to store energy," Grady adds. "We chose the solar cell because it's nice and easy to use."

Still, photovoltaic cells are hardly the only source of harvested energy. Thermodynamic theory has long held that a simple temperature gradient has the potential to dissipate power. Now, engineers are starting to find ways to use that power to drive sensors and monitors. Automotive suppliers, for example, are said to be working on tire pressure monitoring systems that can scavenge energy from the heat in the tire and use it to drive RF transmitters. With that concept, engineers hope to wirelessly provide information on tire pressures, temperatures and even tread wear.

The most popular and promising source of energy, however, may be mechanical vibration. Most start-ups in the energy harvesting arena are looking at ways to transform mechanical energy. AdaptivEnergy, for example, is converting vibration to electrical energy in a product called the Joule-Thief(TM), which employs a cantilevered piezoelectric beam to carry out the conversion. When an inertial force deflects the tip of the cantilever, it introduces mechanical strain in the piezo layer, which causes polarization and, ultimately, produces an electrical current. The company's engineers are targeting the device at such applications as structural health monitoring, wearable electronics, RFID systems and wireless sensing and switching applications. Automakers are said to be looking at the technology, in hopes of replacing some of the bundled wiring in car bodies.

"You could eliminate many of the power cables and signal cables for simple applications like door switches," says Tanner of AdaptivEnergy. "If you add up all the copper and all the weight from cables, it ends up being a big savings for the automakers."

Experts say energy harvesting may also be on the verge of serving as a "health monitor" for renewable energy sources. Analog Devices' engineers describe a scenario in which wind turbines scavenge their own energy to power microcontrollers and sensors to "listen" for problems in the wind mills.

"You could actually use a MEMS device to look for an anomalous frequency of a shaft," says Wayne Meyer, horizontal marketing manager for the Micromachined Products Div. at ADI. "It might give you an indication that a shaft is out of alignment or a bearing is bad."

Similar scenarios could apply to solar arrays. With low-power MEMS sensors, solar panels could track the sun more efficiently as it moves across the sky and then position themselves for maximum exposure.

The reason for using such technologies is clear. Many potential applications move from dream to reality when engineers eliminate the need for batteries.

"If you have something in a remote region that's hard to reach, you want to use parts that won't have to be replaced or maintained for years," Meyer says.

Start-ups recognize that no such applications could happen without the commitment of big electronics' suppliers who enable the energy harvesting systems to sense, convert, amplify, process and transmit signals.

"This technology will benefit existing applications, as well as applications that would have been impossible to do otherwise," says Valenzuela of TI. "There's a huge, huge potential market here."