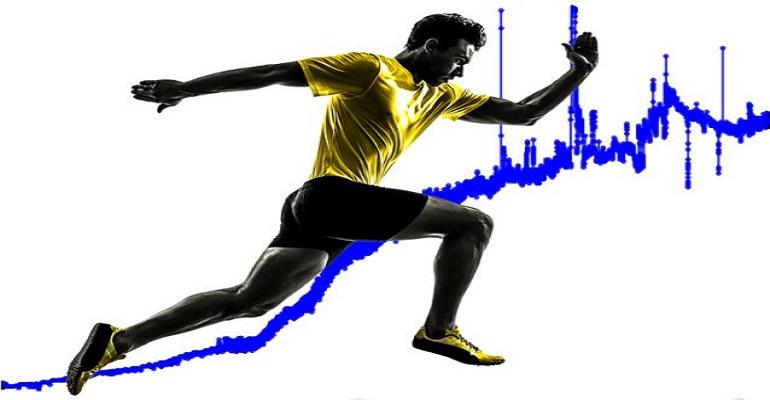 The graphic shows the lactate curve captured by a sweat sensor developed by researchers at Tufts University during exercise. The flexible patch can be woven into clothing for health and fitness monitoring.
Wearable devices can be used by athletes to monitor performance or patients that need help tracking chronic ailments.

Wearable devices that can help monitor people’s fitness levels are already popular. But researchers have been steadily evolving this technology to help people keep track of not only their fitness but also their health.

Researchers at Tufts University are among scientists involved in this endeavor. They recently developed a sensing patch that can be sewn into clothing to analyze someone’s sweat for biomarkers. The wearable technology uses a combination of special sensing threads, flexible electronic components, and wireless connectivity.

Related: Medical wearables: What they're wearing at CES this year

Other scientists at Tufts already had previously developed threads that can be woven into clothing to detect harmful environmental gases, and the patch includes technology that’s similar to this work.

Indeed, one of the members of the team that created the new patch said it’s part of a larger strategy from Tufts researchers to make completely flexible thread-based electronic devices to provide non-invasive health monitoring.

“Flexible devices woven into fabric and acting directly on the skin means that we can track health and performance not only non-invasively, but completely unobtrusively– the wearer may not even feel it or notice it,” Sameer Sonkusale, professor of electrical and computer engineering at Tufts’ School of Engineering, said in a press release.

The patch provides real-time measurements of biomarkers in sweat–including sodium and ammonium ions (electrolytes), lactate (a metabolite), and acidity (pH). These biomarkers can be key to helping those wearing the patch and medical professionals information to make diagnoses of physical ailments.

Athletes can use the patch to track their performance in a deeper way than is possible with current health-monitoring wearables, researchers said. The sensor also can help people track their health as related to chronic diseases, they said.

For example, sodium from sweat can indicate the hydration status and electrolyte imbalance in a body, while lactate concentration can be an indicator of muscle fatigue. Chloride ion levels can be used to diagnose and monitor the chronic disease cystic fibrosis; and cortisol, a stress hormone, can be used to assess emotional stress, as well as metabolic and immune functions.

“Sweat is a useful fluid for heath monitoring since it is easily accessible and can be collected non-invasively,” Trupti Terse-Thakoor, formerly a post-doctoral scholar at Tufts University School of Engineering who worked on the project, said in a press statement. “The markers we can pick up in sweat also correlate well with blood plasma levels which makes it an excellent surrogate diagnostic fluid.”

Flexible threads coated with conductive inks are key to integrating the sensors into clothing as well as picking up the particular biomarkers, as different coatings alter the functionality of the threads.

Lactate, for example, can be detected by coating a thread with an enzymatic sensing material incorporating the enzyme lactate oxidase, which a thread coated with polyaniline measures pH because it responds to acidity.

The thread sensors can be integrated into clothing or a wearable patch that is connected to a miniature circuit module and microprocessor. The system also includes wireless capability to communicate with a smartphone so it can send measurements to a corresponding app.

Researchers published a paper on their work in the journal NPJ Flexible Electronics.

To test the device, researchers monitored electrolyte and metabolite response while people—representing varied physical conditioning and types of diet—exercised to their maximum exertion on stationary bikes.

Results showed that the device could detect variation in analyte levels as the test subjects moved up and down, within 5- to 30-second intervals, which researchers said sufficient for most real-time tracking needs.