HomeElectronicsSpeedy Insect-Sized Robot Can Move Like a Cheetah
Recent
Electronics
Will I See You at the Virtual 2022 RT-Thread IoT OS Global Tech Conference?
May 27, 2022
Novel Silk-Protein Eyed for Tendon Repair
May 27, 2022
NTT Data Powers Indy 500 Predictive Analytics
May 27, 2022
At NI Connect: More Companies Discuss Benefits of Test
May 27, 2022
POLL
Supplier News is Checking Out Programmable Automation Controllers
May 27, 2022
What's the Latest in Additive Manufacturing?
May 26, 2022
Top Gun: Maverick Roars into Theaters
May 26, 2022
New 3D Printing Technique Prints Glass for Microstructures
May 26, 2022 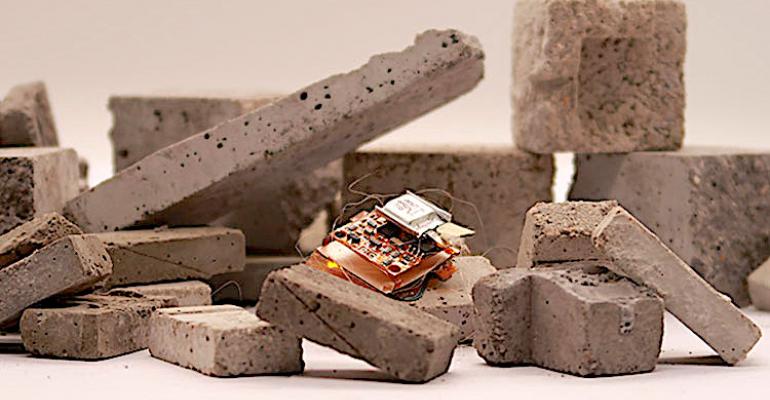 The robot is built of a layered material that bends and contracts when an electric voltage is applied, allowing it to scurry across the floor with nearly the speed of an actual cockroach.
Researchers at UC Berkeley bolster the agility of machines with electrostatic footpads to allow for quick turns, more controlled movements, and more stability overall.

Researchers have combined the agility of a cheetah with the ability of insects to scale walls and complex terrain in their design of an insect-sized robot that can move rapidly and sure-footedly for potential use in disaster scenarios.

The latest work from a team at the University of California, Berkeley led by Liwei Lin, a professor of mechanical engineering, builds upon a design developed in 2019 to create a cockroach-sized robot that can move across a flat surface at a rate of 20 body lengths per second.

That speed—the equivalent of 1.5 miles per hour—is nearly as fast as an actual cockroach can move. At the time, the robot was the fastest speed in terms of size for any robot of its kind.

Now researchers have added two electrostatic footpads to the robot, giving it more range of motion as well as making it easier to control, they said.

Related: Robots That Move Like Cats? What Will They Think of Next?

The footpads work similarly to the sticky appendages of actual insects to allow the robot to stick more firmly to a surface. Using electrostatic adhesion--that is, a voltage applied to either of them increases the electrostatic force between the pad and the surface—allows the pads to stick while the rest of the robot can pivot on the foot, researchers said.

Giving the robot this stability allows for more overall control over the robot’s movement, Lin said. While the original machine--made from a thin, layered material that bends and contracts when an electric voltage is applied--“could move very, very fast,” researchers couldn’t control the direction in which it moved, he said. Actually, more often than not it would move randomly, he said.

“If there was a slight difference in the manufacturing process — if the robot was not symmetrical — it would veer to one side,” Lin said in a press statement.

The latest design iteration improves this aspect significantly, he said. “In this work, the major innovation was adding these footpads that allow it to make very, very fast turns,” Lin said in a press statement.

Indeed, the two footpads give operators full control over the trajectory of the robot and allow it to make turns with a centripetal acceleration that exceeds that of most living insects, researchers said.

Researchers published a study on their latest research in Science Robotics.

The team demonstrated the robot’s new range and capability of movement with a fake, insect-sized disaster scenario. They filmed the robot deftly navigating Lego mazes while carrying a small gas sensor and swerving to avoid falling debris.

Most of these skills were demonstrated while the robot was “tethered,” with operators using a small wire to control it. However, the robot also showed that it can operate on battery power without a wire for up to 19 minutes and travel 31 meters while carrying a gas sensor, something that’s unusual for a robot of its size, Lin said.

“One of the biggest challenges today is making smaller scale robots that maintain the power and control of bigger robots,” he acknowledged in a press statement. “When you try to shrink everything down to a smaller and smaller scale, the weight of [power-source] elements become difficult for the robot to carry and the robot generally moves very slowly. Our robot is very fast, quite strong, and requires very little power, allowing it to carry sensors and electronics while also carrying a battery.”

The robot also showed durability in experiments, proving it could survive even after it was stepped on by a 120-pound human, researchers said.

Lin and the team envision that the robots could be used for real-life scenarios similar to the one that was tested, such as in a gas leak, or for search-and-rescue during disasters, researchers said.