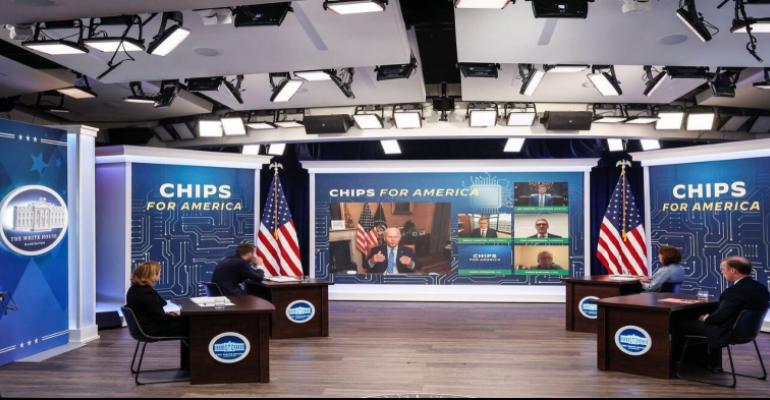 President Biden is expected to sign the CHIPS Act bill that will pump $52 billion into the U.S. economy to help electronics and other industries fund more onshore manufacturing and expedite critical research and development projects.
Long-awaited bill expected to jumpstart softening U.S. economy with incentives to bolster onshore R&D and manufacturing.

The U.S. electronics industry received some good news this week with the Senate finally passing the CHIPS Act, a bi-partisan bill that will pump $52 billion of funding into the domestic economy to fund research and development and manufacturing, as the country seeks to stay competitive in a global economy ravaged by ongoing geopolitical conflict and supply-chain issues that have shown no signs of easing.

The Senate’s 64-32 vote ends months of back-and-forth debate on the CHIPS Act, which was originally introduced two years ago but has undergone substantial revision. The bill is expected to be cleared by the House for final approval before going to President Biden who has long urged passage of the bill and will not hesitate to sign it.

Related: Biden Pushes Hard for Reshoring in State of the Union

U.S. Senator Chris Coons (D-Del) has been one of the CHIPS Act’s more ardent supporters, and he wasted no time extolling the virtues of the bill’s passage.

“Investing in manufacturing and economic competitiveness will improve our national security, bring down costs on major purchases for working families, and strengthen economic outcomes for years to come,” Coons said in a statement. “In addition to incentivizing domestic production of semiconductor chips, this bipartisan package invests in energy security and innovation, plants the seeds for regional technology hubs, and commercializes clean energy technology to create jobs in Delaware and across America.

Among other measures, the bill would create a non-profit foundation for the Department of Energy to help channel private-sector investments to commercialize new energy technologies, including next-generation batteries and low carbon fuels.

The CHIPS Act would also establish a Regional Technology Hubs program, to expand research, innovation, and the tech economy to more cities across America. This legislation will allow American research in biomedical technology, advanced manufacturing, and other crucial sectors to thrive, while also ensuring the gains from these jobs are no longer concentrated in a small number of metropolitan areas.

Another element will be the launching of a pilot program to make long-term investments in persistently distressed communities that can be used for infrastructure investment, workforce development, small business assistance, and other investments to help communities rebuild.

By and large, the U.S. electronics industry has supported the CHIPS Act. Industry associations such as the SIA (Semiconductor Industry Association), which has long been an active proponent of the CHIPS Act, released a statement on its site lauding the Senate’s passage of the bill.

Major electronics companies such as Intel have also advocated the passage of the CHIPS Act. The semiconductor giant has over the past year launched efforts to bring more of its chip production onshore. In January, Intel announced it would build two new assembly plants in New Albany, OH, outside Columbus.

The CHIPS Act passage comes at a critical juncture for the U.S. economy.

While demand remains strong, particularly for advanced products for next-generation technologies, ongoing supply-chain issues that were exacerbated by the COVID-19 pandemic have generally not subsided. Ongoing trade issues with China, the hub of many global electronics manufacturing, as well as some plant shutdowns there earlier this year have contributed to unease among many companies. Not helping matters is the continuing crisis in the Russia/Ukraine region, which houses some raw mineral deposits and is a manufacturing outpost for parts such as wiring harnesses.

Whether the CHIPS Act passage will stem the tide of a recent softening in the economy is uncertain. Several major companies have warned of middling second-quarter earnings, and there has been a spate of recent announcements of layoffs and other job actions, particularly by startup companies.

Some analysts expect the combined effect of increased production capacity and softening demand to bring the electronics supply/demand balance into more equilibrium, but the effects likely won’t be felt until next year.