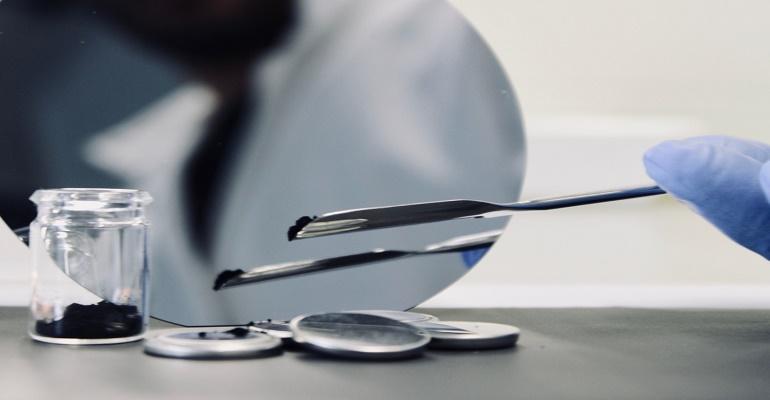 Schematic representation of the perovskite crystal structure of lithium lanthanum titanate used in a new battery anode developed by researchers from Germany’s Karlsruhe Institute of Technology (KIT) and China’s Jilin University in Changchun.
Researchers discover a material that can boost various aspects of energy storage for a range of future applications.

Future batteries for everything from electronics to vehicles will demand high energy density in as small and lightweight a device as possible, a challenge scientists have been trying to solve in new device designs.

Now researchers from Germany’s Karlsruhe Institute of Technology (KIT) and China’s Jilin University in Changchun have developed a new anode comprised of a material they believe is well-suited to these future high-performance lithium-ion batteries.

The anode, comprised of the material lithium lanthanum titanate with a perovskite crystal structure, or LLTO, allows for improvements across the board in myriad aspects of battery technology, including energy density, power density, charging rate, safety, and cycle life.

Currently, anodes of lithium-ion batteries use graphite as the active material that is applied to the component’s current collector to store energy in the form of chemical bonds.

But there are well-documented and studied problems with graphite. One is that negative electrodes made of the material have a low charging rate. The other is that these anodes are associated with safety issues such as explosions and fires that can occur when dendrites, or needle-like structures, that form inside the battery.

Researchers have already used lithium titanate (LTO) in commercial lithium-ion batteries to replace graphite in a more widespread way to bolster the performance of future batteries. Negative electrodes with LTO already have shown a higher charging rate and are considered safer than graphite.

However, one drawback to lithium-ion batteries that use LTO anodes is that they tend to have a lower energy density. This is the problem the team managed to solve using LLTO, which is a material similar.

Researchers—who also included additional scientists in Singapore and China—found that LLTO anodes have a lower electrode potential compared to commercialized LTO anodes, allowing for a higher cell voltage and a higher capacity.

This is critical because “cell voltage and storage capacity ultimately determine the energy density of a battery,” Helmut Ehrenberg, head of the Institute for Applied Materials – Energy Storage Systems at KIT, said in a press release.

This discovery now paves the way for LLTO anodes for developing “particularly safe high-performance cells with a long cycle life,” he said in a press statement.

The material also showed positive signs for another key factor in determining how a battery performs long-term in demanding applications--charging rate, researchers noted. Related to this, it also enables simpler and more cost-effective electrode manufacturing processes for batteries, Ehrenberg said.

To improve the charging rate of a battery, it’s a common practice to reduce the particle size of the electrode material from micro to nanoscale, researchers said, which also adds complexity to the manufacturing process.

This change is done because, in principle, the maximum discharge current and the minimum charging time of the battery depend on the ion and electron transport both within the body and at the interfaces between the electrode and electrolyte materials.

With LLTO, researchers found that no reduction needs to be made, as even particles of a few micrometers in size in LLTOs with a perovskite structure feature a higher power density and a better charging rate than LTO nanoparticles.

They believe this is the case because both individual electrons and charged ions are attached to LLTO, the latter of which are bound by weak forces and can reversibly transfer charges to the anode.