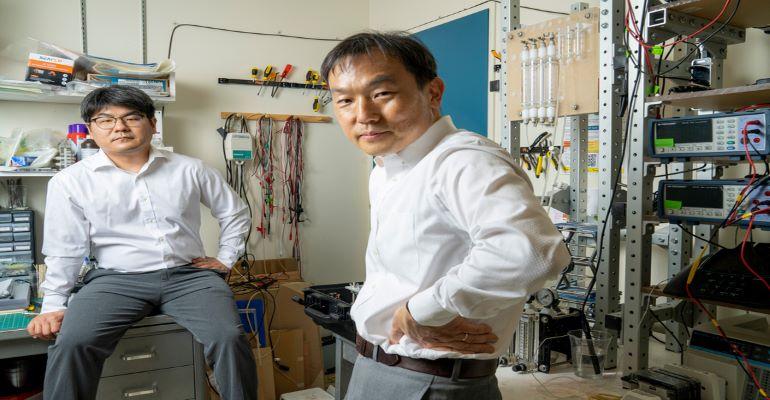 While clean drinking water is taken for granted in developed regions of the world, there are still remote areas where obtaining clean water can be a challenge. To alleviate the problem, MIT researchers have developed a portable, lightweight desalination unit that removes particles and salts where needed to produce clean drinking water.

The desalination unit is contained in a suitcase-sized device that requires less operating power than a cell phone charger. It can also be driven by an available portable solar panel. The water produced by the unit exceeds World Health Organization quality standards, using electrical power rather than traditional filters to remove particles from drinking water.

The researchers envision the unit being deployed in remote and resource-limited areas, such as communities on small islands or aboard cargo ships. The unit could also be useful during natural disasters or long-term military operations.

“This is really the culmination of a 10-year journey that I and my group have been on,” said Jongyoon Han, senior author of the study and a professor of electrical engineering and computer science and of biological engineering, as well as a member of the Research Laboratory of Electronics (RLE). “We worked for years on the physics behind individual desalination processes, but pushing all those advances into a box, building a system, and demonstrating it in the ocean, that was a really meaningful and rewarding experience for me.”

Han was assisted by first author Junghyo Yoon, a research scientist in RLE; Hyukjin J. Kwon, a former postdoc; SungKu Kang, a postdoc at Northeastern University; and Eric Brack of the U.S. Army Combat Capabilities Development Command (DEVCOM). The research has been published online in Environmental Science and Technology.

According to Yoon, commercially available portable desalination units typically require high-pressure pumps to push water through filters, which are very difficult to miniaturize without compromising the device’s energy efficiency.

The researchers instead deployed a technique called Ion Concentration Polarization (ICP), pioneered by Han’s group a decade ago. Rather than filtering water, the ICP process applies an electrical field to membranes placed above and below a channel of water. These membranes repel and funnel charged particles into a second stream of water that is eventually discharged.

The scientists added an electrodialysis module to the desalination process to remove the salt ions the ICP process could not remove. “While it is true that some charged particles could be captured on the ion exchange membrane, if they get trapped, we just reverse the polarity of the electric field and the charged particles can be easily removed,” said Yoon.

The researchers used machine learning to optimize the combination of ICP and electrodialysis modules for effective water treatment and minimal energy usage. They were then able to shrink the size of the ICP and electrodialysis modules to fit inside a portable device that a user can activate just by pushing a button. Once the salinity level and the number of particles decrease to specific thresholds, the device notifies the user that the water is drinkable.

The researchers also created a smartphone app that can control the unit wirelessly and report real-time data on power consumption and water salinity.

During field testing of the prototype device at Boston’s Carson Beach, the scientists were able to generate clean drinking water within 30 minutes. The resulting water exceeded World Health Organization quality guidelines, and the unit reduced the number of suspended solids by at least a factor of 10. The prototype device produces drinking water at a rate of 0.3 liters per hour and requires only 20 W of power per liter.

Yoon hopes to make the device more user-friendly and improve its energy efficiency and production rate through a startup he plans to launch to commercialize the technology.

The research was funded, in part, by the DEVCOM Soldier Center, the Abdul Latif Jameel Water and Food Systems Lab (J-WAFS), the Experimental AI Postdoc Fellowship Program of Northeastern University, and the Roux AI Institute.