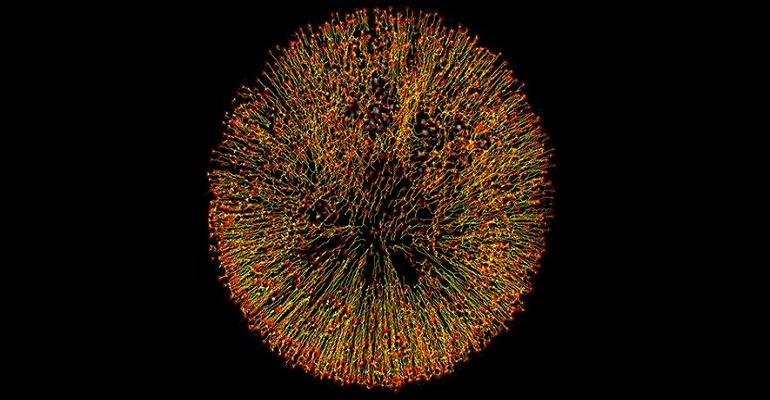 Drying droplets of inks observed in research developed by scientists at the University of Cambridge, who created a new family of inks that can be used to print next-generation electronic devices. The red arrows show the end of the particle trajectories.
A mixture of alcohol can be used in the process to manufacture sensors and electronics devices more cost-effectively.

Researchers have developed a new family of inks that overcomes the “coffee ring effect” to facilitate inexpensive fabrication of next-generation electronics such as sensors, light detectors, batteries, and solar cells.

A team at the University of Cambridge spent years studying the physics of ink droplets, which dry in a spherical pattern that’s easily observed by spilling coffee on a table and seeing the ring that forms on its surface.

The team, led by Tawfique Hasan, a professor in the university’s Cambridge Graphene Centre, combined particle tracking in high-speed micro-photography, fluid mechanics, and different combinations of solvents to create the new inks, which are comprised of a solution that mixes isopropyl alcohol and 2-butanol.

This solution literally changes the way ink dries, distributing ink particles evenly across a droplet to generate shapes with uniform thickness and properties, Hasan, who collaborated with Colin Bain from Durham University and Meng Zhang from of Beihang University on the research, said.

“The natural form of ink droplets is spherical--however, because of their composition, our ink droplets adopt pancake shapes,” he said in a press statement.

The reason coffee rings form is because liquid evaporates quicker at the edges, which causes solid particles to accumulate; this results in the ring that most people have observed.

Inks behave in the same way during printing, with particles in the ink accumulating around the edges, creating irregular shapes and uneven surfaces, researchers said. This effect is especially strong when printing on hard surfaces like silicon wafers or plastics, making it currently a complex proposition to print electronic devices with traditional inkjet methods.

Understanding this formation is what led to the development of the new ink, the droplets of which deform smoothly across a surface to spread particles in a consistent way.

The ink can be used with existing inkjet printing methods as an inexpensive way to fabricate electronic devices and sensors, particularly for the Internet of Things (IoT), Hasan said.

Moreover, the process can meet the production levels needed for mass manufacturing, said Guohua Hu, one of the researchers on the project and first author of a paper about the research published in the journal Science Advances.

“Our formulation can be easily scaled up to print new electronic devices on silicon wafers, or plastics, and even in spray painting and wearables, already matching or exceeding the manufacturability requirements for printed devices,” he said in a press statement.

To prove this, researchers tested the ink to print 4,500 nearly identical devices on a silicon wafer and plastic substrate. Gas sensors and photodetectors were among the devices they printed, which they said performed similarly to existing devices printed with traditional methods.