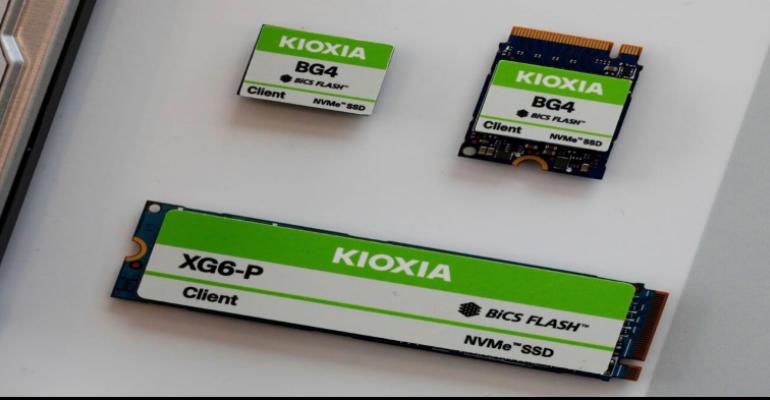 Kioxia, originally Toshiba Memory, remains one of the anchors of the NAND flash memory market.
Two executives of Kioxia (formerly Toshiba) look at the history and outlook for NAND flash memory, which continues to drive storage in many consumer and industrial products.

NAND flash memory is everywhereꟷin mobile phones, cameras, solid state drives in computers, and storage drives in data centers. But this technology, first unveiled by Fujio Masuoka of Toshiba in 1987, was originally seeking a home.

Toshiba Memory Corporation is the company that invented NAND flash, and the company has helped spearhead the growth of the technology for over three decades, along the way changing its name to Kioxia Corporation in 2019. Two executives of Kioxia’s U.S. subsidiary Kioxia America ꟷ Scott Nelson, Senior Vice President and Chief Marketing Officer, and Scott Beekman, Vice President, Memory Business Unit, recently spoke to Design News on the growth of NAND flash and what the future holds for the technology.

According to Nelson, a long-time executive of Kioxia, in the early years of NAND flash the rich array of digital storage applications now routinely associated with the technology did not exist yet. He recalled the first significant use for NAND flash as the digital answering machine, in the mid 1990’s. “It was a solution looking for a problem to solve,” Nelson said.

Beekman added, “The concept was to find solid-state storage analogous to a spinning disk,” referring to disk drives that were invented years earlier and were the predominant storage mechanism in computers for many years. “For any technology, it takes time to learn how to use it.”

In more recent years, NAND flash has found its way into portable computers, in many cases supplanting hard disk drives, as well as storage devices in data centers. The market for NAND flash is now estimated to be in the $75 to $80 billion range, according to Nelson.

Over the years, NAND flash has vastly benefitted from improvements in density and performance. “A lot of the factors that enabled Moore’s Law to shrink the size of semiconductors have also affected NAND flash,” said Beekman. “We have gone from single-level cells to multi-level cells, increasing density while lowering cost.”

Nelson added, “We ran planar technology in NAND flash until 2007 when Toshiba introduced 3D NAND flash. That was a big moment.”

Process and production improvements have along with leaps in scalable density brought about huge cost reductions, which become quite obvious to consumers buying NAND flash cards or products with flash memory.

Beekman noted that in the mid-1990s when NAND flash was just starting to emerge, $5 might buy 4 Mbytes of storage. “Today, a gigabyte of storage would cost maybe 10 to 20 cents.”

Some industry observers have commented that improvements in semiconductors attributed to Moore’s Law are starting to lose momentum. When asked whether this would affect NAND flash, the Kioxia executives didn’t think that would be the case.

“Moore’s Law will become more challenging,” Beekman conceded. “But a lot of innovative people will keep things going. Anyone who has bet against Moore’s Law in the past has generally lost.”

Some of the larger concerns facing the NAND flash sector are not the technology itself, but the broader supply-chain and economic issues that have affected the broader electronics sector.

“The biggest issue in recent years has been getting materials and products between different points,” Nelson said. He noted that all of Kioxia’s memory fabs are in Japan, with some dicing, testing, and other assembly functions in Taiwan and China. Many of the end products using flash memory reside in the Far East.

NAND flash has not been immune to the ups and downs in electronics supply and demand. “It is a technology where elasticity of demand is a function of price,” Nelson said. “But we continue to make fab investments, depending on market dynamics.”

While the NAND flash business is subject to the effects of fluctuations in supply and demand, the fact that there are only a small number of playersꟷthe others include Micron, Hynix, Samsung, and SanDiskꟷ helps to limit the competition. Beekman noted that memory production is a capital-intensive business with specialized processes, coupled a high cost of entry.

Looking into the future, Beekman expects ongoing efforts from Kioxia and rival NAND flash makers to increase cell density and achieve more bits per cell. Nelson added that the insatiable demands of data centers for cloud and hyperscale computing, edge computing, and other applications will in turn put more demands on memory suppliers for scalable, low latency memory.