Meet the Most Comfortable Keyboard on the Planet 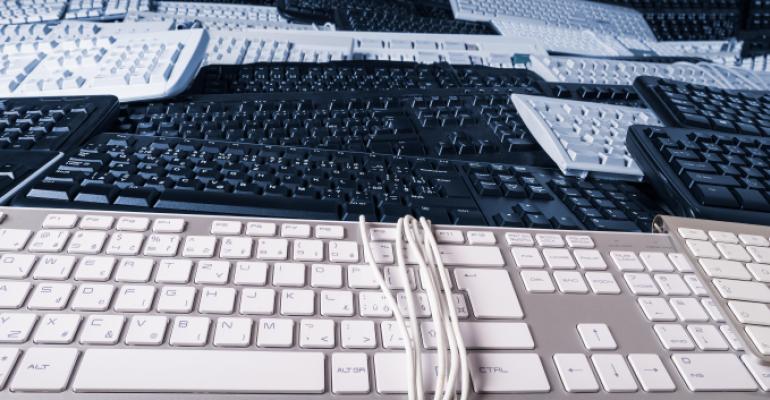 Just when I was poised to succumb to doom and gloom, I took possession of a CLEAVE keyboard.

When I was a lad of about 16, my mother begged me to learn to type and to learn Pitman shorthand, which was developed by Englishman Sir Isaac Pitman (1813–1897). Pitman first presented this new way of writing in 1837, which -- apropos of nothing at all -- was the same year American inventor and painter Samuel Finley Breese Morse (1791–1872) introduced the Morse telegraph and Morse code.

My mother is an interesting lady. She was born in 1930 in the city of Sheffield in the county of Yorkshire in the country known to the poets as Albion (also referred to as Great Britain by the unwashed masses), which means she was only nine years old when WWII broke out.

Mom’s family lived in a teensy rented row house in one of the poorest parts of Sheffield. There were just two rooms downstairs, and they used only one of these as the family room for everyday living. The back door to the house opened directly into this family room. One wall of the family room housed a large coal-powered range (stove, oven, and water heater) that was used both for cooking and heating -- any heat that escaped the family room spread throughout the rest of the house. From the road, the front door to the house opened into the “special” room, which was used only to celebrate births, weddings, christenings, and funerals.

There were also just two small bedrooms. Mom’s grandfather (my great-grandfather) had one, mom, her sister Shirley, and their parents shared the other, while mom’s older brother Harry shivered himself to sleep each night in the loft.

Related: The Generative Design: From Clunky Computers to Infinite Possibilities

There was no bathroom. There was just one cold water tap feeding the house, and this was mounted over the range in the family room. The row houses formed three sides of a square, accompanied by a block of outside toilets (one per house), which was located on the fourth side. Friday night was bath night. A tin bath that was stored in the cellar was hauled up into the family room and filled with hot water from a tank on the side of the range. The kids bathed first from youngest to oldest. As they came out, they were dried, given a drink, and sent to bed. Then the water was changed, and the adults took their turn, starting with my great-grandfather followed by my grandparents who used the same water.

Great-grandfather would have no truck with new-fangled things like electricity, so it wasn’t until he shuffled off this mortal coil circa 1942 that my grandmother had an electric supply installed in the house. Prior to that, they used wall-mounted gas lanterns to light the rooms and -- based on her knowledge of how these would leak gas if not properly turned off -- my grandmother would cover any unused electric sockets with sticky tape to stop the electricity leaking out.

The only reason my grandmother had electricity installed in the first place was because (a) she was deaf and (b) she wanted a radio. Your knee-jerk reaction may be that these reasons were somewhat in opposition to each other, but she had a cunning plan. Grandmother was born hearing. She went completely deaf following some illness like meningitis when she was around 17 years old, but she could still talk, and she quickly learned to read other people’s lips. My grandfather was away at sea in the Royal Navy, so my 12-year-old mother was tasked with listening to the news on the radio and relaying it to my grandmother.

My mother was brought up speaking a dialect known as Sheffield Tyke. It was while listening to the BBC radio announcers broadcasting from London that she realized that she needed to up her game and change her accent if she wanted to go far in the world (see To Get a Good Job, Talk Posh, Not Sheffield Tyke!). I don’t know about you, but I think this is pretty impressive -- I barely had a useful thought in my head when I was 12 myself.

Anyway, the long and the short of it is that my mom taught herself to speak posh by listening to the radio, she learned how to type and take shorthand at college, she got herself a job in the typing pool at one of the biggest engineering companies in Europe, and she rose through the ranks to become the personal assistant to the big cheese in charge, as part of which she got to travel the world.

When the big cheese retired, rather than working for his successor, mom decided to become a lecturer at a local college where she taught shorthand and typing in English, French, and German to both hearing and deaf students (no one ever accused my mom of being an under-achiever LOL). She quickly rose through the ranks to become one of the very few women Principal Lecturers in England (at that time, these positions were overwhelmingly occupied by men).

All of which brings us back to where we started, which was that -- when I was 16 -- my mother begged me to learn typing and shorthand. This was circa 1973 before computers appeared in every home and every office. I knew I was going to be an engineer, but I assumed that if I ever wanted to send anyone a letter, there would be someone else available to type it for me. Little did I know that I was destined to spend the vast majority of my working life slogging away on a computer keyboard.

I’ve worked on many keyboards in my time. I know that -- as we get older -- we are prone to talk of the “good old days” and we tend to view the past through rose-tinted spectacles, but I definitely think the industrial-grade keyboards I worked with in the late-1980s and early-1990s were better than the dross I typically run across today. As I recall, there was something more “substantial” about the keyboards of yesteryear, including their tactile feel and the comforting mechanical “click” sound of the keys as they were pressed.

Are you saddened by the mushy feel and soggy sound of your own keyboard? Well, turn that frown upside down and change it into a smile because I’m delighted to be able to inform you that the Happy Days are Here Again as Ben Selvin and the Crooners sang in 1930 (which, coincidentally, and as you will no doubt remember, was the year my mom was born).

The reason for my renewed spirits and the spring in my step (well, fingers) is that I recently took possession of a CLEAVE keyboard. This little rascal was conceived and crafted by the clever guys and gals at Truly Ergonomic -- I only wish I could get to meet them and shake them all by the hand (which is the best way to shake anyone, now that I come to think about it). 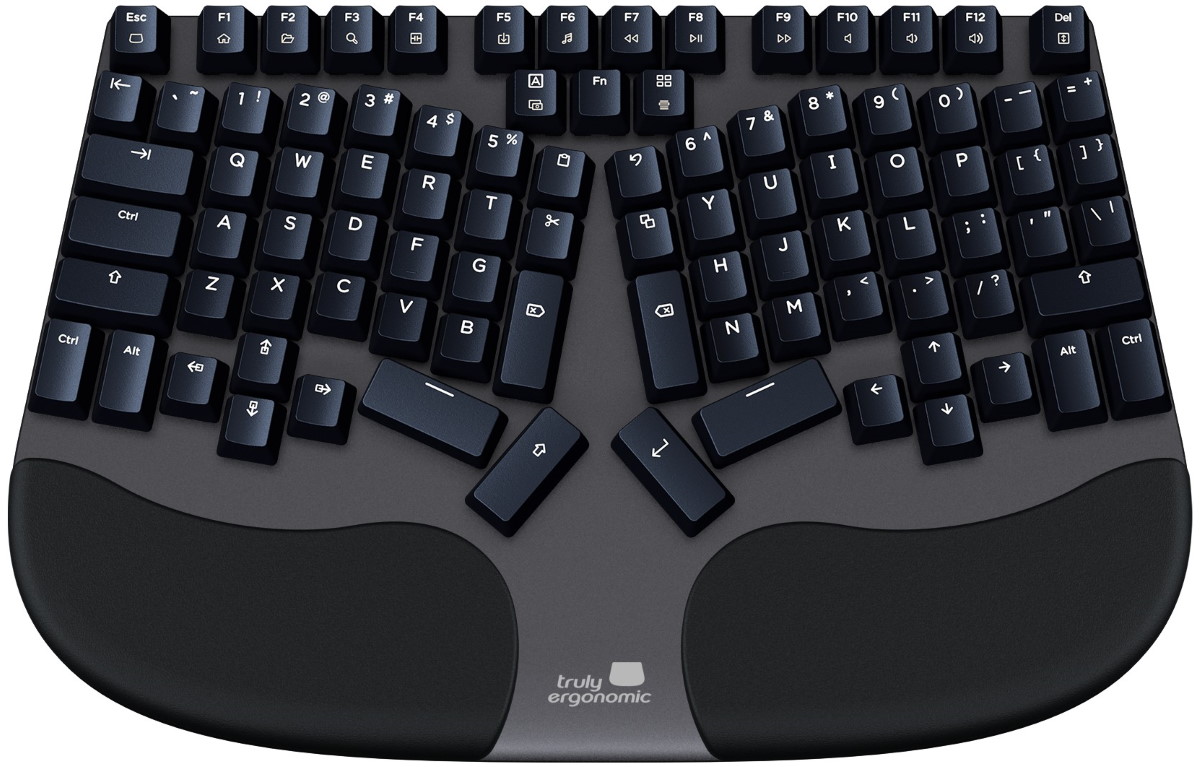 The chaps and chapesses at Truly Ergonomic are not shy about proclaiming that the CLEAVE is the most comfortable keyboard on the planet, and I’m certainly not going to argue with them about it.

There are so many awesome aspects to this bodacious beauty that I don’t know where to start. One thing that’s not immediately obvious from the above image is that -- in addition to the fact that the enhanced layout has the most commonly used keys within easy reach of your strongest fingers -- the height of the keys varies as you traverse the device, resulting in them being located just under your fingertips when you need them.

As I’ve already alluded, when it comes to keyboards, nothing beats the tactile feel and the satisfying sound of spring-loaded mechanical switches, which the CLEAVE boasts (actually, you can opt for tactile feedback with a soft click sound or tactile feedback with silent operation). My CLEAVE flaunts its audible click and I can honestly say that simply pressing a key is a delight. However, instead of relying on metal‑to‑metal contacts, each of the CLEAVE’s keys contains its own laser emitter and sensor that delivers lightning-fast actuation without any of the problems associated with their mechanical counterparts. I now have no fear of issues like duplicate key presses, key chattering, oxidation, switch-bounce-induced glitches, performance degradation, and double of missing letters because these are all now things of the past. 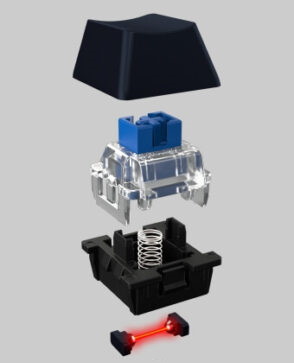 I could waffle on about this for hours. Suffice it to say that if you spend any amount of time typing, then you should really consider splashing the cash for a 21st-century CLEAVE keyboard. I should probably point out that you do need to be able to touch type -- if you are a two-fingered hunt-and-peck typist, then you will probably be better advised to stick with your existing 20th-century keyboard.

I’m not saying CLEAVEs are cheap (the list price is $330, but they are currently on sale at $249, which is ~25% off). What I am saying is that if you spend any serious amount of time using a keyboard, then this is an investment in your physical comfort and emotional happiness that deserves serious consideration (mayhap this is the Christmas stocking-filler you’ve been looking for).

What say you? Do you have any tales to tell of keyboards you’ve loved or loathed over the years? If so, please share them with the rest of us in the comments below.