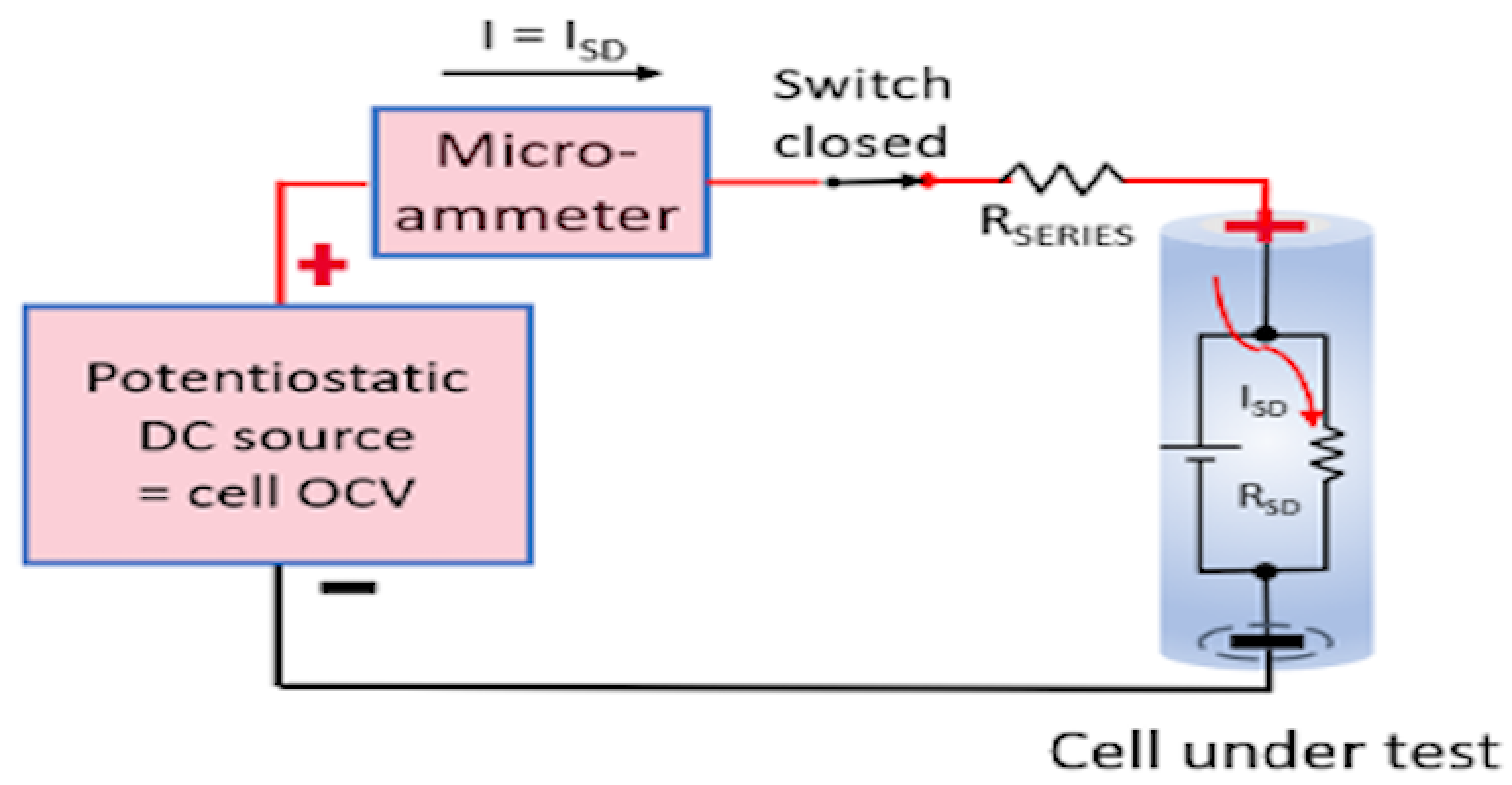 There are two main methods for testing self-discharge; the delta open-circuit voltage (OCV) measurement method and the potentiostatic method for measuring self-discharge current. These are illustrated in Figure 1.

Very briefly, for the delta OCV method, the Li-ion cell’s drop in OCV is measured over an extended period, typically weeks. A drop in OCV is an indirect indicator of loss of charge. This is the more traditional method used for measuring self-discharge.

In comparison, the potentiostatic method directly measures a cell’s internal self-discharge current is typically on the order of an hour. This is accomplished by holding the cell at a constant potential with a very stable external voltage source. At equilibrium, the current being supplied by the external source equals the cell’s internal self-discharge current, as the cell is being held at a constant state of charge (SoC) by the stable external voltage source.

A top priority for testing cells for self-discharge is getting consistent and valid results. This may seem straightforward in principle. However, in practice, most find it very difficult to get consistent and valid results with good correlation across multiple lots and test runs. The underlying challenge is that self-discharge is far from being relatively fixed and constant. Unless testing is very carefully controlled, the results will not be consistent, valid, or correlate well. This is true for either of the two methods for measuring self-discharge on lithium-ion cells, as well as trying to establish a correlation between the two different methods. Top factors affecting self-discharge measurement are illustrated in Figure 2. Note that some factors impact just the cells, just the measurement methodology, or both.

The % State of Charge (SoC) has a large impact on the cell’s self-discharge, as shown by the blue line in the graph in Figure 3, for the cells that were evaluated in this investigation.

As can be seen, the % SoC has a very large impact on self-discharge. Regardless of the actual %SoC level used, it is imperative that testing is always conducted at the same SoC level every time, to achieve consistent and valid results.

Increased physical pressure on the surface of cell induced by temperature changes, can become a secondary factor, contributing to additional self-discharge. This is a more-likely consideration for a pouch cell battery pack design where uneven thermal expansion of different materials may put pressure on the cell stack.

Temperature and Equipment Accuracy on the Delta OCV Measurement Method

Temperature and equipment accuracy have a large impact on the delta OCV method measurement. As shown in the graph in Figure 4 for the cells tested here. 10 days was needed to get enough OCV drop for achieving reasonably valid results. After 10 days there was 1 mV or less drop for the good cells and 2mV or more for the bad cells in the group of sixteen cells.

Based on the results in Figure 4, the dominant errors were analyzed and are summarized in Table 1.

Temperature and Equipment Accuracy on the Potentiostatic Measurement Method

Based on the results in Figure 5, the dominant errors were analyzed and are summarized in Table 2.

Charging causes the cell’s charge to have a gradient that needs to redistribute itself over time in order to return to an equilibrium state again. The initial peak OCV decay rate depends on how heavily the cells were charged before the start of OCV measurements. The impact of charge redistribution is that it adds offset to the self-discharge measurement until the cells are fully rested and at equilibrium again. When at equilibrium then the OCV decay rate becomes constant, due only to the cell’s self-discharge. To illustrate, a 10-day delta OCV measurement, started after 9 days of rest, is that it adds an offset of 0.3mV, or 30% to the measurement. This is shown by the expanded view in the circle of the inserted image in the graph in Figure 6. This highlights the need for having enough rest time after charging so that the charge redistribution effect does not overwhelm the desired self-discharge measurement. Note also, that the underlying self-discharge is unaffected. It is only the measurement method that is being impacted. The OCV drop due to self-discharge alone is still under 1 mV for the good cells and over 2 mV for the bad cells, just as for when the cells are tested when fully rested and at charge equilibrium.

Charging and Subsequent Rest Time on the Potentiostatic Method Measurement

The potentiostatic method for self-discharge measurements, like the delta OCV method, is similarly impacted by charging and subsequent rest time. The potentiostatic current measurement exponentially decays following charging, as shown by the blue line in the main graph in Figure 7.

To illustrate, for a 2-hour potentiostatic method measurement, started after 12 days of rest, the charge redistribution effect adds an offset of 2.4 µA or 30% to the measurement. This is shown by the inserted image in the graph in Figure 7. This highlights the need for having enough rest time after charging so that the charge redistribution effect does not overwhelm the desired self-discharge measurement. Note also, that the underlying self-discharge is unaffected. It is only the measurement method that is being impacted. The current measurement due to self-discharge alone is still under 8 µA for the good cells and over 16 µA for the bad cells, just as for when the cells are tested when fully rested and at charge equilibrium.

Impact of High-Temperature Aging on Rest Time After Charging

It is highly undesirable to have to wait for cells to rest for 9 to 12 days before being able to start any self-discharge measurements after any charging on the cells, as has just been described. This is the situation following the formation process in cell manufacturing, as the cells come out of formation having just been charged. High-temperature aging is routine practice following the formation process, as this greatly accelerates charge redistribution settling, greatly reducing the rest time. To illustrate, going from room temperature to 40 degrees C aging provides the range of a 3-fold acceleration in charge redistribution. The subsequent aging time is now in the range of 3 to 4 days, compared to the room temperature aging of 9 to 12 days.

The potentiostatic method measuring the self-discharge current is plotted on the vertical axis while the corresponding value using the delta OCV method measuring the rate of OCV loss for each cell is plotted on the horizontal axis. What was found is that, when a linear line was placed on all the points, they lined up with the line projecting back through the origin, demonstrating an excellent correlation between the two measurement methods. Several external factors were carefully controlled between the two methods to achieve excellent correlation, including:

Ed started at Hewlett Packard in 1979. During his 41 years with HP, Agilent, and now Keysight, Ed has been an engineer in R&D, manufacturing, and finally marketing in a variety of roles, now helping R&D and manufacturing customers with the application of DC power products and test systems for testing a variety of electronic devices. Presently Ed is responsible for gaining application insight in this industry and help customers with Keysight’s battery and cell testing solutions.