HomeElectronicsIntel Celebrates the 50th Anniversary of the Microprocessor
Recent
Electronics
Sponsored Content
Data as a Critical Raw Material
Researchers Study an Impenetrable Vintage Atari Game Algorithm
Nov 24, 2021
Black Friday and Cyber Monday – Fighting Chip Shortages and Cybersecurity
Nov 23, 2021
Design News Celebrates 75 Years
Nov 23, 2021
POLL
8 Great Car Gadgets to Update Your Ride
Nov 23, 2021
General Motors Charges to the Aid of Dealers Installing EV Charging Stations in their Communities
Nov 23, 2021
The Fundamentals of AR and VR – and how the Military Is Using Them
Nov 22, 2021
10 Best Family Cars for Going Over the River and Through the Woods
Nov 22, 2021

Intel Celebrates the 50th Anniversary of the Microprocessor 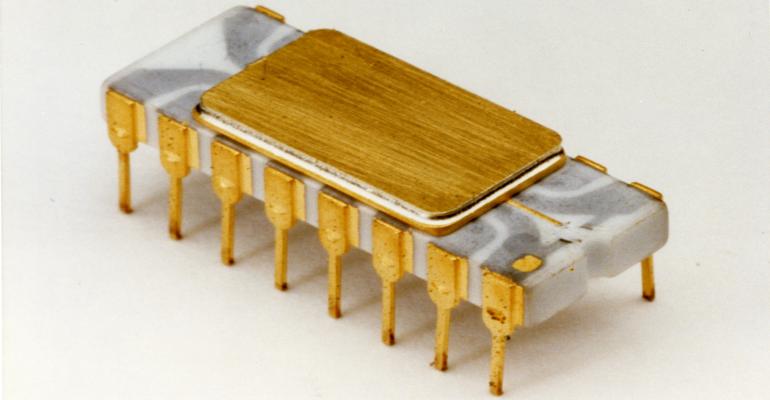 While pioneers like Fairchild Semiconductor were among the very earliest Silicon Valley companies, it was Intel, founded by Fairchild employees, that launched the California microprocessor industry to today’s state of utter ubiquity. This started 50 years ago with the release of the Intel 4004, which is regarded as the world’s first commercially available single-chip microprocessor.

These qualifiers are apparently necessary because of some easily overlooked and forgotten devices such as a microprocessor that was used in early F-14 fighter plane prototypes and an ungainly multi-chip processor system. It is commercial products that drive industries, and that was the case for the Intel 4004, although this groundbreaking chip got off to a slow start.

Related: Is Intel Losing its Memory and (Manufacturing) Mind?

Intel sort of backed into this market, developing the chip at the request of Japanese calculator company Nippon Calculating Machine Corporation for its new Busicom 141-PF printing calculator. In 1969, that company sought a cumbersome 12-chip solution for its desktop calculator. These chips would have their logic programming built into their physical architecture.

Intel engineer Ted Hoff proposed a four-chip alternative, including at its core the programmable 4004 microprocessor. Nippon Calculation Machine Corp. was dissatisfied with this result, so in 1971 Intel refunded the company’s $60,000 to reclaim rights to the 4004 design and offered it as a commercial product to other customers. Even then, it took time for the industry to comprehend the potential of programmable microprocessors.

“People were locked into the concept that a computer was a precious, multi-million-dollar piece of equipment,” recalled Hoff. “With this product, we changed people's perception of computers and the direction that the computing industry would go. We democratized the computer.”

“The 4004 was so revolutionary that it took about five years for Intel to educate engineers about how to build new products based on microprocessors,” said 4004 co-inventor Stan Mazor (along with Hoff and Federico Faggin). “Intel was ultimately very successful in this endeavor, and the rest is history.”

This wasn’t Intel’s first example of backing into a new invention. The company created the first integrated circuit somewhat accidentally, according to Intel founder Robert Noyce. “I say that the integrated circuit came out of my own laziness,” he joked.

In those early days, rather than carving out circuits from silicon wafers, semiconductor companies cut out individual transistors, Noyce explained. “We took those transistors that were all nicely arranged on a piece of silicon and cut them into tiny pieces. So then of course we’d ship them to a customer and they’d put them all right back together again. Why not just cut out all of that middle ground? Just put ‘em together while they’re still on the silicon. So that’s what we did.”

That compares to Intel’s latest technology, the 12th-Generation Intel Core processor family, which incorporates billions of transistors on a 1,700-pin socket package running at 5.2 GHz. It is made on 12-inch silicon wafers using 7-nanometer circuits.

And Nippon Calculation Machine Corp.? That company went out of business in 1974.