Inside the (Now) Lost Chamber at Arecibo 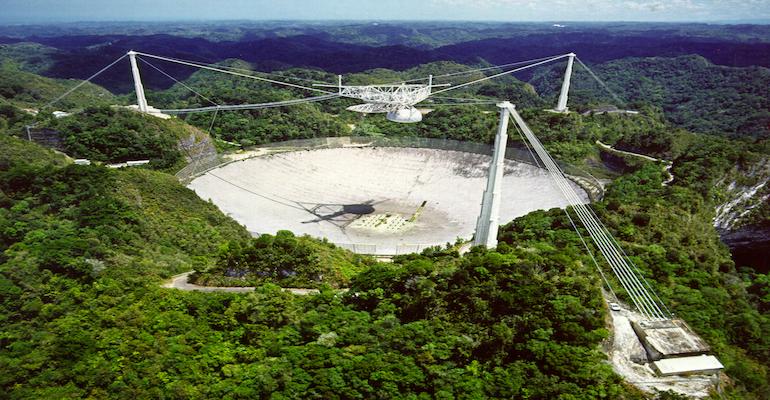 A decade-old video hints at what’s been lost with the collapse of the RF space transceiver platform at the Arecibo Observatory in Puerto Rico.

The platform chamber was full of electronics – some supercooled. It was suspended high above the lush tropical rain forest in the northwest corner of Puerto Rico. Since its construction in 1963, the telescope structure has served both realms of scientific discovery as well as science fiction including shows like the X-Files, James Bond, and others. After yesterday's collapse, though, its long heritage will be relegated to history.

According to a tweet from the National Science Foundation, the instrument platform of the 305m telescope at Arecibo Observatory fell overnight. No injuries were reported.

The instrument platform of the 305m telescope at Arecibo Observatory in Puerto Rico fell overnight. No injuries were reported. NSF is working with stakeholders to assess the situation. Our top priority is maintaining safety. NSF will release more details when they are confirmed. pic.twitter.com/Xjbb9hPUgD

Several pictures of the observatory have appeared on Twitter, showing that the 900-ton platform normally suspended above the observatory was no longer there. As it was suspended over the telescope’s giant 1,000-foot-wide dish, both the RF platform above and reflector dish below were destroyed.

A meteorologist in Puerto Rico, Deborah Martorell, tweeted early Tuesday: "Friends, it is with deep regret to inform you that the Arecibo Observatory platform has just collapsed."

Since that time, another cable failed. On November 19th, NSF engineers announced that the remaining cables at Arecibo were in danger of failing, which would likely cause the suspended platform to collapse. The agency decided to try to demolish the entire observatory in as safe and controlled a manner as possible. But last night, gravity and mechanical fatigue finished the job. Since the facility had been off-limits for some time now, there were no reported injuries after the collapse.

Sadly, no one will ever be able to again enjoy the visual beauty or even a tour of the suspended observatory. But ten years ago, I was fortunate to visit the platform as part of my editorial tour of the complex. The video below captures portions of the platform chamber and gives a sense of its position high above the rain forest floor.

If you’d like to urge the NSF to repair the Arecibo Observatory, please see the petition on Change.org.