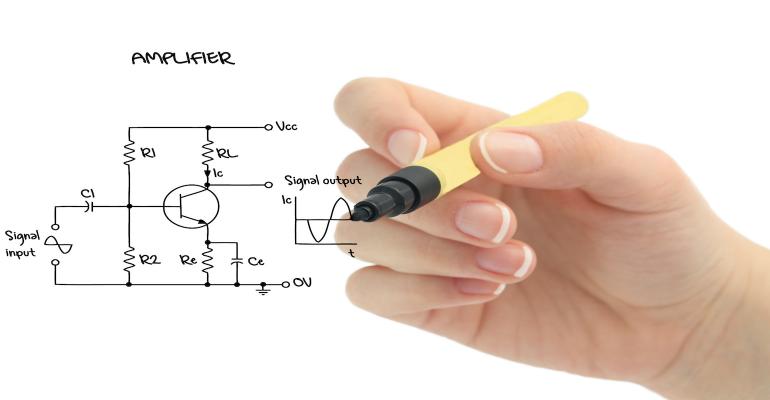 Differential instrumentation amplifiers are key for strain gauge load and pressure sensor measurements. But how do they work?

The most common device for the measurement of load, pressure, torque, and even piezo-resistive (low frequency) acceleration is the strain gauge transducer. As a transducer, which converts a measured analog quantity into an electrical signal, the strain gauge consists of a high-resistance, fine-wire, or thin-foil grid that is securely bonded to a specimen. When the specimen undergoes a stress, the resistance of the strain gauge is changed.

The transducer’s resistance varies in a known way with the applied force, namely, the resistance is directly proportional to how much strain the sensor is experiencing due to the force applied.  Typically, this variation in resistance is measured with a Wheatstone Bridge circuit, in which the strain gauge comprises one of the resistive paths in the bridge. In this arrangement, the quarter or one arm of the bridge formed by the strain gauge is the active gauge while the other arms are fixed value resistors or unstrained gauges.

Related: Basics of Thin Film – How Thick is Thin?

In an ideal case, the strain gauge is the only resistor in the circuit that varies and then only due to a change in strain on the surface of the specimen to which it is attached. The unknown strain gauge resistance Rx is to be measured; resistances R1, R2, and R3 are known, where R2 is adjustable if needed. (In the simplest circuit configuration, R2 is constant.) When the measured voltage VG is 0, both legs have equal voltage ratios: R2/R1 = Rx/R3 and Rx= R3R2/R1. (Image Source: By Rhdv, CC BY-SA 3.0, Wikimedia)

A Wheatstone bridge circuit configuration can be easily interfaced into a variety of combinations. The Wheatstone bridge is traditionally called ohmmeter as the results are measured in terms of resistance and also are accurate and precise.

Related: The Future Of Signal And Power Integrity Designs

The disadvantage of a Wheatstone bridge is that its precision decreases when measuring large resistances as such measurements tend to be non-linear. Also, the value of resistance of any amount can degrade depending on temperature and an applied electromagnetic field (EMF). The later variance can be easily demonstrated with an old-style flashcube camera that flashes upon a bare strain gauge. The flash causes an output from the strain gauge even though no physical strain has been applied.

Measuring a desired signal is one thing but making the transducer output suitable for input into a measurement system or IoT device is another. Signal conditioning is required to provide a useful output sign, which entails the following tasks:

-- Excitation of the sensor.

-- Calibration of the sensor so the output makes sense.

-- Amplification to get the signal where it needs to go.

-- Filtering to remove noise or other unwanted signal interferences.

(For this discussion, we’ll just focus on the amplification task.)

As with most transducers that measure analog, real-world phenomena, the output of a strain gauge within a Wheatstone bridge circuit is relatively small. Typically, most such strain gauge outputs are less than 10 mV/V or 10 millivolts of output per volt of excitation voltage. For these low voltage signals to be of value in a measurement system, they must be amplified to a higher level. If done properly, amplification will increase the measurement resolution, i.e., it increasing the Signal-to-Noise (S/N) ratio. Signal conditioning modules typically include configurable gain amplifiers with gains up to 2,000 for this purpose.

Millivolt range outputs are common with many transducers including strain gauges, thermocouples, and the like. Signal amplification is needed to bring the measured output to a level acceptable by the next stage of the instrumentation process, typically an analog-to-digital converter (ADC) or perhaps input into an FM commutator or digital PCM multiplier of a wired or wireless (sometimes telemetry) system.

Amplifiers for instrumentation often need differential signal cancellation, due to the low-level of the measurement signal and the ever-presence of unwanted noise signals. Noise can result in the distortion of the sensor signal that results in an unstable reading. It is important to minimized noise as much as possible throughout the entire measurement system.

In addition to careful grounding and appropriate filtering of all sensors and components, it is crucial to include a differential instrumentation amplifier. Such a signal conditioning device amplifies the difference between two input voltages but suppresses any voltage common to the two inputs – which is often the noise component. The amplifiers consist of two inputs and one output in which the output is ideally proportional to the difference between the two voltages.

Schematically, an instrumentation amplifier looks identical to a standard operational amplifier (op-amp) circuit. The difference is that the former is almost always internally composed of 3 op-amps. These are arranged so that there is one op-amp to buffer each input (+,−), and one to produce the desired differentiating output. It should be noted that an instrumentation amplifier can also be built with two op-amps to save on cost, but the gain must be higher than two (+6 dB). (Image Source: By Inductiveload, Public Domain, Wikimedia)

Among these features, one stands out in regard to noise reduction: common-mode rejection ratio (CMRR). This metric is used to quantify the capability of the amplifier to reject common-mode signals, i.e., those that appear simultaneously and in-phase on both inputs. A high CMRR is required when a differential signal must be amplified in the presence of a possibly large common-mode input, such as strong electromagnetic interference (EMI) from the presence of an EMF. Mathematically, CMRR is expressed as follows: CMRR=20 log (differential gain/common mode range)

Additional signal conditioning features for instrumentation amplifiers include AC and DC voltage inputs and integral filters that allow some signals to pass while blocking others.