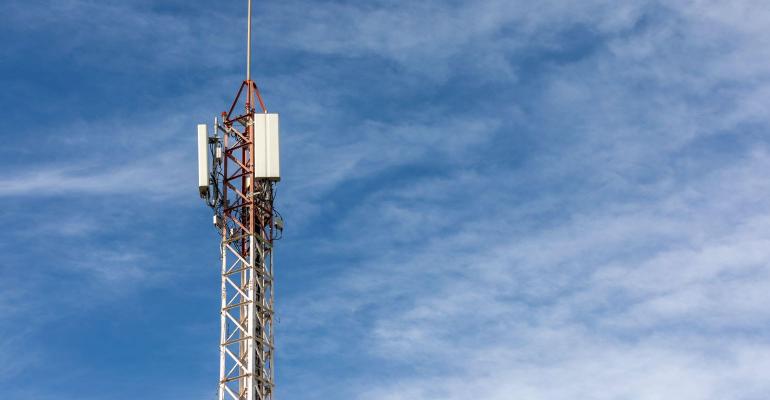 Radiofrequency waves from mobile phone powers could provide a low-power energy source using antennas comprised of metamaterials.
Energy harvesting from radiofrequency waves is being investigated by scientists from the University of South Florida, using metamaterials designed to capture low-intensity RF waves similar in intensity to those emitted from cell phone towers.

Energy harvesting is getting a lot of attention as new methods are sought to harness electricity. One technology involves an increasingly familiar source: radiofrequency waves.

University of South Florida researchers are trying to extract energy from radiofrequency waves using synthetic composite materials called metamaterials, materials whose structures exhibit properties not usually found in natural materials and designed to achieve higher levels of performance. Metamaterials have been the subject of many research efforts, including solving equations.

The metamaterials-based antenna developed at the University of South Florida scan potentially draws 100 microwatts of power from radio waves, with a radio wave intensity of just 0.4 microwatts per centimeter squared. The intensity level is approximately the same intensity as the radio waves 100 meters from a cell phone tower, according to the researchers.

“By eliminating wired connections and batteries, these antennas could help reduce costs, improve reliability and make some electrical systems more efficient,” said research team leader Jiangfeng Zhou. “This would be useful for powering smart home sensors such as those used for temperature, lighting and motion or sensors used to monitor the structure of buildings or bridges, where replacing a battery might be difficult or impossible.”

Related: Will 5G Technology Users Really be Able to Seize Useful Power From the Airways?

The concept of using metamaterials to harness energy is not new. For instance, researchers at the University of Nottingham England demonstrated several metamaterial antennas operating at frequencies as high as 5.8 GHz, according to a paper published in 2019. Zhou told Design News that the hurdle has been drawing sufficient energy from the metamaterial without having to resort to higher levels of radio wave intensity, which may not always be feasible from a conventional cellular tower.

Zhou and other researchers reported that the metamaterial comprising the antenna allows a higher voltage to flow across the device’s diode. This in turn enables the antenna to exhibit radio wave absorption levels that are designed to efficiently work with the radio wave intensity levels typical from a cellular tower.

The scientists tested their metamaterial-based antenna in an anechoic chamber. The radio wave was sent out from a horn antenna received by the metasurface antenna mounted in a wood frame. 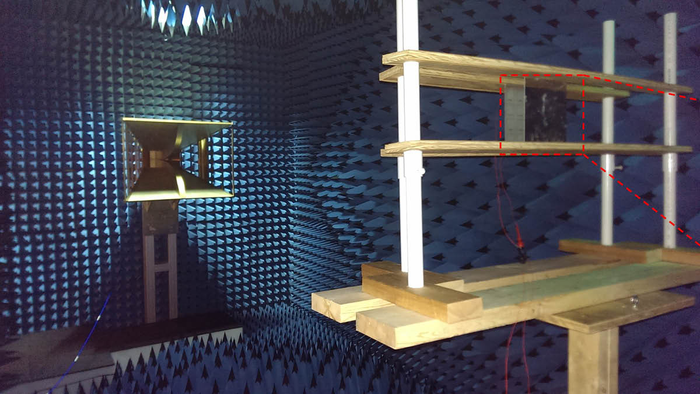 University of South Florida researchers tested their metamaterial-based antenna in an anechoic chamber, sending out the radio wave from the horn antenna on the left. The signal is received by the metasurface antenna mounted on the wood frame on the right.

The researchers will need to decrease the size of the metamaterial antenna to make it practical for use. Zhou said that the current 15 cm squared size of the antenna is larger than the size of devices that could potentially be powered. But shrinking the antenna poses additional challenges.

“Decreasing the size of the antenna will reduce the amount of energy harvested,” Zhou said. You want to increase the effective area of the antenna that can be used to draw radio wave energy.”

The researchers would like to adopt the technology enabling a radio wave source to power or charge devices around a room. They also hope to be able to design an antenna capable of collecting energy from multiple types of radio waves simultaneously, allowing more energy to be harvested.

Spencer Chin is a senior editor with Design News.