HomeElectronicsConsidering the Value of an SPI-to-LIN Bridge in Cars
Recent
Electronics
The Internet's Grooviest Slideshow of Legendary International Scouts
May 17, 2022
Electronics Industry Bolsters Root of Trust Security Efforts
May 17, 2022
3 Tips for Embedded Software Configuration Management
May 17, 2022
Novel 3D Printing Method Used to Replenish Coral Reefs
May 16, 2022
POLL
Volkswagen’s Electric Successor to the International Scout 4x4
May 16, 2022
The Music Is Over For Apple's iPod
May 16, 2022
Q&A With IndyCar Gearbox Expert Anna Chatten
May 13, 2022
Intel Unveils Trust Authority to Boost Security
May 13, 2022

Considering the Value of an SPI-to-LIN Bridge in Cars 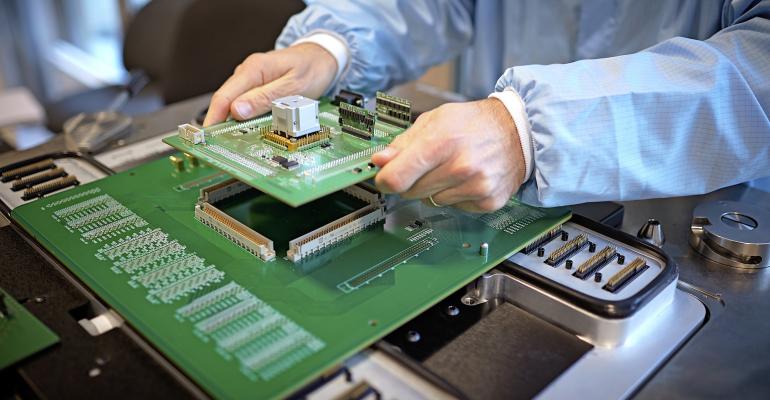 Local Interconnect Network (LIN) automotive bus systems are mainly placed in the body domain and we experience a constantly increasing number of nodes in the car. This article introduces the concept of a Serial Peripheral Interface (SPI)-to-Multiple-LIN bridge that will significantly change the way how LIN automotive bus systems will be connected to the microcontroller of the electronic control units (ECU) in the car.

The SPI-to-LIN-bridge concept allows the host microcontroller unit (MCU) to be fully tailored to the application performance requirements. Besides significantly reducing the bill of materials (BOM) and board space consumption, this concept also greatly enhances the flexibility and scalability of multi LIN master channel architectures.

We conclude with an example of a multi-channel LIN master application with SPI-to-LIN bridge, based on NXP’s SJA1124. The SJA1124 is a LIN transceiver incorporating four LIN master channels, each with an integrated master controller and master termination. By integrating the master termination along with the master controller, bill-of-material (BOM) and board space are clearly reduced.

More and more applications have multiple LIN master channels. Moreover, the number of LIN channels per application is also increasing, whereas the available space for these applications is typically shrinking.

In this paper, SPI-to-LIN bridge-based solutions for multi-channel LIN applications are described. It explains how board space and BOM are reduced and how the scalability and flexibility of the application architecture and MCU variety are enhanced.

There is a wide range of integrated MCU features supporting LIN applications, varying from a simple UART to a full-featured LIN controller. The number of integrated LIN channels also ranges from a few to many, but typically depends on the MCU performance platform.

For each LIN channel, at least two pins are required, which are the pins TXD and RXD. In addition, one or more mode control pins might be necessary to switch the LIN transceiver mode from low power mode to normal mode and vice versa.

Thus, for applications with multiple LIN master channels, the number of necessary pins accumulates with at least a factor of two. For instance, for 8 LIN channels 16+ pins are required. The example in Figure 1 illustrates the necessary MCU pin count for two quad LIN transceivers, connected in the traditional way with pairs of TXD and RXD per LIN Channel. 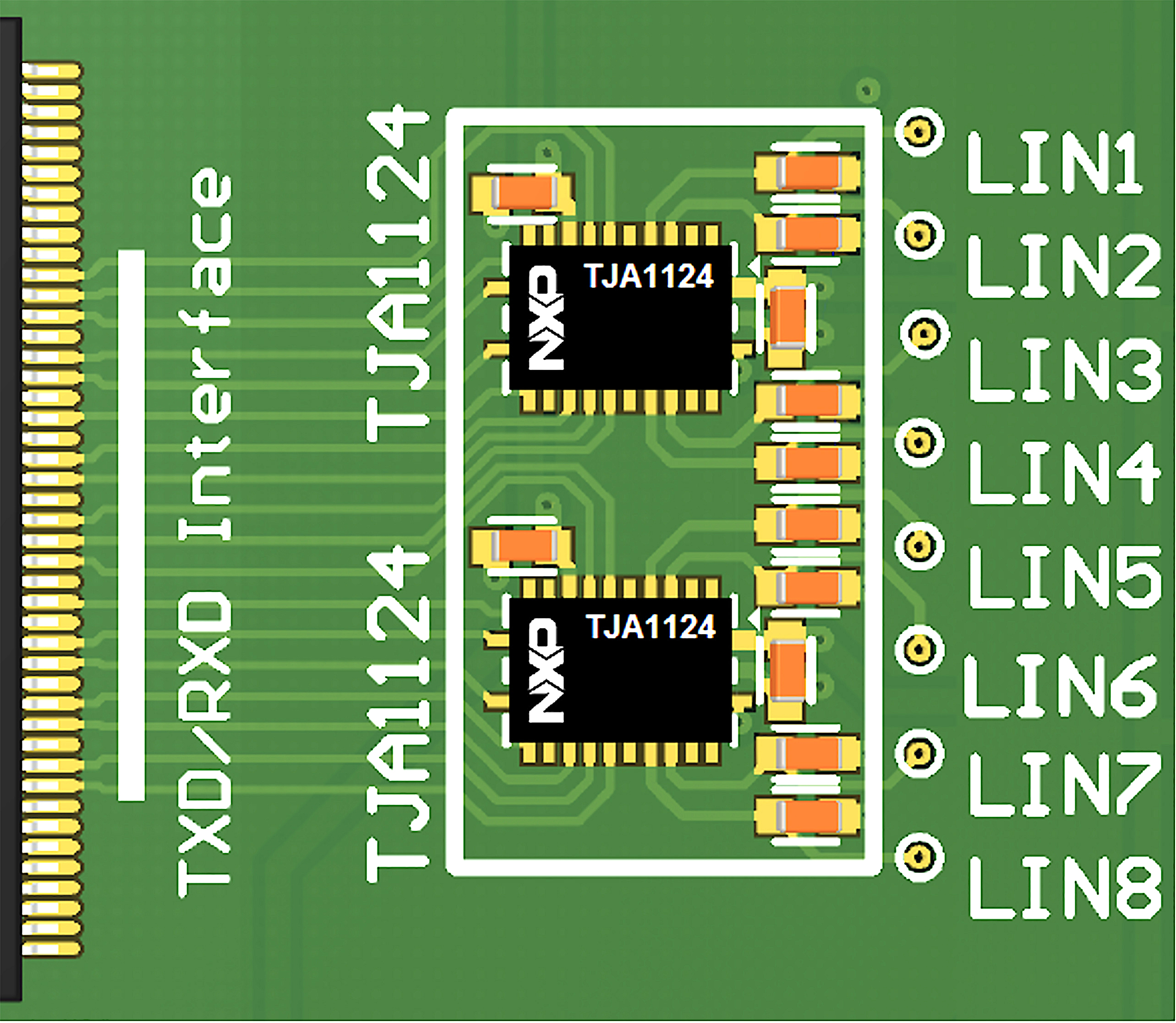 If the MCU pin count is already critical, the high number of pins required for multiple LIN master channels might force the selection of the next higher and more expensive MCU family variant with more pins, if available – what is not always the case. This leads to a significant increase in the BOM and, herewith, costs.

Furthermore, the higher the required number of integrated UART/LIN controllers, the smaller the range of available MCU families. Worst case, no MCU variant with sufficient UART/LIN controllers is available within the preferred MCU family. Potentially, even a changeover to a new MCU architecture might be unavoidable. This basically means that the number of LIN channels is driving the MCU choice, instead of the required performance.

Flexibility and scalability through SPI interface

Such a LIN device, with on one side an SPI and on the other side a LIN bus interface, is called an ‘SPI-to-LIN bridge’.

As an SPI-to-LIN bridge decouples the MCU selection from the LIN channel count, the required MCU performance becomes the primary selection criterion, rather than the number of LIN communication channels that need to be handled. Thus, this widens significantly the range of suitable and available MCUs. 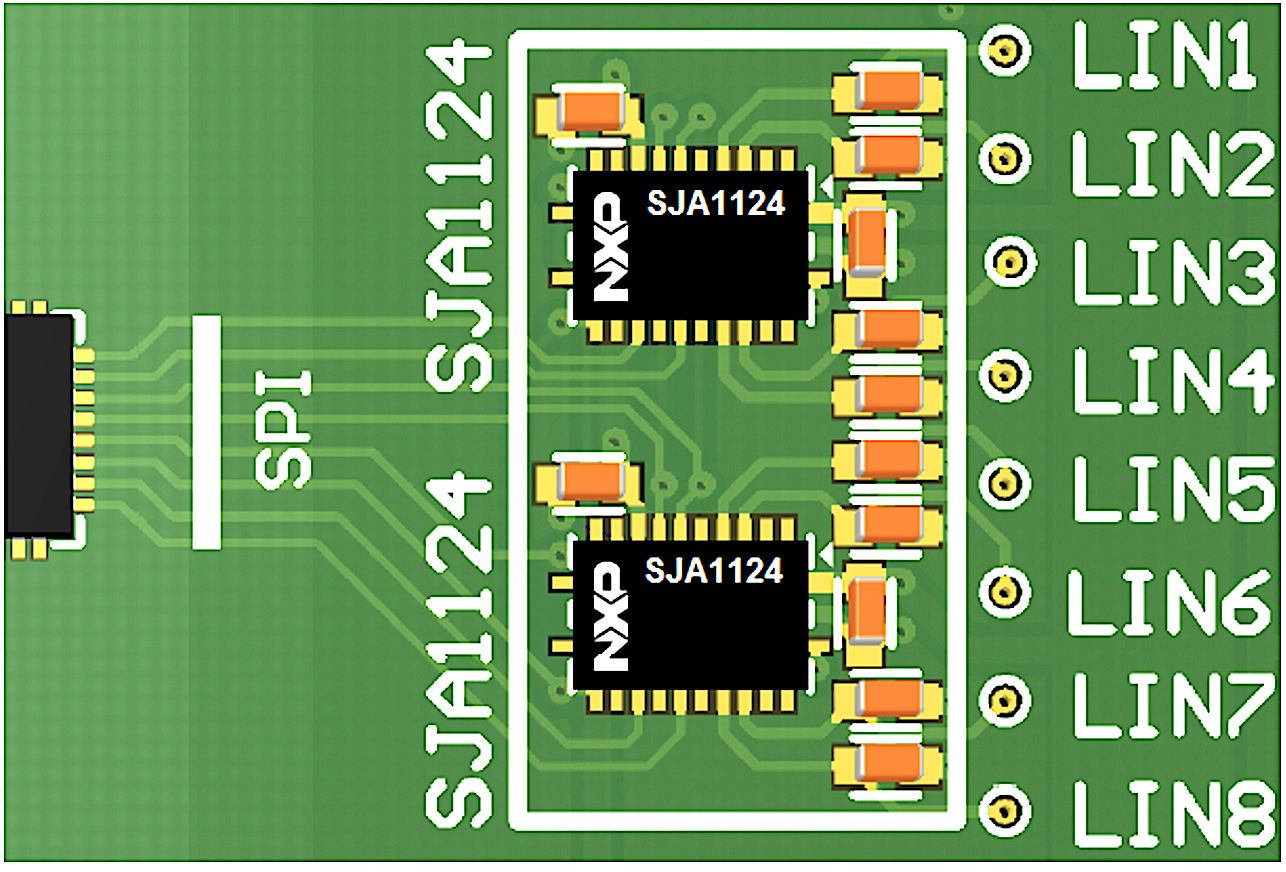 With SPI, the required number of MCU interface pins becomes almost independent from the number of LIN channels. This pays off the most for higher numbers of LIN channels. For instance, an SPI-to-LIN bridge with four integrated LIN channels would require 1 additional MCU chip select pin for scaling up from four to eight LIN master channels. Figure 2 illustrates an MCU pin count example with two SPI-to-QuadLIN bridges.

Depending on the computational footprint of the application, this opens up the use of smaller, mainstream low-pin-count MCUs.

Furthermore, an SPI-to-LIN bridge enables upgrading of legacy applications with additional LIN channels, despite the applied MCU does not provide the extra required UART/LIN controllers. 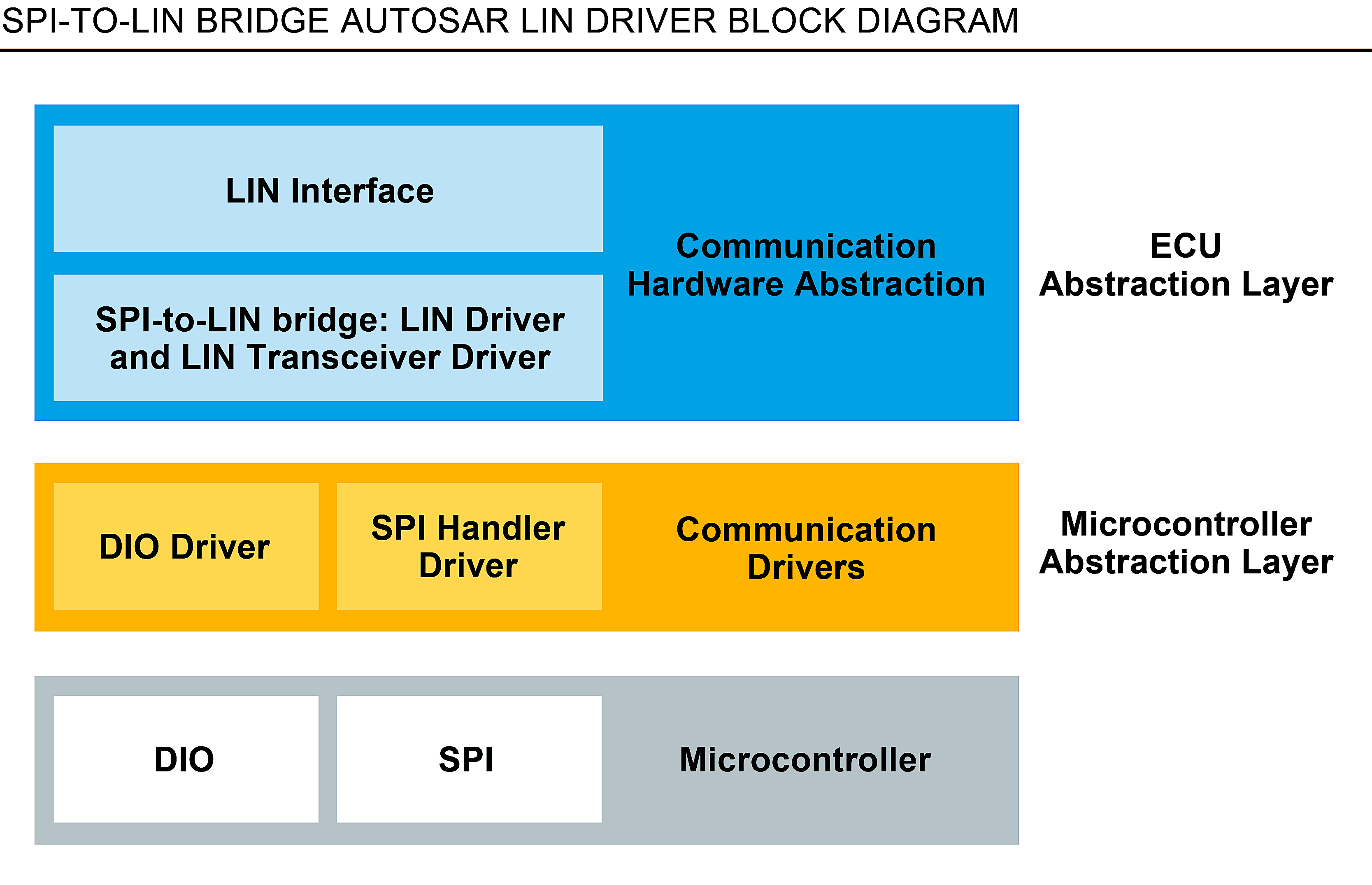 As illustrated in Figure 3, both, LIN Transceiver Driver and LIN Driver are located between AUTOSAR LIN Interface and SPI Handler / Driver. As such, it can be either part of the AUTOSAR ECU Abstraction Layer software from a software vendor or an add-on to AUTOSAR Microcontroller Abstraction Layer (MCAL) packages from a microcontroller vendor. This enables fast reuse of the LIN software driver for different MCU implementations.

The use of an SPI as an MCU interface for multiple LIN channels consequently sets the focus on the SPI performance, because it becomes the bottleneck for the LIN data flow. The SPI runtime is the limiting factor for the data throughput. Therefore, it is also limiting the maximum number of LIN channels, which can be adequately served by one SPI.

Board space more and more under pressure

A conventional LIN master termination is built-up with discrete parts, such as 1 or 2 pull-up resistors and 1 diode. This means that max. 3 discrete parts per LIN master channel are needed, as highlighted in Figure 4. 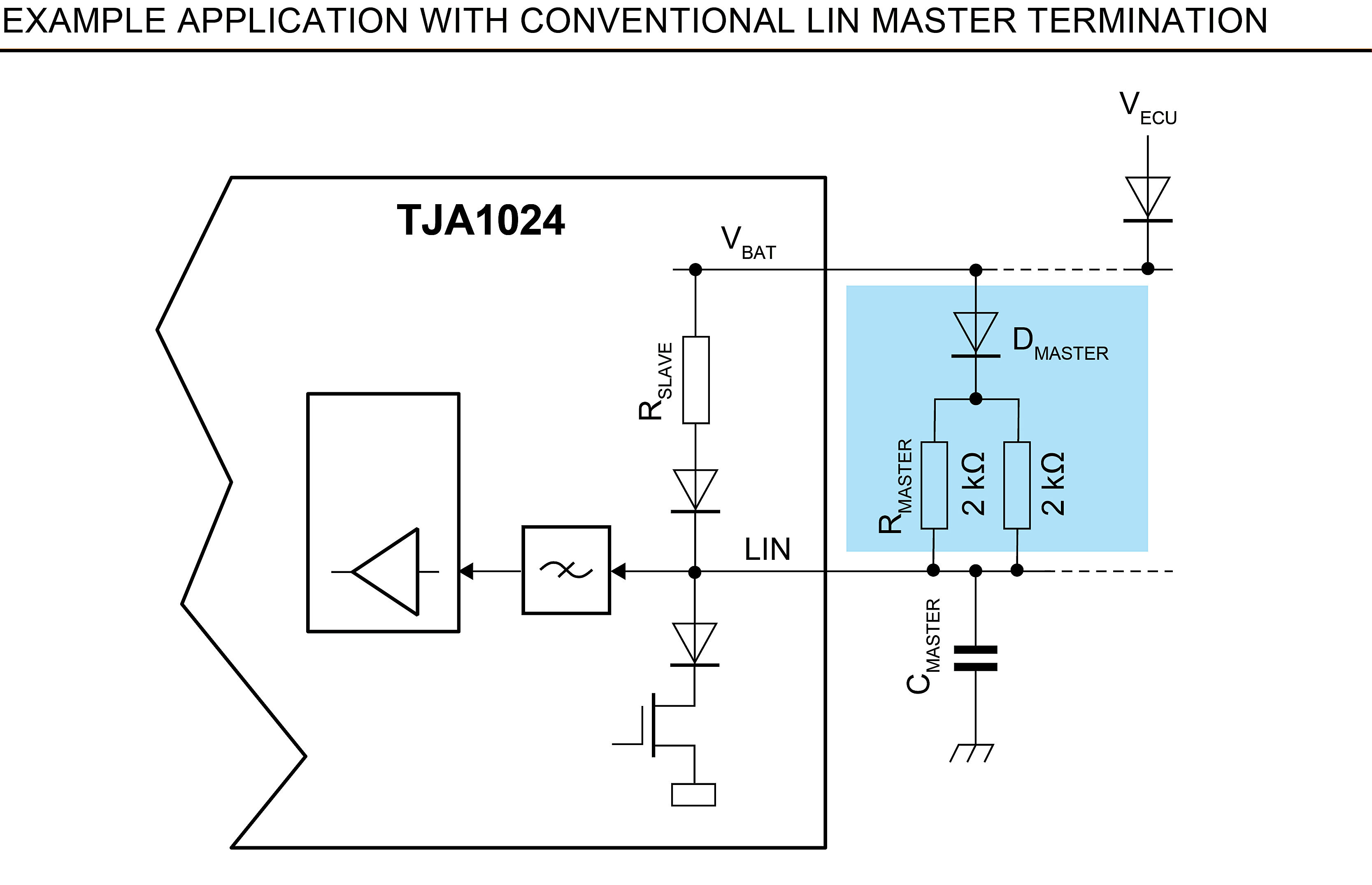 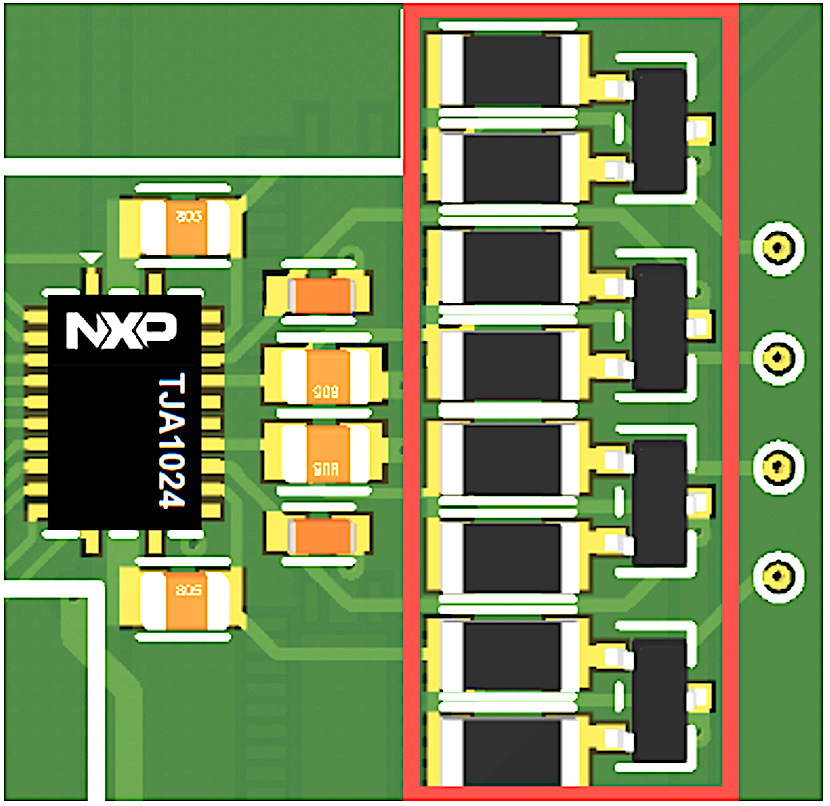 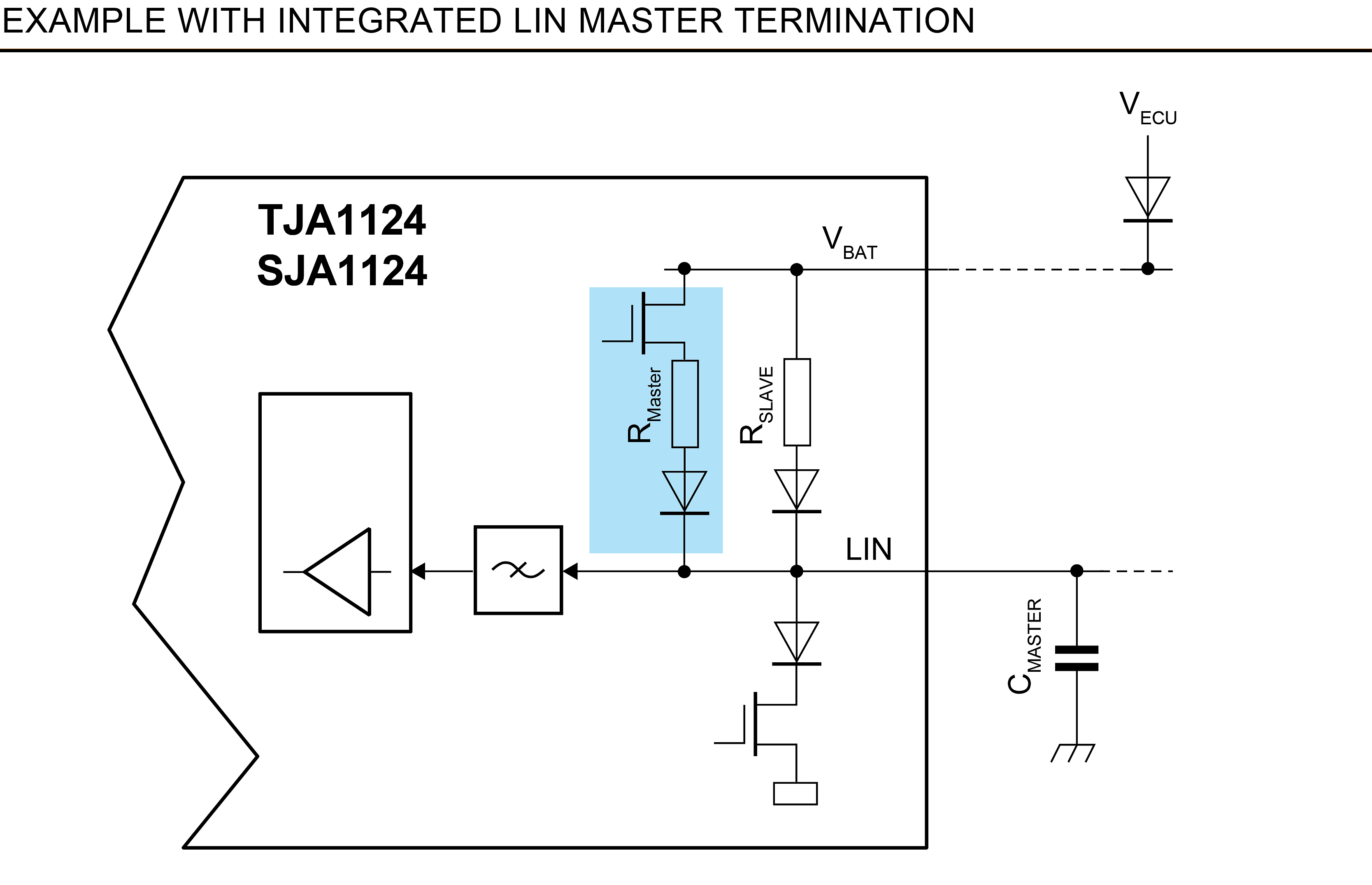 With having integrated the LIN master termination, the LIN-related board space for applications with several LIN master channels (e.g. 4 LIN channels) depends mainly on the number of LIN channels per LIN transceiver and the device package outline. Here, a leadless package with an exposed pad combines small size with a good thermal connection to the board.  Figure 7 shows the board space consumed by a quad LIN transceiver with integrated LIN master termination. 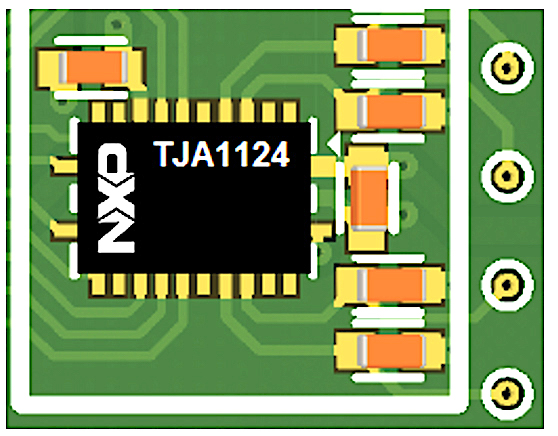 An SPI-to-LIN bridge device is available from NXP. The SJA1124 [1] is an SPI-to-Quad-LIN bridge device incorporating 4 LIN channels. Each LIN master channel contains a LIN controller and LIN transceiver with master termination. LIN data communication is accomplished via SPI. The SJA1124 converts the transmit data stream received on the SPI input into LIN master frames on the LIN bus. The data stream received on the LIN bus can be read via SPI. A complete LIN frame can be transmitted in one single SPI operation.

As shown in the example in Figure 8, 8 LIN channels can be built up with two SJA1124 devices. In this configuration, 5 MCU pins are needed for the SPI communication (clock, data in, data out, chip select 1, and chip select 2). The on-chip baud rate generator in the LIN controllers requires a reference clock signal. For detection of interrupt events, one shared external interrupt MCU input or two dedicated external interrupt MCU inputs can be optionally connected to the interrupt output of the SJA1124, respectively. 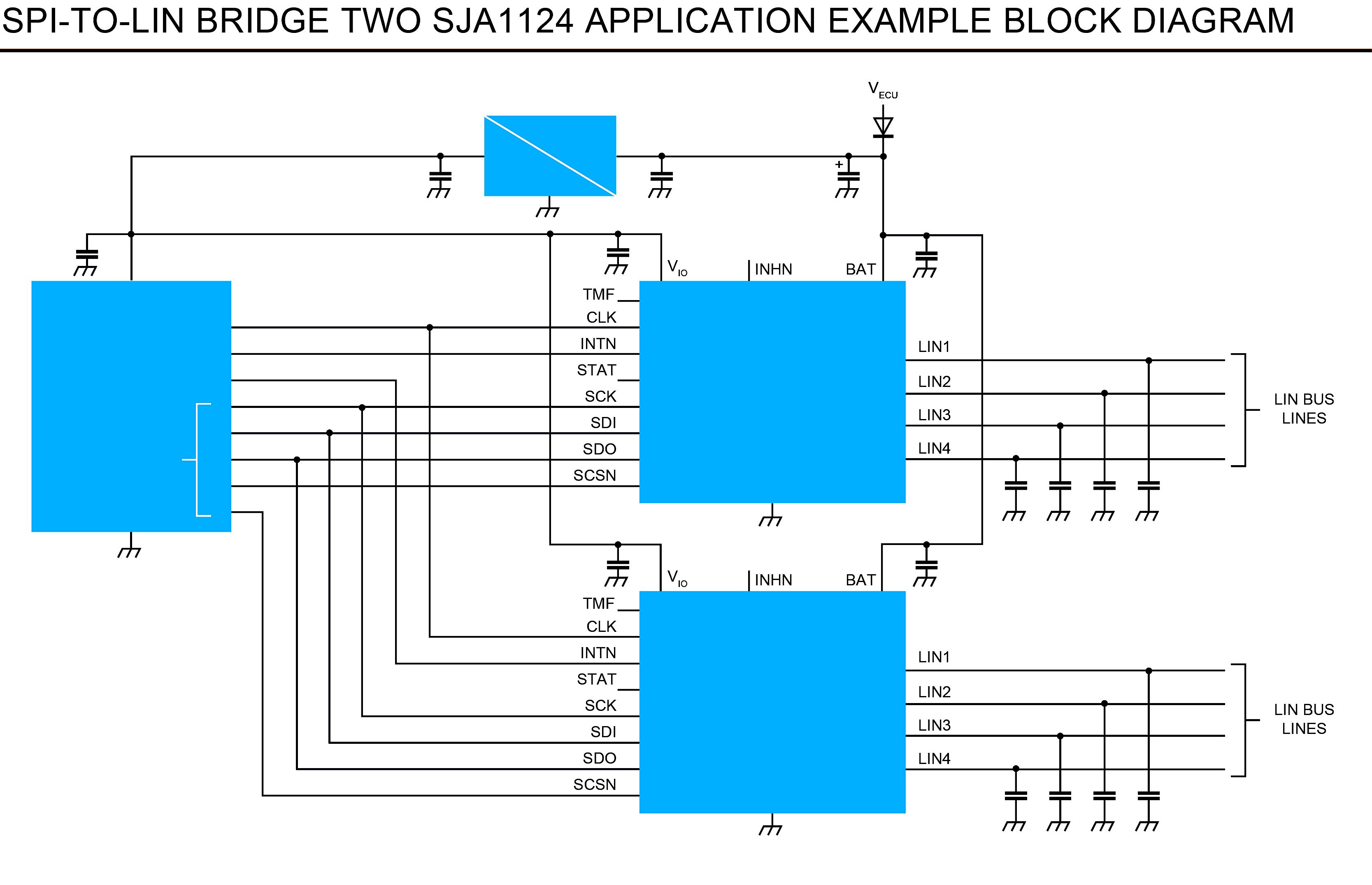 Due to the SPI data transfer and the integrated LIN master termination of the SJA1124, the BOM and board space can be significantly downsized. Moreover, the range of suitable MCUs is considerably wider.

With the introduction of an SPI-to-LIN bridge with integrated LIN master termination, the BOM, board space, and costs for multi-channel LIN applications are significantly reduced:

Decoupling the MCU from the LIN interface, by moving the LIN controller out of the MCU, offers unprecedented flexibility:

Thus, an SPI-to-LIN bridge like NXP’s SJA1124 is the perfect companion device for MCUs to handle a high number of LIN master channels, offering unprecedented cost and board space savings in multi-channel LIN applications.

Rainer Evers, Principal System Engineer, NXP Semiconductors, is a system engineer with more than 20 years of experience in the semiconductor industry. Throughout his professional career, at NXP Semiconductors and prior at Philips Semiconductors, he focused on automotive CAN, LIN, and Ethernet transceivers. In his role, he is responsible for transceiver product definition and represents NXP as an expert in LIN standardization in ISO and SAE.