Chip Cools Other Hot Running Chips to Maximize Their Performance 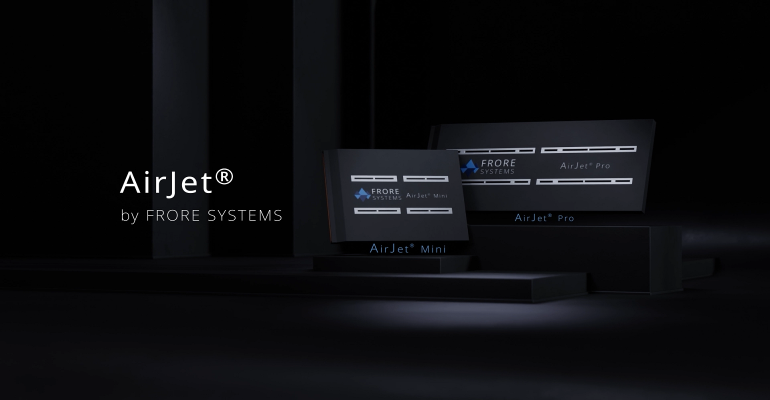 Frore Systems has created two chips, the AirJet Mini and AirJet Pro, that use patented technology to effectively remove heat from hot running processors and enable them to run at higher speeds. The chips can reduce or eliminate the need for fans and other thermal devices.
Patented piezoelectric device uses jet impingement to achieve effective cooling on pc boards and eliminate need for fans, heat sinks.

The idea of using a semiconductor to cool other hot-running semiconductors might at first sound counterintuitive, but this device is no ordinary chip. Frore, a recent startup company, has unveiled a solid-state chip for active device cooling.

Today’s PCs and other electronics devices face an age-old problem: controlling heat from processors that run hotter as their speeds increase. Existing solutions, such as mechanical fans, are inadequate. Thus, manufacturers have designed fail-safe functionality that prevents overheating by slowing down the processor after only a few seconds of operation.  This means consumers never really get the full processor performance they pay for.

Enter Frore Systems. With the help of $100 million in funding from leading investors including Mayfield, Addition, Clear Ventures and Qualcomm Ventures, the company, based in San Jose, Calif., has spent the last four years developing the AirJet Chip to combat the heat issue.

The chip utilizes a patented multi-physics design that converges structural, fluidic, acoustic, and electrical resonance. It uses the principles of jet air impingement, which is utilized in cooling large jet engines to remove localized heat from processors, according to Dr. Seshu Madhavapeddy, founder and CEO of Frore Systems. To help achieve this, the chip is constructed with a vibrating ultrasonic membrane that relies on the piezoelectric effect to generate airflow.

“The vibrating membrane create a huge suction force that draws in ambient air through intake slots and moves hot air out side exhausts,” Madhavapeddy said.

Frore conducted case studies with the chip on two notebooks, one an ARM-based notebook with a 13-in. screen and measuring 11 mm thick, the other An X86 processor-based 12-mm thick notebook with a 15-in. screen. According to the company, the ARM-based notebook was able to achieve twice the processor performance using four of AirJet Mini chips, while the X86 notebook saw a 1.5 X improvement in processor performance using three AirJet Pro chips.

Acccording to Madhavapeddy, the AirJet chips can either be mounted next to the processor or even atop it, depending on design needs.

To build the chips, Frore Systems has built a fab in Taiwan that will borrow technology and process techniques from display, aerospace, and automotive manufacturing. The company has started shipping samples of the AirJet Mini, and will begin shipping the AirJet Pro the first quarter of 2023.