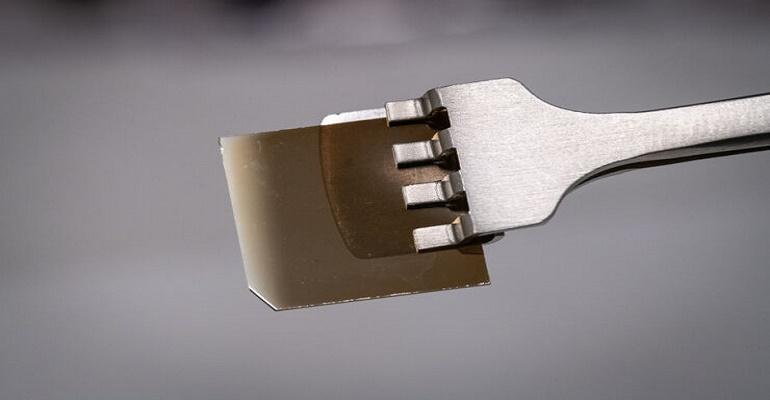 Researchers have been seeking new materials in electronics, but have sometimes run into roadblocks because materials that can perform better than those currently used often aren’t easy to manufacture.

Indium nitride is one of those materials. Researchers believe the material can be used in next-generation high-frequency electronics, which can enable the use of new frequencies for wireless data transfer. However, it is difficult to produce in the thin-film form that electronic applications often use.

Now researchers in the Department of Physics, Chemistry, and Biology at Sweden’s Linkoping University have developed a new chemical molecule that they believe can facilitate the manufacture of indium nitride, paving the way for its use in electronic applications.

Indium nitride is a semiconductor material comprised of nitrogen and the metal indium. Its semiconducting properties mean it can be used in transistors, the foundational material of all electronic devices.

Electrons also move through indium nitride extremely easily, it is possible to send electrons backward and forwards through the material at very high speeds, said Henrik Pedersen, professor of inorganic chemistry at Linkoping University. This is why scientists are eyeing it for use in new wireless frequencies to transfer data—if they can find a way to produce it efficiently using current manufacturing capabilities, that is.

Currently, vapor deposition is the established way to create thin films of semiconductor materials This process requires temperatures between 800 and 1,000 degrees Celsius; however, iridium nitride breaks down into its separate elements—iridium and nitride—when heated about 600 degrees Celsius.

To solve this problem, researchers used a companion of this type of process called atomic layer deposition (ALD), which uses lower temperatures, as well as developed a new molecule, indium triazenide, which they discovered to be a good fit as a foundational material for thin films.

While most materials used in electronics must be produced by allowing a thin film to grow on a surface that controls the crystal structure of the electronic material—which is known as epitaxial growth—indium nitride is different. Pedersen’s team discovered that they can achieve epitaxial growth of indium nitride if silicon carbide is used as a substrate, which was surprising to them and produced an extremely pure version of the material.

Another surprise to the team was a deviation on the accepted belief that in the ALD process, molecules should not be allowed to react or be broken down in any way in the gas phase. However, researchers found that when they changed the temperature of the coating process, they discovered that there is not just one, but two, temperatures at which the process was stable.

“The indium triazenide breaks down into smaller fragments in the gas phase, and this improves the ALD process,” Pedersen said in a press statement. “This is a paradigm shift within ALD—using molecules that are not fully stable in the gas phase. We show that we can obtain a better final result if we allow the new molecule to break down to a certain extent in the gas phase.”

Researchers published a paper on their work in the journal Chemistry of Materials.

The team plans to continue their work by investigating the interaction of similar triazenide molecules with other metals than indium, already achieving promising results when using these to produce molecules for ALD.