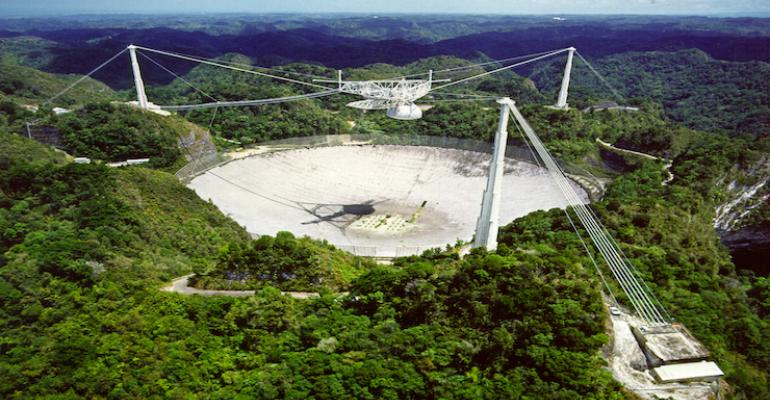 The investigation into why the cable broke is ongoing at this well-known RF telescope in the remote jungles of Puerto Rico.

A few weeks ago, the massive RF telescope dish at the Arecibo Observatory in Puerto Rico halted its operations into deep space after a structural cable failed. The cable punched a hole into the giant reflector disk. According to a press release from the University of Central Florida (UCF) – the current managers of the observatory – stated that the cable caused, “a 100-foot-long gash on the telescope’s reflector dish. Operations at the observatory are stopped until repairs can be made.”

Operators noted that the overall facility was fine but just why the cable broke is still under investigation. It’s not believed that the age of the cable was an issue.

The UCF release explained that “the facility is home to one of the most powerful telescopes on the planet, is used by scientists around the world to conduct research in the areas of atmospheric sciences, planetary sciences, radio astronomy, and radar astronomy. Arecibo is also home to a team that runs the Planetary Radar Project supported by NASA’s Near-Earth Object Observations Program in NASA’s Planetary Defense Coordination Office through a grant awarded to UCF.”

During its 50+ year history, the Arecibo RF Telescope has contributed to significant breakthroughs in space research in the study of gravitational waves, asteroid characterization, planetary exploration, and tracking unknown signals from the deepest parts of space.

Most people know of the observatory’s enormous dish from movies such as Contact, Goldeneye, and the X-Files. This is hardly surprising as the iconic RF radio observatory has all of the key ingredients for a high-tech adventure movie. First, its location is remote, as it’s buried deep within the rainforest of a Caribbean island. Second, the sheer size of the radio telescope renders it sublime. It measures 305 m (1001 ft.) in diameter and more than 500 m from the jungle floor to the top of the moveable radio receiver/feed platform. Unlike other astronomic R&D facilities in the United States, the observatory at Arecibo also is more than just a radio telescope. It also is a complete R&D facility. Its mission – in part – is to search for the stuff of science fiction stories ranging from extraterrestrials and gravity waves to asteroids that could devastate the Earth.

The technology inside the facility is equally impressive. But to appreciate it, one must first understand the mission of the RF observatory. Radio astronomy studies celestial objects using radio transmissions. Often traveling great distances, these radio waves are reflected from the objects under study. The returning signal is analyzed and developed into amazing images. Although this may seem like a straightforward task, the returning signal is typically so weak as to be almost indiscernible from the cosmic noise.

Thus, the successful detection of the returning signal requires the very best that modern electronics have to offer. Indeed, the noise generated by even the most modern low-noise amplifier (LNA) and other sources are orders of magnitude greater than the signals being examined. It has been estimated that the return signals may be over 40 dB below the overall system noise level—a factor of 10,000 lower!

Noise Reduction Critical
Simply put, everything that can be done is done to maximize the sensitivity of the receivers. The front-end electronics are cytogenetically cooled in 99.99% pure Helium to between 10 and 15 Kelvin. These temperatures can only be achieved in a vacuum. As a result, all of the specially designed electronic systems must be evacuated before the cooling can begin.

The front-end electronic systems consist of amplifiers, filters, and mixers. The amplifiers are specifically designed to minimize noise. One way to improve the sensitivity of the receivers is by replacing any existing gallium-arsenide (GaAs) monolithic microwave integrated circuits (MMICs) with indium-phosphide (InP). MMICs are devices that operate at microwave frequencies between 300 MHz and 300 GHz.

InP-based amplifiers have lower noise and higher gain than their GaAs counterparts. Yet these circuits also must be customized for the lowest noise possible. Back in 2008, The Cornell University-based team (then the managers of the observatory) collaborated with the experts at CalTech’s JPL team to make these customized application-specific integrated circuits (ASICs) tailored to a cryogenic environment. The CalTech design also has been implemented at the Allen Telescope Array (ATA) in California. ATA is a “large number of small dishes” (LNSD) array that’s designed to be highly effective for simultaneous surveys of conventional radio-astronomy projects and Search for Extraterrestrial Intelligence (SETI) observations at centimeter wavelengths.

Reducing the noise sensitivity of the receiving electronics is critical to analyzing the radio signals returning from deep space. But another challenge exists closer to home— namely, the effective “noise” created by wireless devices ranging from cell phones to data devices. The RF telescope operates to 10 GHz and includes receivers in the S-, C-, and X-bands. Wi-Fi technology occupies a relatively small bandwidth centered around 2.4 GHz—right in the middle of the lower S-band space. Another source of radio interference comes from a much more powerful source—namely, the various airports on the island. These sources are mission-critical and cannot be turned off at select times during the day.

To help reduce the opportunities for radio noise interference, the Arecibo team actively works with the Puerto Rico Spectrum users’ group. In cases involving mission-critical systems like airport radar, the team has coordinated the on-off time of the radar. The airport radar goes blank for a short period of time when it points in the direction of the Arecibo observatory. Unfortunately, this well-intentioned gesture has proven to be of limited value. The radar signal has more power located in the back lobes of the radar signature than in the front lobes.

On a personal note, I was allowed to tour the Arecibo Observatory in 2008. It was a fascinating experience that I’ll always remember, especially the ride on a narrow bridge across the enormous dish to the large receiver station hanging above the dish. Since the dish is a spherical reflector and not a parabolic one, the receiver is free to move across the dish to intercept signals reflected from the spherical dish surface.