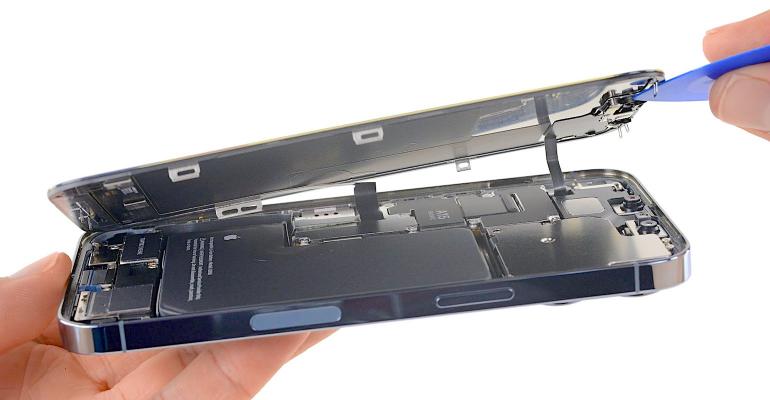 iFixIt opens the Apple iPhone 13 Pro to learn the secrets inside.
Apple continues to slim its phones by combining multiple components into one part in the iPhone 13.

The pros at iFixIt have pried apart Apple’s latest-model phone to learn its secrets, and it seems that the theme of the Apple iPhone 13 Pro is one of parts consolidation from the previous generation.

And those components are impressive from the specs alone. Consider the parts list that includes:

Packing all these goodies into a slim phone is the challenge, so iFixIt experts pried off the iPhone 13 Pro’s display to see how Apple’s engineers did it. Once the lid was off, the technician was surprised to see how clearly labeled all the parts are, as if Apple had anticipated this phone’s starring role in the video!

We can also see that the digitizer and display cables have been combined and that the upper sensor cable is very thin and short.

There was concern that Apple might have made the iPhone 13 Pro’s 11.97 Wh battery non-replaceable, but the iFixIt teardown confirmed that it can still be swapped as on other models.

What will not be replaceable, at least not by anyone other than Apple’s own authorized repair people, is the front-facing camera with its Face ID hardware. Because this is related to the security of what’s in the phone, the part is apparently serial-locked to the phone, and removing it disables Face ID.

The camera array is also another example of component integration on the iPhone 13 Pro, as Apple has integrated the flood illuminator into it along with the dot projector.

For all the real details, watch the video and check out iFixIt’s complete breakdown of the teardown job on their site.