HomeElectronicsWhy Engineers Need to Pay More Attention to Fonts
Recent
Electronics
Mercedes-Benz Sustaineer Concept Electric Van Scrubs the Air While it Drives
Oct 28, 2021
Spooky Halloween Tech Is Here. Just Look at These Doozies
Oct 27, 2021
Halloween? What a Perfect Time to Think About Generating Electricity From Blood!
Oct 27, 2021
Ghosts of Medtech: What Ever Happened to These 7 Medical Devices?
Oct 27, 2021
POLL
How to Survive a Zombie Apocalypse
Oct 27, 2021
America's Supply Chain Crisis by the Numbers
Oct 27, 2021
Want Scary Stuff for Halloween? Check out the Tech for 2021
Oct 27, 2021
How Apple Influenced Medical Packaging
Oct 27, 2021

Why Engineers Need to Pay More Attention to Fonts 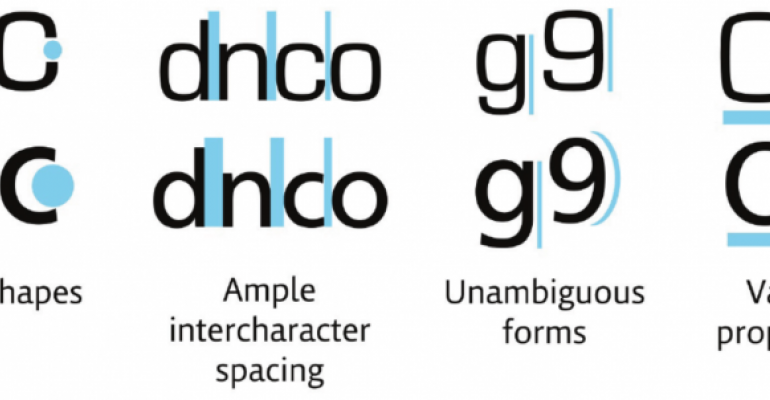 Fonts and typefaces aren't just for artists and designers. As mobile computing and technologies like connected cars, AR, and VR continue to grow, engineers will find themselves paying more and more attention to fonts.

Remember two spaces after the period? A lot of people once took this as a hard and fast grammatical rule. In reality it had nothing to do with grammar and everything to do with engineering.

For obvious mechanical reasons, old typewriters were designed with only one font (we call it Courier today). The block fonts used in typewriters didn't have the best spacing so typists would put a second space after every period in order to increase readability. Now that we have PCs and a plethora of well-designed fonts to choose from, two spaces are no longer necessary.

But that doesn't mean that discussions over fonts and typefaces are over. Speaking at the Embedded Systems Conference (ESC) Silicon Valley, Vivek Vadakkuppattu, product management director for AR/VR and IoT at Monotype, said that the proliferation of screen devices like smartphones, tablets, and wearables, as well as emerging technologies like VR, AR, and even connected vehicles, should be making engineers think about fonts more than ever.

Monotype is a Massachusetts-based firm that focuses on font design and its application to technology. Through research conducted in conjunction with the MIT AgeLab Vadakkuppattu and his colleagues are seeking the best ways to implement text in several emerging use cases, most notably in industrial IoT, automotive, and medical devices. “Human-Machine Interfaces [HMIs] have a visual piece, but also a text piece,” Vadakkuppattu said. “This is something we get asked a lot. What can we do from a HMI standpoint to make text more usable? Can we do something to make text easier to process?”

In automotive and medical applications in particular, the role of text becomes all the more critical. If a user spends too much time reading text or if the text is too illegible that means time spent away from a much more important task – like driving or caring for a patient. For designers and engineers this also involves balancing legibility with the unique brand identity of a device or product.

“Think of your favorite brand like Tesla,” Vadakkuppattu said. “They have a unique look and feel. How do preserve that while ensuring legibility? It's a pretty hard balance to get to but it is critical.”

What Vadakkuppattu was discussing would seem obvious, but he said there has been surprisingly little in the way of hard scientific research done into how fonts impact the usability of devices. In 2012, Monotype published the results of a study done with MIT that showed the impact of font on glance time. Essentially, the researchers found that choosing the right font can significantly reduce distractions as well as “visual demand” on users.

In their study the researchers had subjects sit in a driving simulator with a touchscreen text display mounted above the dashboard. As the subjects drove they were prompted with a series of GPS-like menus, asking them to perform tasks like selecting a correct address from a list after a prompt. The researchers compared two fonts – TrueType versions of humanist (Frutiger) and square grotesque (Eurostile) – and measured various indicators such as glance time, error rate, distance of readability, and physical strain (how often a subjected blinked) for each font. Results showed that the “humanist” typeface resulted in a 10.6% lower visual demand in men and 3.1% lower error rate in men and women compared to the “square grotesque” typeface.

For Vadakkuppattu this brings up a number of considerations for interface design. “Can we do things differently from a design standpoint to cater to different audiences?” he asked. Meaning, is it possible for designers and engineers to develop devices that can be customized and personalized based on a number of user qualities, from native language to even age.

Making a font legible relies on a number of factors Vadakkuppattu told the audience. Inter-character spacing plays a role, as well as the openness of shapes, “For example, a more open “C” versus a more closed one makes it easier to figure out what that character is,” he said. Varying proportions and creating unambiguous forms are also key factors. It's the reason someone reading this can tell “9” is the number nine and not the lowercase letter “g.”

And with all this comes a number of challenges, beyond the quality of text. Vadakkuppattu discussed the challenge of localization with fonts as well. “When transitioning from English to Chinese, for example, you talking about going from 26 characters to almost 30,000,” he said. “And even the orientation of reading changes depending on the language. In the Indian language the way you shape a character depends on what characters it is surrounded by. There's a lot of complexity and having an operating system can do this for you, but there are things like medical devices that have no operating system.”

And technologies like VR, AR, and mixed reality are bringing their own unique challenges, as well. “With VR you want typefaces that blend in with the application,” Vadakkuppattu said. “But with AR and mixed reality you have no way of predicting the background – it could be anything. So the question then becomes how do you build an interface that can scale to different backgrounds.”

For engineers looking to develop in in this space today Vadakkuppattu advised that there a lot of open-source options for VR and AR fonts, as well as a variety of AR software development kits (SDKs) out there. Montotype and MIT AgeLab are also part of a growing network of companies and institutions looking into this issue called the Clear Information Presentation (Clear-IP) Consortium that was formed to “examine issues of typographic and visual design through a scientific lens, while always keeping an eye on the practical applications of the research.”

Asked about moving to other modes of user communication such as audio or voice over text Vadakkuppattu admitted they could be more useful in certain use cases, for example when you have a user who is vision impaired or disabled. However, these modalities also come with their own challenges, such as creating clear, understandable audio across a variety of use cases.

For now, Vadakkuppattu said, focusing on text is the best way forward in order to tackle a wide range of industries. “As we look to design HMIs for the future it's going to be increasingly important that we are making the right decisions in terms of font and technology so we can make things that can scale,” he said.