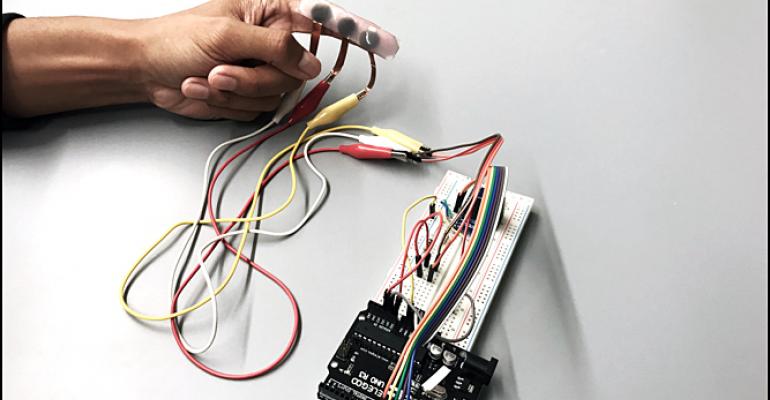 The self-healing power of the robot in the film “Terminator 2” has inspired the design of a wearable, liquid-based energy harvester for self-powered devices.

Inspired by a special effect seen in the film “Terminator 2,” a researcher at Purdue University has developed liquid-based wearable technology that can harvest energy for self-powered devices.

Wenzhuo Wu, an assistant professor of industrial engineering at the university, said that as a child he was “fascinated by the shape morphing capability of the T-1000” robot made of liquid metal in the famous Arnold Schwarzenegger film, so much so that he wanted to do something similar when he became a scientist.

He ran into one problem, however. “Most all of the reported uses/studies of liquid metal—mostly Galinstan, a eutectic alloy—only use liquid metal as a stretchable conductor, without utilizing its other functions and properties,” Wu said in a Purdue news release.

He and his team already were researching the design of triboelectric nanogenerator (TENG) technology, which harvests electricity from the friction of two materials rubbing against each other to form a charge. During their work, they encountered numerous difficulties designing and developing stretchable, wearable TENGs with improved performance, Wu said.

At some point, however, the team realized that liquid represents the ultimate form of anything that can be deformable and morphing into different shapes. “Meanwhile, the ultra-thin native oxide layer existing on the liquid metal droplets endow our liquid metal inclusion (LMI) with excellent dielectric properties, desirable for a good TENG device,” Wu said.

What the Purdue team invented from this observation is an LMI-based TENG, appropriately called LMI-TENG. The Purdue team’s invention is comprised of a layer of liquid metal embedded functional silicone sandwiched between two Ecoflex layers, Wu said.

“The inherently deformable core-shell LMI is incorporated in the wearable high-dielectric-constant polymers,” he explained. “The LMI-TENG can effectively harvest and sense the biomechanical signals from the human body through the contact triboelectrification, a process that generates an electrical charge when two surface contact and separate, with co-optimized electrical output and mechanical deformability.”

Researchers published a paper on their work in the Journal of Materials Chemistry A. The team also demonstrated LMI-TENG based wireless media control system for a self-powered user interface, paving the way towards the design and development of self-powered human-integrated technologies, Wu said. These may include wearable devices and sensors; pervasive computing; advanced healthcare applications; human-machine interface; robotics; virtual reality; and other applications, he said.

“The devices can be worn on the human body, and harvest the mechanical energy from the body motion or muscle movement,” Wu said. The team plans to continue to advance the design and development aspects of its proof-of-concept application and is seeking partners to help it in its mission, Wu said.