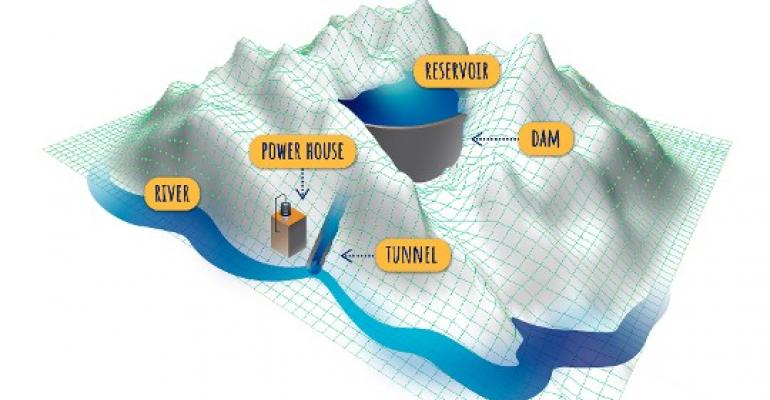 A new form of hydropower storage could be a viable option for storing solar energy for times when energy generation can’t meet demand.

Researchers are eyeing the world’s most basic element—water—as a potential solution for the challenge of how to store renewable energy for long-term use.

A team from the International Institute for Applied Systems Analysis (IIAS) has shown in new research that something called seasonal pumped hydropower storage (SPHS) could be an affordable and sustainable way to store both energy and water annually.

“The energy sectors of most countries are undergoing a transition to renewable energy sources, particularly wind and solar generation,” says IIASA postdoc Julian Hunt, one of the researchers on the project, in a press statement. “These sources are intermittent and have seasonal variations, so they need storage alternatives to guarantee that the demand can be met at any time.”

Hunt and his collaborators believe hydrogen is the most viable long-term energy storage to resolve these variations in electricity generation. However, this type of storage is not yet economically feasible, which is why the IIAS team set out to analyze SPHS from multiple perspectives to make a case for its use.

Researchers used computer modeling to provide the first global and high-resolution analysis of the potential and costs for SPHS technology, proving it could be a long-term option to store renewable energy during times when it isn’t as readily available as peak times, Hunt said.

SPHS requires pumping water into a deep storage reservoir--which must be built parallel to a major river--during times of high water flow or low energy demand. If water is scarce or demand for energy increases, the reservoir can release stored water to generate electricity.

The analysis done by the IIAS team took a global approach to where and how to store energy and water seasonably using SPHS, as well as what the costs might be to implement solutions. Researchers used topographical, river network and hydrology data, infrastructure cost estimation, and project design optimization, to identify sites that could work for SPHS deployments.

The team hopes their findings will help promote the use of SPHS to help the world adopt renewable energy over traditional fossil fuels and other types of power that are releasing harmful emissions and depleting valuable resources from the earth, Hunt said.

While the need for solutions like SPHS might not actually be as pressing as some believe, the research overall shows it can be a viable way to store renewable energy for times when energy generation isn’t meeting demand, said Edward Byers, another member the project team. “Concerns about the intermittency and seasonality of wind and solar can be valid, but are also sometimes exaggerated,” he acknowledged in a press statement. “This study demonstrates that there is an extremely high potential for SPHS to be used across much of the world.”

Researchers outlined their findings in the journal Nature Communications.

In their study, the team identified a number of mountainous areas on several continents where SPHS could be deployed and used, in particular in the lower part of the Himalayas, Andes, Alps and Rocky Mountains. Analysis also showed that the northern part of the Middle East and the Ethiopian Highlands and Brazilian Highlands also could work as sites, as well as locations in Central America, East Asia, Papua New Guinea, and the Sayan, Yablonoi and Stanovoy mountain ranges in Russia.

The team’s analysis also came up with some cost projections for how much it would cost to store energy in SPHS plants, taking into consideration dam, tunnel, turbine, generator, excavation, and land costs.

Another aspect of SPHS that researchers analyzed is the environment impact on constructing SPHS reservoirs and sites. What they found is that these type of reservoirs impact the environment 10 to 50 times less than traditional hydropower plants because they are deep and constructed parallel to rather than within the course of a river.