Uber Will Put Nvidia Under the Hood of its Autonomous Cars 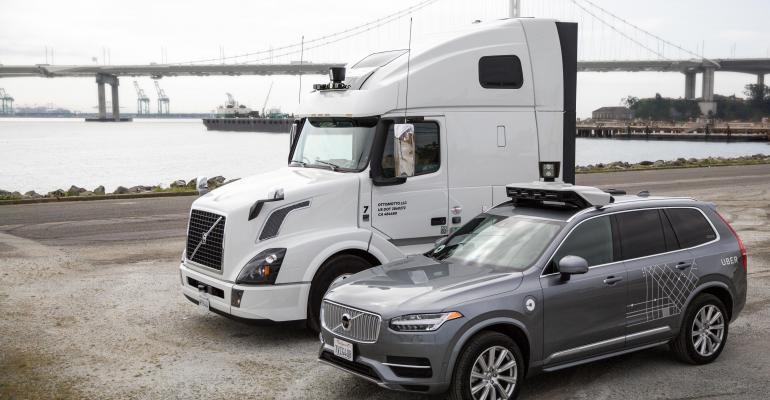 Uber has announced that its fleet of self-driving vehicles will be driven by Nvidia AI computing systems.

Nvidia and Uber have entered into a partnership that will make the chipmaker's GPUs the processors of choice inside the ride-sharing company's fleet of autonomous cars and freight trucks. The announcement came out of the 2018 Consumer Electronics Shows (CES) and marks a significant step in Nvidia becoming a major supplier of processing technologies for self-driving vehicles as its Drive PX series of autonomous vehicle computing platforms will be the brains of Uber's self-driving cars and trucks.

While Uber has built its name providing ride-hailing services with human-driven vehicles, the company has been actively developing artificial intelligence technology targeted at self-driving vehicles since 2015. Since then Uber has conducted autonomous vehicle trials in Pittsburgh and Phoenix. According Uber, self-driving cars flying its banner have logged more than 50,000 passenger trips and more than 2 million autonomous miles to date, with the most recent million miles being driven over the course of 100 days.

Meyhofer touches on something important to remember about Uber.  At its core Uber is a software company and its flagship product is a mobile app. The company does not manufacture or provide any automotive or computing hardware. As such, Uber has had to rely on third parties on the hardware end to bring its autonomous vehicle ambitions to fruition. The cars come via a partnership with Volvo, which provides Uber with its XC90 SUVs. And Uber's lesser-known autonomous freight truck division was born out of a 2016 acquisition of Otto, a San Fransisco-based startup that produces kits for converting long-haul trucks into autonomous vehicles.

Volvo has a prior standing partnership with Nvidia. In 2016 Volvo began implementing Nvidia's Drive computing platform for autonomous vehicles into XC90 model SUVs as part of a pilot program. Factor in that Otto's initial tests were done using Volvo VNL 780 trucks and it would seem the new partnership between Uber and Nvidia was likely a matter of matchmaking. (“Uber, you should you meet my friend Nvidia!”)

This is only the latest in a series of strategic moves on Uber's part to position itself to compete with big names like WayMo (Google), GM, and Ford in the self-driving vehicles space. Back in November Uber open-sourced Pyro, its proprietary programming language for machine learning, in a move meant to spur wider development in the engineering  community toward programming AI for autonomous vehicles – but with Uber's technology, of course.

Nvidia has already established itself as a major player in AI processors in recent years. At CES 2018 Nvidia also announced a partnership with Volkswagen to integrate the Drive platform into the new I.D. Buzz, Volkswagen’s reimagining of its classic MicroBus, for “Intelligent Co-Pilot” applications including ADAS, sensor integration, and driver facial recognition for unlocking the vehicle. The PX Pegasus, the latest in the Nvidia's Drive PX series of autonomous vehicle computing platforms, is aimed specifically at enabling level-5 autonmous vehicles. According to Nvidia, 25 companies are currently using some version of the Drive PX to develop level-5 self-driving technology.