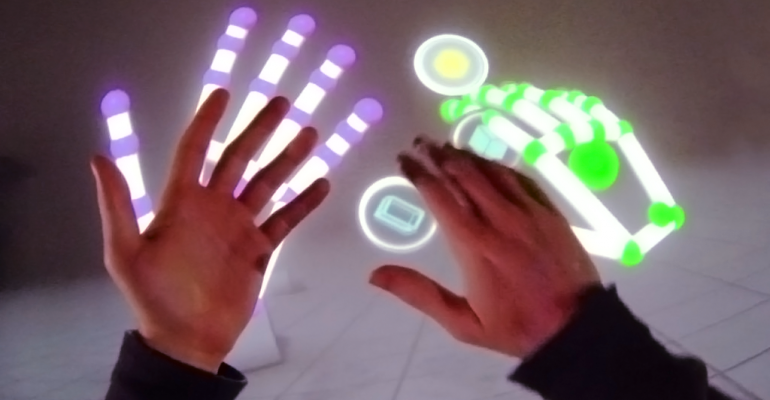 <p><strong><a href="https://www.ultraleap.com/" target="_blank">Ultraleap</a></strong></p><p>Ultraleap, formed by a merger of <a href="https://www.designnews.com/electronics-test/together-ultrahaptics-and-leap-motion-could-transform-how-we-interact-devices/185843630860969" target="_blank">Ultrahaptics and Leap Motion</a>, two companies exploring novel ways to enable hand tracking and haptic feedback in VR/AR and other applications. We're probably still quite far away from the company's ultimate goal – gesture-control interfaces that provide a sense of touch and haptic feedback without gloves or other user-worn hardware, but the company is making steady strides in that direction. Pimax, makers of high-resolution 8K VR headsets, has announced it will be integrating Ultraleap's hand tracking sensors into its products going forward. Ultraleap is also engaging with automotive companies to create mid-air haptic interfaces for vehicle dashboards.</p><p><em>(Image source: Ultraleap)</em></p>
Ultrahaptics' acquisition of Leap Motion could lead to innovative technologies that transform how we use VR and AR, devices, and even our cars.

Leap Motion's acquisition by Ultrahaptics could be seen as the curtain call of a novel startup. Or it could be the first step toward a new innovation in machine interactivity. Separately, Leap Motion's hand-tracking technology and Ultrahaptics' mid-air haptic feedback technology already offer some novel implications for VR, AR, and device interaction. But combined they could create something right out of science fiction – the ability to feel and manipulate virtual objects without the need for gloves or other wearables.

While Ultrahaptics hasn't laid out any plans for a specific product yet, it's clear from statements from company CEO Steve Cliff that this is their line of thinking.

“Together, Ultrahaptics and Leap Motion products have the opportunity to be at the global epicenter of spatial interaction. Taking a holistic view of this exciting market, not only can we continue to create two hugely significant technologies, but we can max out the potential of combining them,” Cliff said in a press statement regarding the acquisition.

Many will remember Leap Motion as the startup that garnered a lot of attention in recent years due to its innovative sensor and software technology that tracked the hand movements of VR and AR users, down to each finger, without the need of a glove or external controller.

Leap Motion shipped its first sensor product The Leap Motion Controller – a peripheral that could be added onto computers or other devices. Despite seeing some product integration, as in the XTAL headset from VRgineers, the product was never able to garner a strong use case. The controller was also criticized for its limited range and inconsistencies with interactions.

In 2018, the company released North Star, an augmented reality headset with hand-tracking capability designed as a development platform for creating AR systems.

The buzz around Leap Motion was so strong that it even attracted the attention of Apple, which moved to acquire the company on at least two separate occasions. Both times Apple's advances were rebuffed by Leap Motion's founders, David Holz and Michael Buckwald, who reportedly did not wish to work with Apple. Sources speaking to Business Insider also speculated that Apple was less interested in Leap Motion's technology than in acquiring the talent behind it to work on other projects.

After the failed acquisitions by Apple, Leap Motion remained relatively quiet, until late May, when the company announced it was being acquired by UK-based Ultrahaptics. According to The Wall Street Journal, Ultrahaptics bought Leap Motion for a song – paying an estimated $30 million, only a fraction of the company's nearly $300 million valuation at its peak.

But Ultrahaptics seems a better match for Leap Motion than Apple. Ultrahaptics also works in the hand-tracking arena, albeit from a different angle than Leap Motion. The company utilizes ultrasonic technology to give users a tactile sensation for virtual objects. A plate-like sensory array emits ultrasound waves onto a user's hand – giving the sensation of touching a virtual object on screen.

While the implications for AR and VR are clear, the company is also expanding its technology into other use cases such as retail and automotive. In 2018 Ultrahaptics released Stratos, a plug-and-play module designed to add haptic feedback to digital signage, touch displays, and other device interfaces. The company is also actively researching and experimenting with automotive applications of its technology and has developed concept cars that use haptic interfaces for touch-free control and reducing driver distraction.

So on one hand (pun intended) we have a company that has developed hand-tracking technology. On the other, you have a company working in mid-air haptics. If the companies were able to marry the two it's not difficult to imagine the implications not only for VR and AR, but for wider control interface applications.

Imagine VR and AR games that let you feel when you're holding an object or getting hit. Or virtual design and training environments that let you feel real weight and feedback from tools and parts. Kiosks and installations in airports and other venues could use mid-air gesture control, but with a degree of feedback to simulate the feel of pressing a real button.

The value for some of these use cases has already been demonstrated. HaptX, a developer of haptic gloves for VR training, design, and simulation recently partnered with London-based Fundamental VR to add haptic feedback to Fundamental VR's training simulations for medical professionals.

The Fundamental VR/ HaptX platform uses gloves to give trainees a realistic sensation of holding a virtual surgical tool or instrument. It is currently deployed in several medical insitutions around the world including Mayo Clinic, UCLA, and University College London Hospitals (UCLH).

The potential of a union of Ultrahaptics and Leap Motion's technologies is scenarios just like this one...only without the gloves.

Whether those ambitions can be realized or if the two technologies will continue as separate products under one company umbrella remains to be seen. However, in his own statement regarding the acquisition, David Holz, co-founder and CTO of Leap Motion, expressed optimism for what the future may hold. “We’ve been the undisputed leaders in our respective spaces from the beginning and this marks an exciting new era of even greater technologies and more physical, intuitive experiences.”