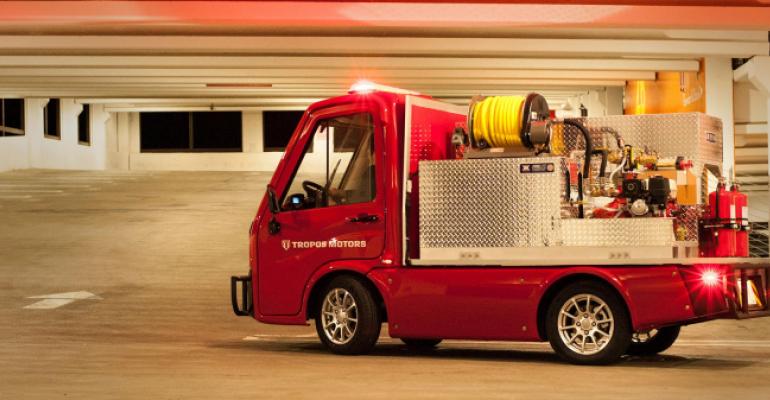 For a company to put out a new product involves a substantial amount of imagination and effort to first conceptualize, and then actualize, something that works to provide new value to customers. It also entails a certain degree of risk: Will customers buy it? Those questions loom even larger when a company puts forth a whole new category of product—even if it’s in an industry as enormous as the automotive business.

But that's exactly what John Bautista III, CEO of Tropos Motors, has done. An engineer with a lifetime of experience in electric drives—including a stint as director of mechanical engineering at Zero Motorcycles—Bautista convinced Cenntro Motors that there was a lucrative niche in the utility vehicle market for a small, low-speed electric vehicle.

Bautista was supporting Cenntro in product development at the time as the director of technical operations at KLD Energy Technologies. The niche he saw lay between the utility carts made by companies like Cushman and GEM and regular pickup trucks. The performance gap between the two in terms of power, speed, comfort, range, and load-hauling ability was big enough, figured Bautista, to drive a truck through—at least a small one, anyway—while maintaining the advantages of electric propulsion.

The truck is small enough to drive through a standard double-door and operate indoors. Given its total lack of emissions, it is completely safe to do so. Earlier this year, Tropos was spun off to provide these vehicles to the U.S. market. Bautista sees a big opportunity on corporate or institutional campuses.

Perhaps the biggest innovation behind this product is its flexible Easy-Swap configuration. The same chassis can be used to carry any of these configurations that are swappable in the field including: a sweeper truck, a pickup truck, a cargo van, and a trade configuration with a flat bed and overhead rack for ladders, pipes, etc. If that wasn't enough, there are emergency vehicle configurations including a fire response vehicle—equipped with a tank, pump, hoses, and a foam delivery system—and an ambulance. Bautista pointed out that this fire truck is the only one that can drive directly into any underground parking garage, should there be a need.

One could think of this as a Swiss army knife of trucks, but Bautista said he was thinking more of a smartphone as his inspiration—the way it serves as a platform for an ever-growing series of useful applications. The pickup version cost roughly $16,000.

Not one to rest on its laurels, Tropos introduced the ABLE XR a few months ago. It adds a 26-kWh lithium battery, extending the range to 160 miles and the speed to a max of 45 mph where allowable. (Vehicles in this LSV category are required to maintain 25 mph on public roads due to safety considerations. However, on private campuses, higher speeds could be allowed.)

In order to support this higher speed capability, the ABLE XR is equipped with a number of additional safety features including a load sensing brake proportioning system, hill-hold, reinforced doors, full-length steel chassis, and a driver side airbag. The larger battery capacity also allows for full HVAC functionality in the cab, along with Bluetooth phone connectivity and backup camera. It also is telematics ready—an important feature for fleet vehicles. (Surely, there will be one.)

Many companies and institutions, said Bautista, "are downsizing their fleets. But not in the way you’d think." They are not so much reducing the number of vehicles as moving to smaller, more efficient vehicles.

It seems all but certain that these ABLE vehicles will play well in that scenario, given their functionality, flexibility, energy efficiency, right size for the job, and—as is the case for all electric vehicles—extremely low maintenance requirements.

RP Siegel, PE, has a master's degree in mechanical engineering and worked for 20 years in R&D at Xerox Corp. An inventor with 50 patents and now a full-time writer, RP finds his primary interest at the intersection of technology and society. His work has appeared in multiple consumer and industry outlets, and he also co-authored the eco-thriller Vapor Trails.