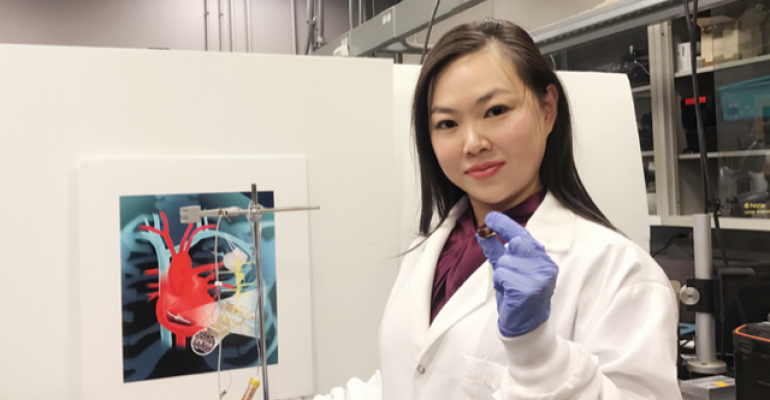 Researchers have developed a tiny device that can be integrated into pacemakers to harvest energy from the heart, eliminating the need for batteries.

It’s helpful when medical devices transplanted inside the human body don’t have bulky batteries weighing them down or making them user-unfriendly. This is why researchers are looking for natural sources of energy that can be used to power these devices.

A team of collaborators from Thayer School of Engineering at Dartmouth and UT Health San Antonio is the latest to come up with technology for this purpose with the development of a dime-sized invention that can convert the kinetic energy of the heart to electricity, said Lin Dong, a Dartmouth research associate who worked on the project.

“The energy-harvesting device could harness the energy from the heart towards conversion into an electrical power, which will be used for charging the implantable biomedical devices, such as pacemakers,” she told Design News.

Indeed, millions of people rely on pacemakers, defibrillators, and implantable devices powered by batteries that require costly and potentially illness-inducing surgery for replacement every five to 10 years. The device the Dartmouth team developed could help people with these types of devices avoid that surgery and any complications it might bring, researchers said.

Specifically, the device is meant to be integrated into pacemakers, adding material to the device so the kinetic energy of the lead wire that’s attached to the heart can be converted into electricity. The added material is a type of thin polymer piezoelectric, PVDF, that—when designed with porous structures—can convert even small mechanical motion to electricity.

“[The design] uses dual-cantilever structured thin films made of piezoelectric materials for effective conversion of kinetic energy into electrical energy,” Professor Zi Chen told Design News. “The heart's motion results in the motion of the pacemaker lead and hence the deformation of the thin films, which then is converted into electrical energy by virtue of the piezoelectric material--porous PVDF-TrFE thin film.”

This energy-harvesting device is biocompatible, and also is compatible with the implantation approach used with existing pacemaker leads, he said. It also does not require additional surgeries, and is safe for patients to wear, Zi said.

An added benefit to the technology is that the same modules that harvest energy could potentially be used as sensors to enable data collection for real-time monitoring of patients, researchers said. The team published a paper on their work in the journal Advanced Materials Technologies.

Researchers already have tested the device on animals with successful results, they said. They have a five-year National Institutes of Health (NIH) grant to work on the device until 2021 and aim to finish the pre-clinical process and obtain regulatory approval for human clinical trials and eventual commercialization.

“Next, long-term animal studies will be carried out before clinical studies with humans, Dartmouth Professor John XJ Zhang, a lead researcher on the project, explained. “For example, the animal is allowed to undergo normal physical activity over the course of weeks to understand the impact of daily life on the device’s stability and energy storage.”

“The outcome of the two remaining years of NIH funding will complete all pre-clinical tests and pave the way for human trials,” he added.