The ThinkReality A6 Is Lenovo's Entry Into Enterprise AR 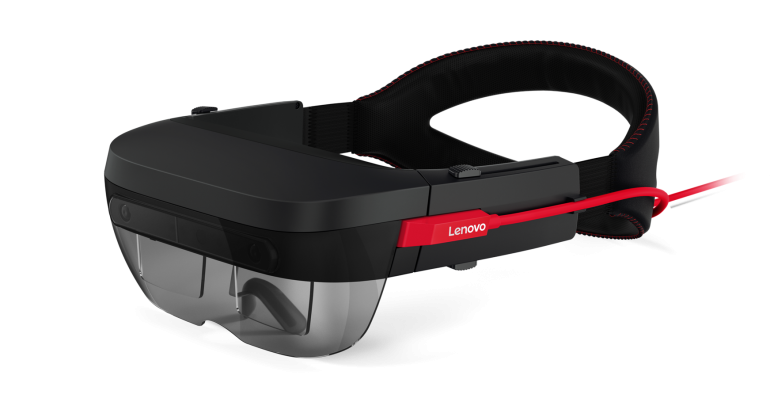 The ThinkReality A6 is Lenovo's first venture into enterprise AR. But how will the company fit into the larger enterprise AR/VR landscape?

Having already entered the consumer AR and VR markets, Lenovo is now tackling enterprise. The company has announced its first AR headset, the ThinkReality A6, which will be released through its new ThinkReality division, a sub-brand focused on AR hardware and software for enterprise.

While no specific release date or pricing information has been released yet, this is a clear move by Lenovo to enter the AR enterprise space currently occupied by the likes of Microsoft's HoloLens with a particular focus on industrial as well as the architecture, engineering, and construction (AEC) spaces. Lenovo is touting the usual benefits in terms of offering workers real-time remote training and assistance, as well as data visualization and 3D product design – all with the ultimate aim of saving time and costs and increasing productivity.

On the software developer side, the ThinkReality A6 runs on the Android Oreo OS, which could also make it more attractive to third-party software developers, as well as users who may not want to be locked into Microsoft's Windows 10 / Mixed Reality ecosystem. In a press statement, Lenovo said the A6 is designed to be “device and cloud agnostic, making it easy for enterprise customers to adopt and manage AR and VR software applications across multiple operating systems, cloud services, and devices.”

Under the hood, the ThinkReality A6 runs on Qualcomm's Snapdragon 845, the first of Qualcomm's line of chips targeted at enabling advanced applications for mobile AR and VR such as six-degrees-of-freedom (6DoF) tracking and integrated simultaneous localization and mapping (SLAM) for mapping user environments and tracking a wearer's head movements.

While the A6 does take advantage of the Snapdragon 845's integrated SLAM technology, according to Lenovo specs, it only opts for three-degrees-of-freedom (3DoF) inside-out tracking. 6DoF is preferred by many users for the ability to track head orientation and position, but perhaps Lenovo decided 3Dof, which only tracks head orientation, would be sufficient for enterprise applications.

Lenovo opted to use an Intel Movidius VPU for the A6's visual processing. While it's difficult to compare any VPU to the holographic processing unit (HPU) found in the HoloLens (mainly because of Microsoft's secrecy around the chip), the Movidius and HPU both compare in one key area – the ability to handle machine learning processing. Microsoft has said the HoloLens 2's HPU incorporates an “AI coprocessor” capable of handling deep learning neural networks. By contrast the Movidius X from Intel is touted as the company's first to feature a proprietary “Neural Compute Engine” that is also dedicated to handling deep neural networks and computer vision applications.

Incorporating AI processing into an AR headset goes a long way in extending its object and feature recognition abilities. In product design, for example, the headset could learn product specs and assist designers with flagging errors or flaws. In training applications the headset could be taught to recognize and call out specific tools a trainee may need to use. It could also learn to point out damaged or defective parts to repair technicians.

Keep in mind however ThinkReality is meant to be an entire product portfolio, not a single product. Perhaps there will be versions of the A6 that offer different options for users that require greater specs in the future. Prior to the ThinkReality A6, Lenovo's only other foray into augmented reality was its Star Wars: Jedi Challenge AR game platform. The significant specs of the A6 related to Lenovo's consumer efforts shows a serious effort to make an impact in enterprise AR.

There's also enterprise VR to consider. With its Mirage Solo standalone VR headset on the market as well, targeted at consumer applications, one wonders if Lenovo may be planning to release a comparatively high-spec'd VR product for the enterprise market under the ThinkReality umbrella in the future.

Lenovo said a ThinkReality developer program is forthcoming and the ThinkReality A6 will be launched in limited release sometime in the third quarter of 2019.