Tesla's New Model Y Is More Like a Car Than SUV 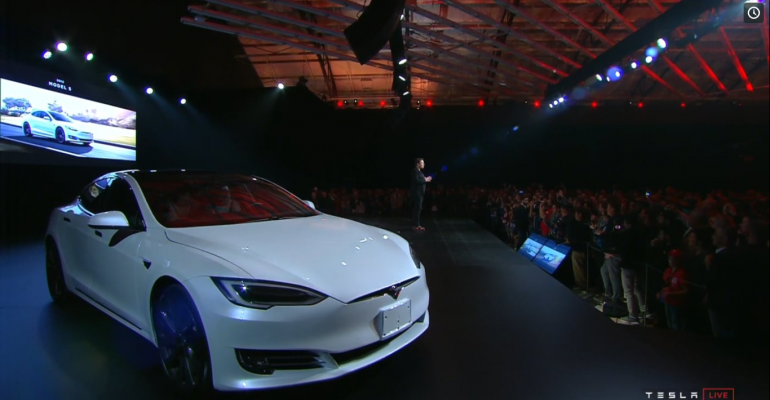 The Model Y battery-electric crossover from Tesla will be more car-like than many existing SUVs.

Tesla, Inc. CEO Elon Musk showed off the next piece of his plan to bring electric vehicles to the mainstream, unveiling the Model Y battery-powered crossover at the company’s design center in Hawthorne, California.

The Model Y, essentially a taller hatchback version of the Model 3 sedan, is considered by many to be an important step for Tesla because it provides the larger form factor desired by broader swath of today’s consumers. “It has the functionality of an SUV but it will ride like a sports car,” Musk told a cheering audience of enthusiasts on Thursday. “This thing will be really tight in corners. We expect it will be the safest mid-sized SUV in the world.”

Musk suggested the vehicle would have a low center of gravity, unusual among sport utility vehicles, which typically ride high. He also claimed it would have an extremely low drag coefficient of 0.23, enabling it to slip through the wind with greater efficiency.

During a brief on-stage appearance, Musk explained that a version of the Model Y with a 300-mile all-electric range would reach the market in fall of 2020, and a shorter-range version (230 miles) would arrive in spring of 2021. The long-range version would start at $47,000, while the shorter-range would have a $39,000 price tag, he said.

Referring to the company’s product portfolio designations, which will now contain an S, 3, X, and Y, Musk told supporters, “We are bringing sexy back, quite literally.”

Industry analysts were careful in their praise of the vehicle. “This could be their most profitable model, particularly if Tesla doesn’t fall into the traps it fell into with earlier models,” Mike Ramsey, senior director and analyst for Gartner, Inc., told Design News. “It doesn’t appear to be overly complex. And the deadlines for production, while not totally realistic, are not completely bonkers the way they were for the Model 3.”

The Tesla Model 3, which is now the country’s biggest-selling electric car, was plagued by numerous delays before it finally creeped into production in July, 2017.

Given the current consumer desire for SUVs and pickup trucks, the Model Y is taking a sensible direction, noted Sam Abuelsamid, principal analyst for Navigant Research. “In retrospect, this is the vehicle Tesla should have built first, before the Model 3,” Abuelsamid told us.

The Model Y most likely would go head to head with European electric SUVs, such as the Jaguar I-Pace and the Audi e-Tron Sportback, which is expected to hit the market later this year. But it is smaller and more car-like than some of the conventional gasoline-based SUVs, such as the Toyota RAV4 or the Honda CR-V, analysts said.

The question now is where Tesla will build the Model Y. Musk suggested in January that it would be produced in the company’s Gigafactory near Reno, NV. But the Gigafactory to date has been set up only for production of batteries and drive units. As a result, Tesla would need to install a body shop, paint shop, and other types of transfer lines. Such facilities could run into the billions of dollars, which might be difficult for Tesla to raise in its current state.

In that sense, the Model Y may depend heavily on the success of the Model 3, which has posted lower sales in the first quarter of 2019, Abuelsamid said. “If demand for the Model 3 stays low, then Tesla will struggle to reach profitability and positive cash flow,” he told us. “And that would make it harder for them to build the Model Y.”