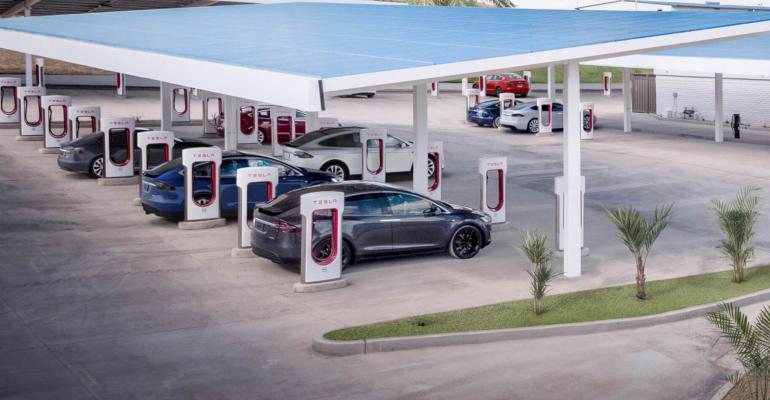 Capable of adding up to 1,000 miles of distance per hour of charging, Tesla’s new Supercharger system moves the bar a bit closer to public acceptance of vehicle electrification.

The time it takes to recharge an electric vehicle (EV), particularly on a long trip, continues to be one of the stumbling blocks for public acceptance of electrification of transportation. To address this, Tesla is going to be rolling out V3 Supercharging, a system that allows an addition of up to 1,000 miles of range per hour of charging. V3 Supercharging has started with a beta site in the San Francisco Bay Area and will be available incrementally across the US in the coming months and weeks.

According to Tesla, the V3 uses a completely new architecture, using a 1 megawatt (MW) power cabinet that can support peak charging rates of up to 250 kilowatts (kW) per car. This would allow a Tesla Model 3 Long Range, for example, to recover up to 75 miles of charge in as little as five minutes. Each 1-MW cabinet can support up to four cars at a time, each charging at their maximum rate. Tesla says that, “With these significant technical improvements, we anticipate the typical charging time at a V3 Supercharger will drop to around 15 minutes.”

A liquid-cooled charging cable allows the high rate of charging to take place without overheating the charging equipment. This is similar to the liquid-cooled cables in use by Electrify America for its high-rate charging network.

Tesla also announced that it will unlock 145-kW maximum charging capability at its V2 Supercharging stations in the coming weeks.

Warming Up is Part of the Answer

Another reason that the time spent charging has been reduced is a new software feature. According to a company press release, “Tesla is rolling out a new feature called On-Route Battery Warmup. Now, whenever you navigate to a Supercharger station, your vehicle will intelligently heat the battery to ensure you arrive at the optimal temperature to charge, reducing average charge times for owners by 25%.” Because the change is to the vehicle software, it can be sent to all Tesla vehicles via an online update.

Tesla claims to have more than 12,000 Superchargers across North America, Europe, and Asia, and that more than 99% of the US population is covered by its network. The Supercharger network also covers more than 90% of the population in China. By increasing the charge rate at Supercharger stations, with each vehicle spending less time on charge, the number of vehicles that can be charged per day is significantly higher. This not only benefits Tesla owners, but by extension, shows what is possible and creates a goal for other charging networks worldwide to work toward.

V3 Supercharging will be initially available with Tesla's highest-volume vehicle, the Model 3, and will roll out to the Model S and Model X in the coming months. The company says that it will ramp up V3 Supercharging in North America in the second and third quarter of this year before coming to Europe and the Asian-Pacific region in this year’s fourth quarter.