Study: Partnerships Will be Key to Autonomous Vehicle Development 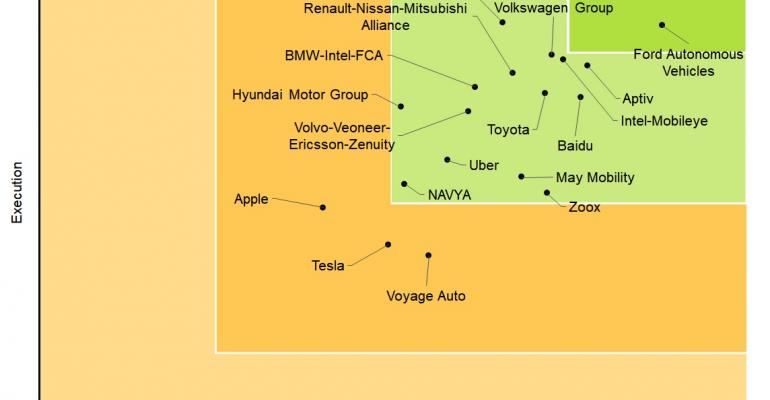 Leading companies are recognizing that the technology’s emergence will take longer than expected, and are looking for ways to spread development costs, study says.

A new study names Waymo, GM, and Ford as the top companies in autonomous car development, citing partnerships as a key reason for their early success.

The Automated Driving Vehicles Leaderboard from Navigant Research contends that partnerships will be important going forward, given the long-term commitment needed to put self-driving technology on public roads. “With the exception of Tesla, automakers are recognizing that it’s going to take longer than they thought to get this technology really robust and widely deployed,” noted Sam Abuelsamid, principal analyst and leader of the Navigant study. “The development costs are high and the near-term returns are going to be lower than what they expected two or three years ago. So they’re trying to figure out, ‘How can we spread out our costs and get more scale while we make sure this technology is going to work?’”

The study cited Waymo LLC (formerly known as the Google self-driving car project) as the autonomous vehicle leader, based on technical strategy and execution. It named GM Cruise and Ford Autonomous Vehicles as second and third, respectively. Other high scorers were Aptiv, Intel-Mobileye, Volkswagen Group, and Daimler-Bosch.

This year, the importance of partnerships became more evident, as manufacturers continued to forge bonds with competitors and suppliers. The study credited Waymo for teaming with Fiat Chrysler Automobiles and Jaguar Land Rover, as well as with Walmart, Avis, and others. Similarly, it cited GM for its acquisition of Cruise Automation and for its partnerships with Softbank, Honda, and DoorDash. It also gave Ford high marks for teaming with Argo AI, Lyft, and Postmates, as well as for entering talks of a possible partnership with Volkswagen.

Companies with weaker partner bonds, such as Tesla, Inc. and Apple, landed farther down in the study’s rankings.

A Long Road Ahead

Abuelsamid told Design News that many of the biggest players are now coming to a realization that the self-driving task will be more complex than was earlier thought. The concept of a completely autonomous, SAE Level 5 vehicle, able to drive anywhere under any conditions, is now being seen as a longer-term project, he said. “It’s proving to be problematic to get these things to operate reliably, for example, in poor weather conditions or outside urban areas,” he told us.

Abuelsamid added that the near-term scenario being discussed more often now is a Level 4 vehicle that operates in a “geo-fenced” area, and only under prescribed weather conditions. Level 5 cars that can go anywhere, anytime, are now being considered by many automakers in terms of a 2030 timeframe, or even later.

That viewpoint contrasts sharply with those expressed by automakers only a few years ago. Many predicted Level 5 cars would emerge in 2025, or even earlier. As recently as a few weeks ago, Tesla CEO Elon Musk predicted that his company would produce a completely autonomous car in 2020.

Partnerships would benefit automakers if those longer development schedules come to pass, Abuelsamid said. They would not only help manufacturers spread costs, they would aid in technology development, he told us. Increasingly, he said, automakers are realizing they will need multiple computers and multiple software stacks to compete with each other and check each other’s work.

“If one algorithm is not recognizing a person standing on the curb, and another one is recognizing it, then you know there’s an issue that has to be addressed,” he said. “Partnerships allow them to combine what they’re doing, without having to develop a separate software stack to run against the primary one.”

Abuelsamid said that in addition to Waymo, GM and Ford, many other contenders are now developing such partnerships. He cited Toyota’s partnership with Uber, Aptiv’s with NuTonomy, Intel’s with BMW and Fiat Chrysler, and Daimler’s with Bosch.

Still, all of the top 20 manufacturers on the Navigant list have developed formidable technology, Abuelsamid said. He noted that there are now more than 100 manufacturers creating autonomous vehicle systems worldwide, and more than 50 in California alone. “Just to be on the list shows some potential,” he said.