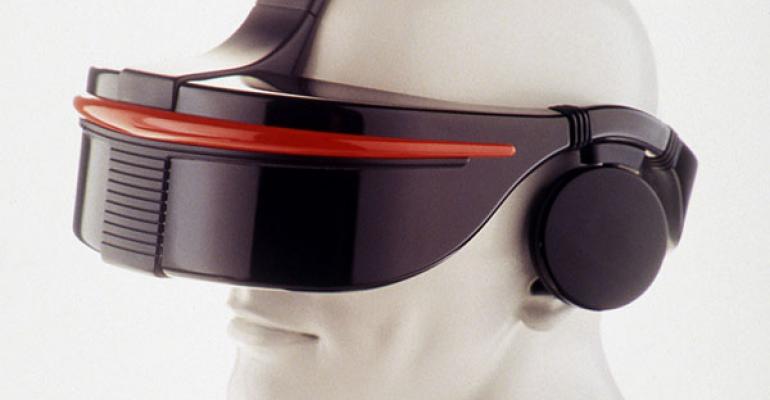 <p><strong>Sega VR (1993)</strong></p><p>In 1991 Sega, then one of the biggest names in video gaming, took the <a href="https://www.designnews.com/electronics-test/story-sega-vr-segas-failed-virtual-reality-headset/74451237860349" target="_blank">bold step</a> of trying to bring VR into homes with a headset for the 16-bit Sega Genesis home video game console. Sega created working headsets and even demoed it at conventions. Alas, the Sega VR was <a href="https://www.designnews.com/electronics-test/story-sega-vr-segas-failed-virtual-reality-headset/74451237860349" target="_blank">never released</a> due to various issues. The hype around Sega VR did however demonstrate that there was a definite hunger for some sort of consumer, home-based VR entertainment system.</p><p><em>(Image source Wikimedia Commons /Sega)</em></p>
In 1991 video game giant Sega tasked its engineers with creating what would have been the first consumer VR headset. But the Sega VR was never released. Here's why.

With all of the excitement around VR and augmented reality (AR) happening today it's easy to forget the same thing almost happened nearly 30 years ago as well. Anyone who followed video games and consumer electronics in the 1990s might remember the level of buzz that was surrounding VR at the time, particularly for its potential in video gaming.

At that time Sega was a household name when it came to video games and its Sega Genesis was the top selling console. So it made sense that the company would look to break new ground in the market. And with VR installations from companies like Virtuality appearing in malls and arcades across the country, it was clear that whoever could successfully bring VR into homes would be nearly untouchable in the video game market.

In 1991 Sega began development on a home VR headset, the Virtua VR (later rebranded to simply Sega VR), with a planned release only two years later. Though the Sega VR never hit store shelves, its development is a fascinating engineering story of overcoming hardware limitations and finding novel solutions to expensive problems.

By today's standards the Sega Genesis barely competes with even the lowest-end cellphones in terms of computing power. But in its heyday the Genesis was considered a sports car as far as home video gaming went.

But even the powerful Genesis didn't have what it took to run VR at the level of quality and fidelity seen in the Virtuality and other machines that introduced arcade gamers to VR in the 90s. Despite some issues with weight and comfort in their headsets, these arcade machines actually delivered quite well on the promise of VR with immersive 360-degree environments and fast-paced gameplay. The only problem was these machines cost upwards of $70,000 to purchase and install (and cost much more than 25 cents to play). This was due to the sensor technology that allowed for head tracking being so expensive at the time.

Obviously, Sega's customers weren't going to be taking out a second mortgage for a VR headset so the company set its engineers to work on solutions that would deliver the same level of quality at a fraction of the price. The Sega VR had a target price of $200 – putting it right in line with any other new game console or advanced peripheral available at the time. The Sega CD, for example, retailed for $299 on its initial release. What Sega was aiming to do was usher in a paradigm shift in home video gaming, at a very friendly price point.

Head tracking is essential to any true VR experiences. The ability to track a wearer's head movements around a 360-degree environment is key to immersion and is what separates today's lackluster mobile phone VR experiences from high-quality headsets.

Early versions of today's most popular VR headsets, including the Oculus Rift and HTC Vive, used external cameras (or “light houses') for this purpose. The latest headsets on the market feature inside-out tracking, meaning the camera array is embedded into the headset itself so the headset can track movement and position without external sensors.

Sega's engineers knew if the Sega VR was going to be viable they needed a way to do head tracking without the expensive sensors. They found that solution through technology created by a company called Ono-Sendai.

Ono-Sendai was a small electronics company that was working on its own VR headset, believing, like Sega, that the game consoles available at the time did indeed have the horsepower to deliver in-home VR. The company had come up with a novel sensing solution that Sega would later license for the Sega VR. Mark Pesce , Ono-Sendai's founder, said that the head tracking solutions available at that time cost upwards of $50,000. Ono-Sendai's solution, by contrast, only cost $1.

According to Ono-Sendai's patent, its head tracking solution combined an azimuthal sensor, created with a magnetometer, with a photodetector system consisting of a small sphere, filled with liquid and gas, with an LED and light sensors attached. The intensity of the LED light hitting the sensor would vary depending on how the sphere was titled (letting the light pass through more or less gas and liquid) by the wearer's head movement. Using the Earth's own magnetic field, the azimuthal sensor would determine the wearer's orientation while the photodetector would determine the degree of tilt.

Sega also made some other other crucial design decisions with the Sega VR, such as deciding to put the headset's processing hardware in an external interface box in order to keep the unit's weight as low as possible.

With the Ono-Sendai solution in place Sega was ready to go to market with its VR headset. By 1993 Sega VR had already been widely covered in video game and electronics magazines. It even graced the cover of the June 1993 issue of Popular Science.

Sega was set to have the hottest product release of the holiday season. And then...nothing.

As it turns out the Sega VR was getting some problematic reviews from test groups. Motion sickness and nausea are problems that VR systems, especially games, face to this day. And the Sega VR was no exception. Reports were coming in that the headset was making kids sick and giving them headaches. Sega was warned by research institutes that prolonged use of the Sega VR could constitute a hazardous risk.

It's not clear what actually caused these issues but it may have had something to do with the Sega VR's overall fidelity. Today's VR systems can render very high resolution graphics at very high frame rates and still have these issues. While Sega VR may have looked amazing for its time, the limitations of its hardware probably only expanded these issues.

Rather than role the dice on a potential public relations nightmare, Sega's then-CEO Tom Kalinske decided it would be better for Sega to cut its losses and not release the headset. When disappointed consumers wondered why the Sega VR had been canceled, Sega tried to save face by saying the VR had been too realistic and it was concerned that players would hurt themselves reacting to the virtual environments (not likely given what graphics looked like in 1993).

Sega did manage to port some of its VR technology into motion-sensing arcade machines around 1994, but the company never tackled the home VR market again. Today, Sega has left the console hardware market entirely and exists primarily as a software company.

Still, one has to wonder, what if Sega's VR ambitions had paid off? Would the VR bubble of the 90s have still burst? Or would be looking at a whole different landscape for VR today?