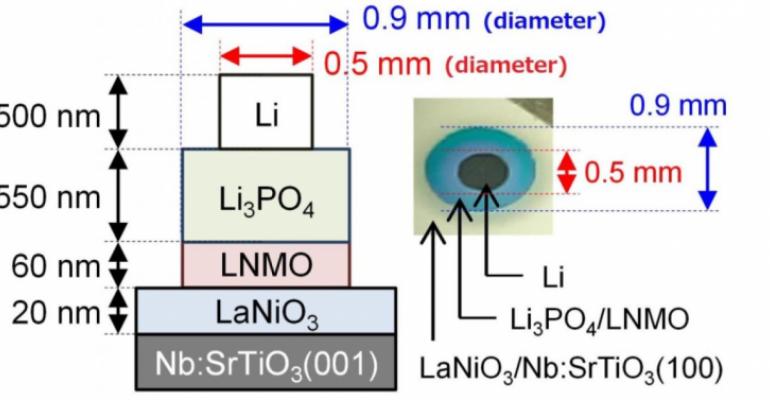 Just about everybody in the battery world is talking about solid-state batteries as the “next new thing.” Commercial lithium ion batteries power everything from cell phones to electric vehicles (EVs) and power grids. Yet the general consensus is that they are nearing the end of their development road and something new will soon be needed.

As an alternative to traditional lithium ion batteries, solid-state batteries are predicted to be safer and to have higher energy density. Solid-state batteries replace the traditional flammable liquid organic solvent electrolyte with a solid polymer or glass material that doesn’t burn and thus is safer. Typically, they also replace the graphite anode with a foil of lithium metal, increasing the energy density by a factor of two or more. But until now, the electrical resistance at the interface between the metal oxide that makes up the cathode (positive electrode) and the solid electrolyte is too high, generating heat and preventing fast charging and discharging.

Researchers at the Tokyo Institute of Technology and Tohoku University, led by Professor Taro Hitosugi, have developed a series of thin-film layers between the cathode material and the solid electrolyte that dramatically reduce the electrical resistance at the interface. The research from the two institutions was recently published in the journal ACS Applied Materials and Interfaces.

The test batteries were fabricated in an ultra-high vacuum by the thin-film deposition of layers of various materials. The cathode (positive electrode) was a lithium-nickel-manganese-oxide (Li (Ni0.5Mn1.5)O4 or LNMO). This material is considered promising because of its higher voltage potential (5 volts when used with a lithium metal anode) than the standard 4.2 volts produced by most current lithium ion battery chemistries.

Using X-ray diffraction and Raman spectroscopy, the crystal structure of the battery's thin films was analyzed. “Spontaneous migration of Li ions was found to occur from the Li3PO4 layer to the LNMO layer, converting half the LNMO to L2NMO at the Li3PO4/LNMO interface,” said the researchers, according to a press release from Tokyo Tech. The reverse migration occurred during the initial charging process to regenerate LNMO, according to the information in the release.

Perhaps more significantly, the electrical resistance at this interface—measured using electrochemical impedance spectroscopy—was found to be 7.6 ohms, normalized to the electrode area (Ω cm2 ). This is about two orders of magnitude smaller than that measure on previous LMNO-based solid-state batteries, according to the press release. It is even smaller than that of a liquid-electrolyte-based lithium ion battery using LMNO, according to Tokyo Tech. The researchers also found that the battery showed no degradation in its performance—even after 100 charge and discharge cycles.

Although care must be taken not to read too much into studies on very small scale batteries, the work by Professor Hitosugi and his team addresses one of the stumbling blocks in the further development of solid-state lithium batteries. If their solution proves workable when scaled up to the full-sized pouch and cylindrical cells in commercial usage, it could propel the development of the game-changing, much-anticipated, solid-state lithium battery.