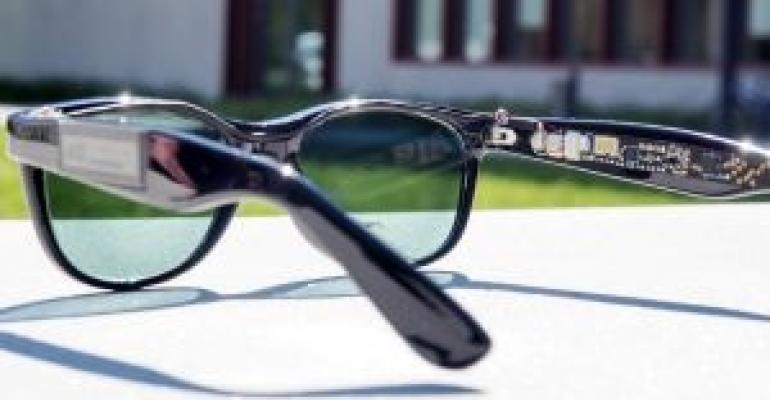 What if your eyeglasses not only protected your eyes from sunlight, but also absorbed its light to generate energy? That’s the idea behind new solar eyeglasses developed by researchers at the Karlsruhe Institute of Technology in Germany that can supply devices with electricity.

A team at the KIT Energy Center have taken advantage of organic solar cells, which are flexible, transparent, and lightweight, to explore the use of a new solar-energy-generating form factor--in this case, wearable eyeglasses, said Dominik Landerer, an engineer at KIT who worked on the project.

“Many people in the world wear eyeglasses every day,” he told Design News. “We thought it is a great idea to use this ‘area’--especially the lenses as the biggest area, for energy harvesting of sun or indoor light.”

The solar-cell lenses fit into the eyeglass frames have a thickness of about 1.6 millimeters and weigh about six grams—similar to typical sunglasses frames. Researchers integrated a microprocessor and two small displays into the temples of the glasses, power for which is provided by the cells. The displays show the illumination intensity and the ambient temperature as bar graphs.

“The user does not feel any difference to normal sunglasses since the solar cells appear the same as toned lenses,” Landerer said. The work demonstrates the use of organic solar cells for “consumer-oriented mobile applications,” he said.

In addition to working in outdoor sunlight, the glasses also can function indoor under illumination down to 500 Lux, the typical illumination of an office or a living area. Under these conditions, each of the lenses still generates 200 microwatt of electric power--enough to operate devices such as a hearing aid, researchers said.

The team published a paper about their work in the journal Energy Technology.

Landerer said that the research paves the way for the development of even smarter devices with more sophisticated functionality, with every-day, wearable devices being used to harvest solar power to provide mobile sources of electricity.

“In the range of the power output, applications like hearing aids, Bluetooth interfaces, or pedometers become realistic scenarios,” he said. “But the technology of organic solar cells themselves could probably also address some other markets like the Internet of things, self-sustaining sensors, wearables, or window integration.”

Organic cells have some notable differences to typical silicon cells. They are lightweight and thin and can be designed in different shapes and colors, which allows for various applications that silicon cells can’t accommodate.

However, one drawback is that they haven’t had the same power efficiency as conventional cells, although that is changing, Landerer said.

“Organic solar cells have been subject to intensive studies for almost two decades, undergoing not only tremendous improvements in power efficiency, but also a rapid development towards a commercial launch,” he said. “Beside the electric-power-generation capability of the solar cells, customization for different applications and user requirements are essential for the acceptance of organic solar cells in consumer electronics.”

For the eyeglasses, researchers used colored, semi-transparent organic solar cells that were optimized for the application, Landerer said.

“For the implementation in the solar glasses, the transparency and the color perception are particularly important criteria,” he said. “The semi-transparent solar cells allow excellent color perception, which make them perfectly suitable for sunglasses or windows.”

Researchers plan to continue their work with organic solar cells and related applications to focus on advancing fabrication techniques and the device architecture of the cells, Landerer added.