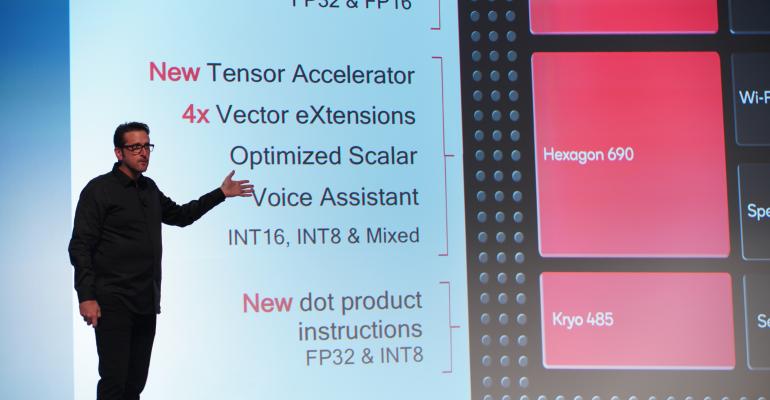 Qualcomm has unveiled the next generation of its Snapdragon family of processors, the 855 – the first chip optimized for bringing 5G connectivity to mobile devices in addition to enhanced functionality for artificial intelligence.

5G connectivity is coming. And so is the chip hardware to support it.

Qualcomm's top brass thinks there should be an equivalent to Moore's Law for connectivity. “Every decade, the global system moves the semiconductor industry, in terms of communications, to the next generation technology,” Keith Kressin, SVP of product management at Qualcomm, told a keynote audience at Qualcomm's 2018 Snapdragon Tech Summit.

Kressin's comments came as part of the reveal of the latest generation of Qualcomm's ubiquitous Snapdragon system-on-a-chip (SoC) family. And while the 855 offers the expected upgrades for mobile device users, such as improved battery life, camera performance, and more horsepower for entertainment like video and gaming, the particular focus of the 855 is being the first chip to bring 5G connectivity and functionality to mobile devices. It also enables higher function artificial intelligence applications.

Think of how quickly mobile apps have changed over the last few years. Today, consumers expect phones to handle tasks such as music and movie streaming without any sort of issues—functions that would have been herculean for devices even a decade ago.

The higher speeds and lower latency of 5G means a lot more data is coming into mobile devices a lot faster. In other words, the compute hardware is also going to have to improve if it wants to keep up and make efficient use of all that data.

Durga Malladi, SVP of engineering, 4G 5G, at Qualcomm told the Summit audience that the 855 aims to introduce the world to the era of “multi-gigabit wireless connectivity.” The new chip spans both millimeter wave (mm-wave) and sub-6 frequencies. It also offers users dual 4G and 5G connectivity, meaning devices will be able to simultaneously connect to both networks when they're available. With this new architecture, Malladi said Qualcomm wants to enable OEMs "to launch 5G deployments without considering which band they are worried about...The Snapdragon 855 simplifies things for device ecosystems. We have born all the complexity on our end so OEMs can focus on what they're best at: putting it all together.”

The 855 also offers improvements on LTE and WiFi connectivity. The multi-gigabit LTE is capable of achieving speeds of up to 2 Gbps. The 60-GHz millimeter-wave WiFi reaches speeds up to 10 Gbps and allows for improvements in the capacity, coverage, and range of WiFi, Malladi said. For the first time, users could experience WiFi connection speeds as fast as wired speeds.

All of these advancements, according to the Summit keynote speakers, have come about through Qualcomm's rethinking of chip architecture. The 855 is manufactured with a 7-nanometer process, which Travis Lanier, senior director of product management at Qualcomm, said allows for better battery life and more headroom in devices to integrate more features via dedicated, custom-designed hardware.

The 855 features a custom-designed CPU, GPU, and DSP hardware, all working in tandem. The Adreno 640 GPU offers 20 percent faster graphics processing than the previous generation Snapdragon, according to Qualcomm. It also features an integrated microcontroller for improved power management. The GPU offers 50 percent more arithmetic logic units for enhancing AI performance in the SoC.

The 64-bit CPU, the Kryo 485, features a new technology Qualcomm has dubbed “Prime Core." It is an extension of older technologies, allowing different cores within a CPU to run at different clock speeds. The prime core in question has a clock speed of up to 2.84 GHz and the CPU also features three performance cores running up to 2.42 GHz and four efficiency cores with clock speeds of up to 1.8 GHz. The keynoters did not go deep into the specific advantages offered by this architecture, but said the Kryo 485 offers up to a 45 percent performance improvement over the Snapdragon 845 and helps facilitate improved AI performance.

Last, but not least, is the Hexagon 690 DSP, which Lanier explained is intended to allow OEMs and partners “to create differentiating features around camera, video, audio, and XR [extended reality].” Here, Qualcomm says it has combined the functionality of a classic DSP with an AI-optimized processor—all on a single processor. The Hexagon 690 features a dedicated “Tensor Accelerator” intended to handle the complex matrix mathematics needed for AI applications right on the hardware itself. Rather than handling one operation at a time, Lanier said the Tensor Accelerator allows the 855 to complete entire neural network layers at a time.

“Every core in the Snapdragon 855 has been upgraded or optimized to deliver heterogeneous AI hardware acceleration,” said Gary Brotman, senior director and head of AI and machine learning at Qualcomm. He further explained that the Adreno 640, Kryo 485, and Hexagon 690 combine to form the backbone of Qualcomm's fourth-generation “AI Engine.”

The AI engine also supports the most popular neural network frameworks for developers including Onnx, Google's TensorFlow, and the Facebook-developed PyTorch.

All of this flies in what Brotman said is considered common knowledge in the chip industry—that the best way to facilitate powerful AI is with a single-core strategy and a narrow and closed ecosystem.

Brotman explained that the best strategy is to model chips after the human brain. Just as the various cooperating regions of the human brain are specialized for tasks, such as vision, hearing, and higher-level decision making, Brotman said Qualcomm's philosophy is that an AI chip should function in the same way—with different cores all working together.

Qualcomm is currently offering samples of the Snapdragon 855 Mobile Platform to customers and expects commercial devices featuring the chip to begin shipping in the first half of 2019.